The Ram Janmabhoomi-Babri Masjid case is centered around a controversial piece of land in the Ayodhya, Uttar Pradesh where Lord Ram (as believed by Hindus) was born. 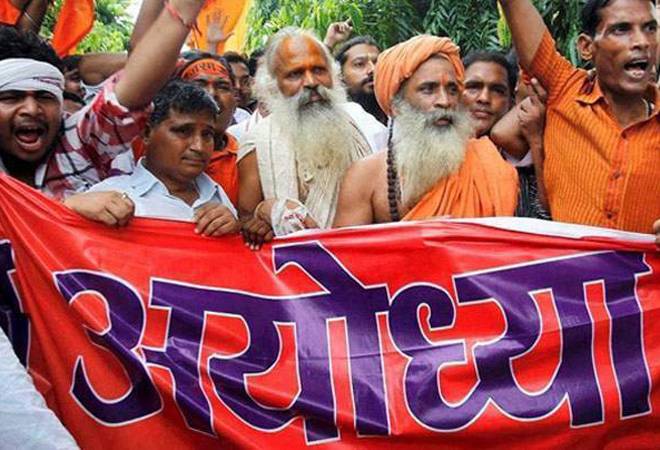 The Ayodhya case is a political and religious debate in India that has been at the centre of communal and polarization politics since decades.

The Supreme Court Wednesday reserved its order on the issue of referring Ram Janmabhoomi-Babri Masjid title dispute case to the court-monitored mediation.

The Ayodhya case is a political and religious debate in India that has been at the centre of communal and polarisation politics since decades.

A look at Ayodhya case history:

Ayodhya case contention- The Ram Janmabhoomi-Babri Masjid case is centered around a controversial piece of land in the Ayodhya, Uttar Pradesh where Lord Ram (as believed by Hindus) was born.

1528-The flashpoint between Hindus and Muslims regarding the religious site dates back to 1528 when a mosque was built on the site which Hindus claimed as the 'Ram Janmabhoomi' (Lord Ram's birthplace). Mir Baqi, one of Mughal King Babur's generals was said to have demolished a temple of Rama which already existed at the disputed site and constructed a mosque instead naming it Babri Masjid (Babur's mosque).

1853- Due to this contention between Hindus and Muslims, first recorded incidents of religious violence came about in the year 1853.

1859- The British colonial administration fenced the site to separate the worship places, where inner court was used by Muslims and outer court by Hindus. Meanwhile, the head of Nirmohi Akhara filed a petition before the district judge of Faizabad court to permit Hindus to pray to Ram Lalla inside Babri Masjid which was not granted.

1949- Hindus allegedly placed Lord Ram's idols inside the Babri mosque. This led to the Muslims' protests, with both the communities filing civil suits. The government proclaimed the site a disputed area and locked the gates.

1986- District judge in 1986 ordered the gates of the mosque to be opened to Hindus to worship Lord Rama which irked Muslims who then formed Babri Mosque action Committee in protest of the ruling.

1989- VHP heightened its campaign and laid the foundation of the Ram temple alongside the Babri mosque.

1990- VHP volunteers damaged the mosque partially inviting then Prime Minister Chandra Shekhar intervention who tried to resolve the matter through negotiations between the two communities but failed.

1991- BJP party comes to power in the state of Uttar Pradesh.

1992- The Hindu Kar-sevaks and supporters of VHP, the Shiv Sena Party and the BJP demolished the Babri Masjid leading to nationwide communal riots between the Hindus and Muslims.

2001- VHP pledged to build the Ram temple again at the disputed land on the occasion of the anniversary of Babri Masjid's demolition.

2002- The then Prime Minister Atal Bihari Vajpayee had set up an Ayodhya cell in his office and designated a senior official to hold talks with Hindu and Muslim leaders.

2002- Communal riots broke out in Gujarat following an attack on a train in Godhra which was carrying Hindu activists claiming at least 58 lives.

2003- The Archaeological Survey of India (ASI) began a court-ordered survey to find out whether a Ram temple existed at the disputed site and found evidence of a temple which Muslims objected to.

2003- An Uttar Pradesh (UP) court brought charges against seven Hindu leaders for inciting the demolition of Babri Masjid, but no charges were leveled against Advani.

2004- A UP court reversed an earlier order exonerating Advani for his alleged role in the mosque's destruction, ordered to review the ruling.

2005- Five suspected Islmaic militants attacked the Ayodhya site and tried to blow a hole in the wall of the complex with an explosive laden jeep.

2010- Allahabad High Court decreed the division and transfer of title in three equal parts of the 2.77 acres of the disputed land to three principal claimants, one-third to Muslims, Hindus another third and the remainder to the Nirmohi Akhara sect. However, Hindus got the main disputed section of the land which Muslims objected to and filed an appeal against in the court of law.

2011- The Supreme Court suspended High Court ruling after the Hindu and Muslim groups file an appeal against the 2010 verdict by the Allahabad High Court.

2017- The Supreme Court gave out its verdict, charging BJP leaders with criminal conspiracy and ordered the trial court in Lucknow to finish the hearing within two years.

February 26, 2019- The five-judge constitution bench by Chief Justice Ranjan Gogoi heard the matter February 26 and advocated an amicable resolution to the Ram Mandir case through mediation.

The apex court in its observation favoured peaceful dialogue to solve the contentious issue. Justice S A Bobde proposed the suggestion while hearing the case. "We are considering the possibility of healing relations between two communities. We, as a court, can only decide the property issue." Justice SA Bobde said.

March 6, 2019- The five-judge Constitution Bench of the Supreme Court reserved its order on invocation of Section 89 of the Code of Civil Procedure to attempt a court-monitored mediation in the decades-old Babri Masjid-Ram Janmabhoomi title suit.

Meanwhile, the lawyers of the Hindu parties had opposed the idea of mediation saying that such attempts had failed in the past, while the Muslim parties' lawyers voted for the negotiations if a regular hearing on the matter went on simultaneously.