Ministry of Finance's Revenue Department issued a circular with an opt-out clause, instead of making it voluntary 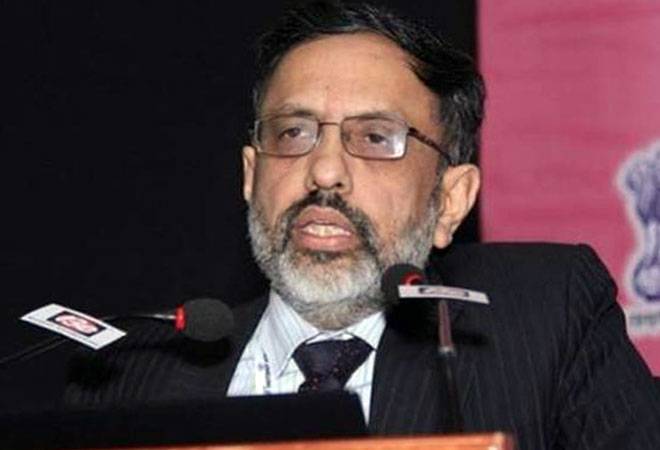 Seeking a 'noble gesture' from government of India employees, Cabinet Secretary Rajiv Gauba has written to secretaries in various ministries, asking them to urge employees -- as well as those in PSUs under various ministries -- to make voluntary contribution to PM CARES Fund. The letter was sent on April 16.

On April 17, Ministry Of Finance's Revenue Department issued a circular, asking employees to contribute voluntarily to the PM CARES Fund with an opt-out clause. "It has been decided to appeal (to) all officers and staff of Department of Revenue to contribute their one day's salary every month till March 2021..."

Any officer or staff objecting to the donation is required to inform the department with his/her employee code by April 20. "Any officer or staff having objection to it may intimate Drawing & Disbursing officer, Department of Revenue in writing mentioning his/her employee code latest by April 20, 2020," the Revenue Department circular said. The Ministry of Finance's Department of Revenue is led by Secretary Ajay Bhushan Pandey. 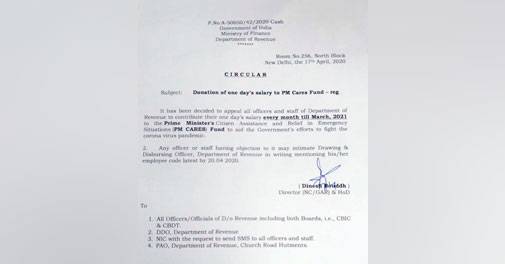 Gauba's letter noted that in the past, government officials had contributed minimum one day's salary during national emergencies.

"Hence, it will be appreciated if an appeal is issued at your level to all officials working in your ministry/department as well as in the attached/subordinate offices and public sector undertakings (PSUs) to contribute to government's efforts to deal with this unprecedented situation. The voluntary contribution of all the willing officials in the Ministry/Department, deducted at sources, may be sent to Prime Minister's Citizens' Assistance and Relief in Emergency Situation Fund (PM CARES Fund) through the PFMS mechanism," the top bureaucrat wrote.

It may be noted that a large number of government employees as well as those working with various PSUs have also contributed to the PM CARES Fund. A minimum of one day's salary has been given to the Fund.

Employees of many PSUs such as Steel Authority of India (SAIL) and NMDC have donated a minimum of one day's salaries to the newly-created fund to fight the menace of coronavirus. Steel PSUs alone have contributed over Rs 260 crore to the PM CARES Fund.

Ever since the relief fund was set up and Prime Minister Narendra Modi appealed citizens for donations, industrialists like Mukesh Ambani, Ratan Tata and filmstars like Akshay Kumar have announced their contributions. The central government employees of various cadres have also supported the noble initiative.

All the resources pooled together would be used to fight coronavirus, which has thrown the entire economy out of gear.