There is a mismatch between high-value export items in the world and that of India. From primary and low technology goods, India needs to shift focus to medium and high-tech goods by adopting new technologies and addressing some age-old impediments India's export has a large presence of primary goods and low technology products. Moreover, some of these items, like pharmaceuticals, oil products, auto components, and diamond are import-dependent.

The UNCTAD's Statistics and Trends in International Trade report of 2019 says the international trade in the past few years was marked by an anaemic growth (2012-14), then a downturn (2015 and 2016) and a strong rebound (2017 and 2018). The rebound was due to (a) a global upturn in output and investment and (b) recovery of commodity prices.

However, it warns that the future does not look bright because the global output is unlikely to increase substantially and commodity prices are projected to stabilise or even decrease. The second half of 2018 (financial year) has already shown a loss of momentum in both economic growth and international trade. Further, there is an "increased uncertainty" in trade with the weakening of multilateral trading system, the trade war between China and the US, difficulties within the European Union etc., all of which would weigh down on the future patterns of international trade.

This means more challenging times ahead of India. It would have to shift the focus away from primary goods like cotton, cereals, fish, meat etc., which figured in top 20 high-value export items in 2018 in US dollar terms, and low-tech products to high-value medium and high-tech manufacturing goods.

The WTO's World Trade Statistical Review of 2019, which analysed trade patterns between 2008 and 2018, says manufactured goods continue to dominate world trade with its share going up from 66% to 68% during this period. Of the other two key components, fuels and mining products went down from 22% to 19% and agricultural products went up from 8% to 10% during the period.

Analysis of trade data shows medium and high tech manufacturing goods dominating the world exports in US dollar term. The graph below presents the top 10 high-value export goods for three (financial) years -- 2016, 2017 and 2018. In contrast, India's export has a large presence of primary goods and low technology products. Moreover, some of these items, like pharmaceuticals, oil products, auto components, and diamond are import-dependent. 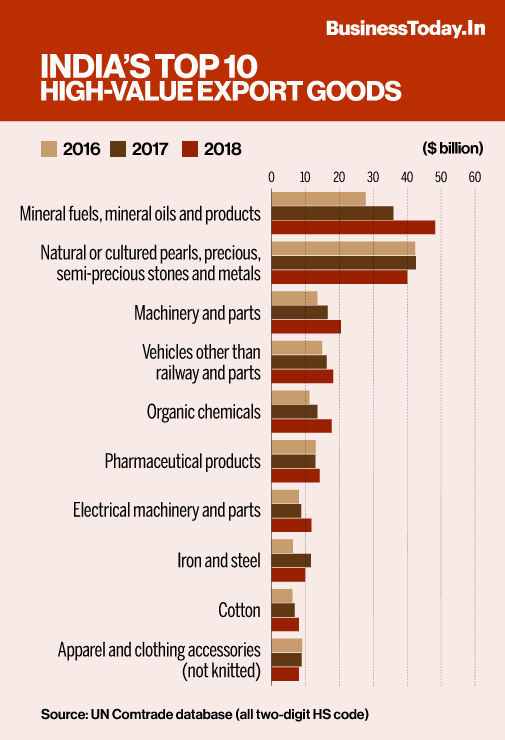 The table below gives India's share in the top 10 high-value globally traded commodities, which is self-explanatory. Prof Nisha Taneja of the Indian Council for Research on International Economic Relations (ICRIER) points to a mismatch between the world export of high-value goods and that of India by saying that almost 70% of India's exports in 2018 were of primary and low technology goods, which constituted only 40% of the world exports. As world exports are now accounted for largely by medium and high technology goods, India is not in tune with the changing demand for exports.

The Chairman of the CII's National Committee on Exim, Sanjay Budhia, says India has a very low share of the world's top import items like electronics and machinery. In 2018, India's exports of electronics and machinery were worth $11.8 billion and $20 billion, respectively, while those of the global exports were worth $2.8 trillion and $2.3 trillion. India's exports of mineral fuels, gems and jewellery and pharma products were reasonable though. However, he says India's export share is not commensurate with its GDP.

A 2018 UNCTAD report said India's trade imbalance was exceptional in the world as its trade deficit was large relative to both its GDP and overall world trade imbalances.

Also Read: Investment is falling; neither central government nor private sector shows any appetite for it

What ails India's export of goods

Prof Taneja says some impediments to exports of manufactured goods have been there for a long time. For instance, poor infrastructure, intermittent and inadequate power supply, high transaction costs, rigid labour markets and inadequate labour skills have continued to plague India's competitiveness. As the world is going through an unprecedented technological change with digitisation at its core, India needs to deal with persisting and new challenges.

Prof Biswajit Nag of the Indian Institute of Foreign Trade (IIFT) says what India needs most is skill, followed by product, process and value-chain up-gradations and improvement in trade-related infrastructure. He says skilling is of greater significance because it can link employment with export. Moreover, since product lifecycles have shortened, experience learning (learning from other's mistakes) needs to be much faster now. He also emphasises the need for policies and incentives to link innovation with trade, trade with global value chain and skill with trade, besides a holistic approach to infrastructure development.

The Niti Aayog's Strategy for New India@75 lists high logistics costs as a major impediment to exports. It says India's logistics costs are estimated at 14% of its GDP while that for other countries, except China, is far lower: 9% for the US, 11% for Japan, 12% for South Korea and 14.9% for China.

It says a 10% decrease in logistics cost has the potential to increase exports by 5-8%.

Areas of focus for the future

Prof Taneja says new technologies have the potential to profoundly transform trade in which India lags far behind. Not only does India need to embrace new technologies to deal with its traditional goods exports, but it also needs to move up the value chain and export medium and high technology goods so that its participation is in line with world exports. India's trade policy would have to be geared to achieve these goals.

A 2019 ICRIER study, Climbing up India's Manufacturing Export Ladder: How Competitive are Intermediate Goods?, says the global trade in intermediate goods (defined as inputs, providing value-added in production which is traded for further processing) is rising, accounting for almost two-thirds of the total, and India's share in export of such goods has risen from 31.18% in 2011 to 32.52% in 2016 in its total exports. It identifies 15 intermediates-market combinations where India is most competitive - chemicals, iron and steel articles, glass products, plastics, and leather intermediate inputs and cotton yarn etc. - Europe is considered as the best destination for India's intermediates.

Going forward, CII's Budhia lists several measures to promote exports of high-value products: market promotion and trade facilitation; higher private sector investment in R&D; a board for monitoring ease of doing business; FDI in key sectors (the Niti Aayog had called for greater encouragement to FDIs supporting buybacks and export orders); greater investments in innovation through fiscal incentives and identification and promotion of selected sectors and products through special policies.

All these do not mean India should ignore exports of primary goods. However, the Niti Aayog's prescription in its Strategies for New India@75 is a classic one in terms of what ails India's export and the government's approach: "In consultation with all stakeholders, the Government of India should come up with a coherent and stable agricultural export policy, ideally with a five to ten-year time horizon and a built-in provision for a mid-term review. Efforts should be made to achieve this urgently." That was in November 2018. Nothing more has been heard of it since.

Aadhaar verification to be mandatory for new dealers from January 2020: GST Network