Delhi Election Results: Aam Aadmi won 62 out of 70 seats, whereas BJP was limited to 8 seats despite its best vote share in past 27 years. Congress could not win even a single seat 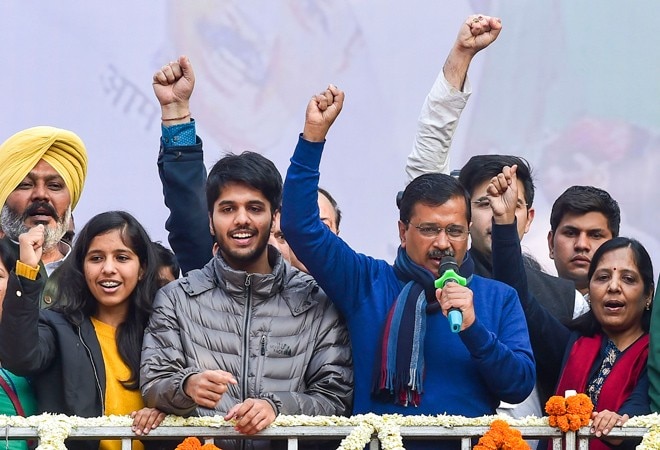 Delhi Election Results 2020: Aam Aadmi Party left the two national parties no choice but to accept their defeat even before the counting of votes for Delhi Assembly elections was halfway done. The Arvind Kejriwal-led party convincingly managed to claim a third stint in power at the national capital by winning 62 out of 70 seats up for grabs in the poll fray. The Bharatiya Janata Party remained a distant second with only 8 seats to its name. Congress could not win a single seat this time either.

Arvind Kejriwal is set for a third term as Chief Minister of Delhi after he won the New Delhi with a comfortable margin. The incumbent Chief Minister maintained a led all the way and emerged victorious with a difference of 21,697 votes.

Kejriwal's deputy, Manish Sisodia did not have an equally easy day, as he trailed for some eight rounds of counting for Patparganj seat, albeit by a small margin. In the end, he managed to push through and pipped Ravinder Singh Negi to win by a margin of 3,207 votes.

It was vindication for AAP's Atishi Marlena, who unsuccessfully contested the last Lok Sabha election from East Delhi parliamentary constituency. The AAP leader managed to widen the lead of seven votes to 11,000 votes to defeat BJP candidate Dharambir Singh for the Kalkaji Assembly constituency.

Raghav Chadha, another high-profile candidate from AAP, won the Rajinder Nagar seat from BJP candidate Sardar RP Singh. AAP fielded Chadha from this seat instead of sitting MLA Vijender Garg Vijay, and he managed to increase the winning margin by seven votes to 20,058 votes.

As expected, the Okhla constituency once again elected Amanatullah Khan as their legislator, who defeated BJP's Braham Singh by a huge margin of 71,827 votes. The Okhla seat was in the limelight during the course of the campaign for Delhi elections as Shaheen Bagh, where incessant protests against the amended citizenship law are going on, falls under this constituency. BJP leaders had vehemently opposed these protests during their election campaign.

Meanwhile, it was the worst ever performance by Congress in the national capital, as it could not manage even a single seat for the second time in a row and its vote share slipped to its lowest level of 4.27 per cent. On top of that, Congress' 63 candidates lost their security deposits this time. The party had fielded candidates on all 70 seats.

Congress was the first to concede defeat, as party spokesperson Randeep Singh Surjewala held a press conference to congratulate AAP and Arvind Kejriwal. "The people of Delhi have given its verdict. The verdict is against the Congress party. AICC and Delhi Pradesh Congress Committee accept the verdict. The result has further strengthened our pledge to make the party strong again," he said.

Sometime later, BJP's national head JP Nadda tweeted that his party accepts the public mandate and is willing to be the opposition in Delhi Assembly.

"The BJP respects the mandate given by the people of Delhi. Accepting this mandate, the BJP will play the role of constructive opposition and will prominently raise every issue related to the development of the state," Nadda said on Twitter.

Notably, in terms of vote share, this was the best performance BJP had put up in Delhi in the past 27 years. The party secured 38.5 per cent votes during the polls held on February 8.