Harsimrat Kaur Badal who recently resigned from the government tweeted, 'Indeed a DARK DAY for democracy as President Kovind too refused to heed the request of 18 political parties pleading him not to sign the undemocratically passed anti-farmer bills' 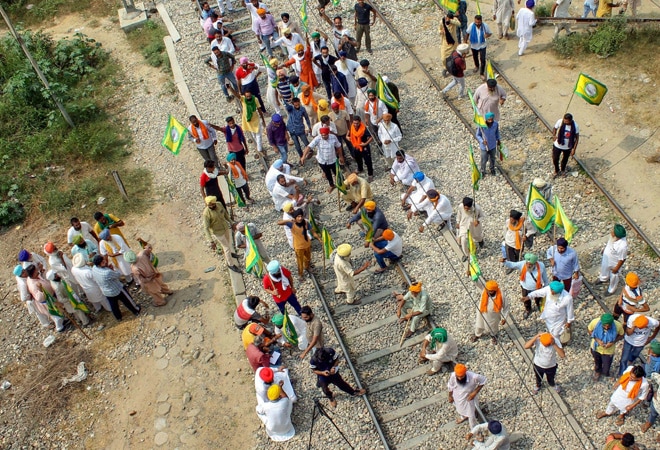 On Sunday evening, President Ram Nath Kovind gave assent to three farm bills amid protests by farmers across India. The three farm bills that have now become an act includes The Farmers' Produce Trade and Commerce (Promotion and Facilitation) Bill, 2020, The Farmers (Empowerment and Protection) Agreement of Price Assurance and Farm Services Bill, 2020 and The Essential Commodities (Amendment) Bill 2020.

Here's what the farm bills entail:

The Shiromani Akali Dal (SAD), which was an ally of BJP-NDA termed the presidential assent "dark day of the country".

Harsimrat Kaur Badal who recently resigned from the government over the aforementioned bills tweeted, "Indeed a DARK DAY for democracy as President Kovind too refused to heed the request of 18 political parties pleading him not to sign the undemocratically passed anti-farmer bills".

Indeed a DARK DAY for democracy as the @rashtrapatibhvn too refused to heed the request of 18 political parties pleading him not to sign the undemocratically passed anti-farmer bills. Bills got assent & the Annadata of the nation esp Punjab & Haryana has been let down yet again. pic.twitter.com/LCmSsrJwDK

Sukhbir Singh Badal had earlier requested President Ram Nath Kovind not to give his assent to the farm bills, saying that the farmers will otherwise not "forgive them".

Terming the President's assent to the farm bills as "unfortunate and distressing", Punjab Chief Minister Amarinder Singh on Sunday said his government is exploring all options, including possible amendments to the state laws, to protect farmers' interests.

All farmer organisations and other stakeholders will be taken into confidence before taking any decision on the way forward, the chief minister said, adding that his government was committed to the procurement of every single grain of farmers without compromising on the pricing.

Implementation of these dangerous new laws in their current form would destroy Punjab's agriculture the lifeline of its economy, said Amarinder, adding that the very livelihood of farmers was at stake due to the legislations.

Punjab, which will be the worst affected by these laws, will take this fight forward with all its might, said Amarinder, vowing not to give up till the farmers get back their due rights.

WHAT HAPPENED SO FAR

On September 17, the Lok Sabha, through voice vote passed the controversial legislation. Thereafter, on September 20, the Rajya Sabha also cleared the two contentious bills. Eight opposition members, including TMC leader Derek O'Brien and Sanjay Singh of AAP, were suspended from Rajya Sabha for the rest of the Monsoon Session of Parliament for "unruly behaviour" during the passage of two farm bills in the upper house. The third bill was passed in the Upper House on September 22.

Subsequently, farmers' organisations along with several opposition parties started countrywide protests to request the president not to give his assent to the bills.

Farmers squatted on the Amritsar-Delhi railway track for 'rail-roko' agitation against the contentious farm bills. Farmers, under the banner of the Kisan Mazdoor Sangharsh Committee, have been staging a sit-in on the rail track in Punjab since last Wednesday.

Haryana unit of the Congress on Saturday announced an over month-long protest programme against the legislations. farmers' agitation was also seen in Palgharh, Thane, Delhi, Karnataka, Tamil Nadu, Kerala, other parts of the country.

In fact, on Saturday, Shiromani Akali Dal snapped ties with the BJP over the bills.

WHAT THE GOVERNMENT SAYS

According to the government, the farm bills will make farmers self-reliant. It will help the small farmers who don't have the means to bargain for their produce to get a better price. The bill on the Agri market seeks to allow farmers to sell their produce outside APMC 'mandis' to whoever they want.

The legislation on contract farming will allow farmers to enter into a contract with agri-business firms or large retailers on pre-agreed prices of their produce. The Essential Commodities (Amendment) Bill, 2020, seeks to remove commodities like cereals, pulses, oilseeds, edible oils, onion and potatoes from the list of essential commodities.

WHY FARMERS ARE PROTESTING

According to farmers, mandis play a crucial role in ensuring timely payments to them. Removing these markets, or allowing corporates direct access, without offering an alternative, such as regulated direct-purchase centres, does not make sense.

Farmers are worried MSP (a price guaranteed by the government) will be removed. According to farmers' organisations, small and marginal farmers might get vulnerable to disadvantageous contracts unless the sale prices continue to be regulated. Although the Centre has assured the MSPs will not be removed, farmers are concerned allowing prices to be settled outside regulated mandis will make it difficult for the government to monitor each transaction individually.

In addition to farmers' concerns, state governments - particularly those in Punjab and Haryana - fear that if private buyers start purchasing directly from farmers, they will lose out on taxes that are charged at mandis. The potential scrapping of mandis would also endanger the jobs of millions who work there.