India has slipped to the 7th position in the global GDP rankings in 2018, marginally behind the UK and France, according to World Bank data. As per earlier data, India ($2.597 trillion) was on the 6th position in 2017, ahead of just France ($2.582 trillion). But, latest data suggests India was in fact the fifth-largest economy ahead of even the UK . India was at $2.65 trillion, while the UK's GDP was at $2.64 trillion, followed by France at $2.5 trillion in 2017. 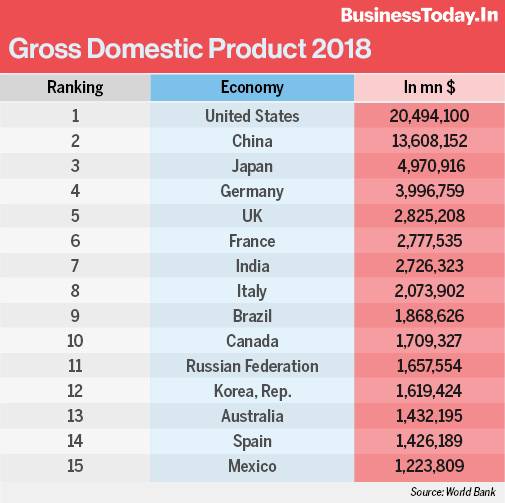 Experts have cited the movement of the Indian rupee against the dollar as the reason for India slipping behind the two European countries.

According to Devendra Pant, chief economist at India Ratings, the rupee appreciated 3 per cent in 2017, while it depreciated 5 per cent in 2018 . "This has resulted in slower growth of India's economy in dollar terms in 2018 against 2017," the Business Standard quoted him as saying.

In its first Budget after returning to power, the Modi government has laid out its plan to make India a $5 trillion economy by 2025. The Economy Survey for 2018-19 had prescribed that the Indian economy needs to grow at a rate of 8 per cent to reach this goal.