The second and concluding part looks at how the quarterly GDP estimates use the organised sector indicators to measure the unorganised sector, which contributes nearly 50% to the GDP, thereby giving a misleading picture of the state of economic health 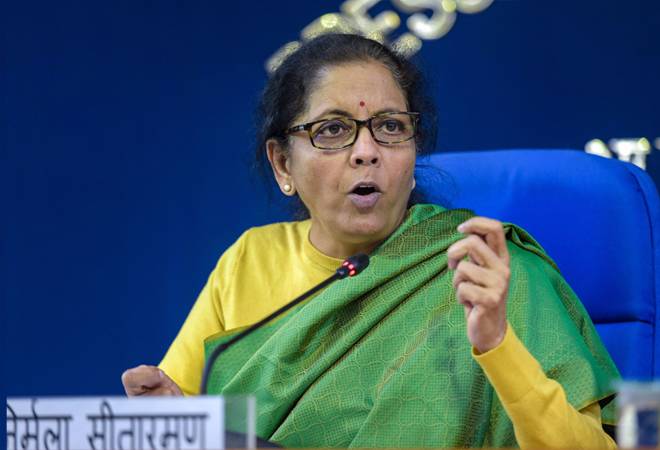 Finance Minister Nirmala Sitharaman recently asserted in the Parliament that the Indian economy is not in recession yet, but the debate over the subject continues. This is primarily because the National Statistical Office (NSO) uses the organised sector data to measure growth in the unorganised sector also, which contributes substantially to the GDP, and assumes that both the sectors are growing at the same rate.

For a quick recall, the latest NSO data shows quarterly GDP growth falling for the sixth consecutive quarter - from a high of 8.1% in Q4 of FY18 to 4.5% in the last quarter (Q2 of FY20). 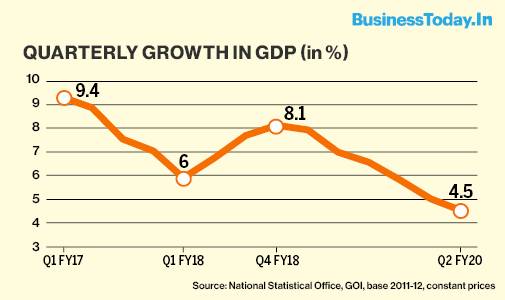 How the quarterly GDP is estimated

The NSO's statement announcing the GDP growth rate for Q2 of FY20 (and indeed all such quarterly statements released earlier), reveals its source of data for estimating the quarterly GDP.

While the agriculture sector data is collected from states for the quarterly estimates, for the non-agriculture sectors like industry and services, it uses the following data: (a) IIP Manufacturing data for the quasi-corporate and unorganised segment of manufacturing (b) corporate sector and banking data for financial, real estate and professional services (c) GST and sales tax for trade, hotel, transport, communication and broadcasting (d) IIP Electricity for electricity, gas, water supply and other utility services (e) production of cement and consumption of finished steel for construction etc.

But this could present a misleading picture if both are not growing at the same rate and the error would depend on the size and share of the unorganised sector in the GDP.

How big is the share of unorganised sector in GDP?

There is no official word on what the NSC does while estimating quarterly GDP. Way back in 2012, the NSC's Report of the Committee on Unorganised Sector Statistics of 2012 said this about the unorganised sector: More than 90% of workforce and about 50% of the national product (GDP) are accounted for by the informal economy.

Another indication of it could be what the Economic Survey of 2018-19, released on July 4, 2019, says about the workforce. It says "almost 93%" of the total workforce is "the informal workforce".

Sen says during the 2011-12 re-basing of the GDP series, the contribution of the unorganised sector was taken to be 47%.

Thus, it can be safely assumed that the unorganised sector contributes nearly 50% to the GDP.

This would mean that the quarterly GDP estimate could be off the mark by a big margin if both the sectors are not growing at the same rate.

Are the organised and unorganised sectors growing at the same rate?

There are no official data yet to show what has been the impact of demonetisation or GST on the unorganised sector but there is no disputing now that on these events did impact the economy adversely.

He provides a back-of-the-envelope calculation to show the impact of different rates of growth for the organised and unorganised on the GDP estimates.

He says, of the 47% contribution of the unorganised sector to the GDP (as assumed during the finalisation of the 2011-12 GDP series), agriculture accounted for 17%, trade for 9% and the rest 21% by the manufacturing and services sectors. While the government collects agriculture related data from states and the trade data is available through GST, it is the rest 21% (unorganised manufacturing and services) which go unrepresented by actual data.

"This 21% is not really measured while estimating quarterly GDP", he asserts, adding, "We have no idea about what happened to 21% of the GDP" post-demonetisation and GST. Moreover, the quarterly GDP estimates are "even worse" since full data is not available even for the organised sector on a quarterly basis.

He says transporters, traders, manufacturing associations etc. have been claiming a fall of 15% in business due to "three economic shocks" in quick succession - demonetisation, GST and the crisis in the non-banking financial companies (NBFCs). (News reports suggest a muted business even during the last festive season (Dussehra and Diwali) for consumer durables and retail - 15-20% business surge in sale against 27% last year - and 8-9% growth in ad spends, against 13-14%)

Prof Kumar also assumes that the unorganised sector trade is not captured by the GST collection, or would be too insignificant because: (a) those below aggregate turnover of Rs 40 lakh are exempt (b) for those with turnover of Rs 40 lakh to Rs 1.5 crore pay 1% tax under the composition scheme and (c) and as former Finance Minister Arun Jaitley had said, 95% of tax comes from only 4 lakh assesses, which is about 3%.

Mohanan, who worked as the NSC chairman until early this year, says: "My take is that the quarterly GDPs are not based on actual data except in very few cases. These are mostly based on indicators for the organised sector which are used for the unorganised sector applying the same growth rate. One good example of this clear mismatch is how the quarterly GDP went up after the demonetisation when everybody knew the economy was not doing so well. So, the quality of the quarterly GDP has its own limitations."

If the quarterly GDP numbers are misleading, so could be the other economic indicators linked to it that are used for assessing recession - per capita GDP (output or product), per capita gross and net national income (GNI and NNI), private consumption (PFCE) and capital formation (GFCF).

The 2017-18 Periodic Labour Force Survey (PLFS) - which was held up for six months in spite of Mohanan's resignation earlier this year - showed that not only the unemployment rate had hit 45-year high at 6.1%, but a far bigger crisis was brewing in the economy.

Analysing the PLFS 2017-18 report, a study by the Azim Premiji University said in November this year that for the first time in India's history 9 million jobs were lost between 2011-12 (previous survey) and 2017-18.

It should be kept in mind that in 2017-18, India grew at an annual rate of 7.2%. Now that the growth rate has fallen to 4.5%, the unemployment situation could be far worse, and so the financial health of a large population, especially in rural areas.

Poverty is spreading for the first time

The NSO's Consumer Expenditure Survey (CES) of 2017-18 was junked by the government recently by raising questions about its data quality - after a leaked report painted a very grim picture. The leaked report showed that the "real" (inflation adjusted) household consumer expenditure had fallen in for the first time over 40 years in India by 3.7% - from Rs 1,501 in 2011-12 to Rs 1,446 in 2017-18.

Again, India was growing at 7.2% annually that year. Surely, the situation would be far worse at a 4.5% growth rate. In fact, that is the point Prof Kumar makes to strengthen his argument that India could very well be in a recession now.

That may not be the case and in absence of official data, a debate over recession could be a futile exercise but it would be self-defeating to ignore the warning signs and the gross limitations in the quarterly GDP estimations to reflect the real state of the economy.