Bihar Elections 2020: Yadav said that there is a difference between earning and employment. He said that they were talking about government jobs 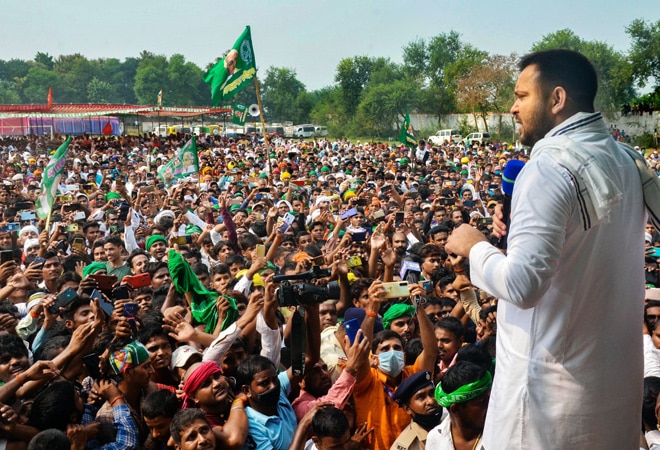 As the war of words continue between Rashtriya Janata Dal and Bharatiya Janata Party ahead of the Bihar Assembly Elections 2020, RJD leader Tejashwi Yadav has taken a dig at the latter. The chief ministerial candidate released the RJD manifesto and said that he could promise 1 crore jobs just for the sake of it but he will not. "I am promising 10 lakh jobs. I could have also promised one crore jobs just for the sake of promise. But I am not doing that because this will become a reality in the first meeting of the Cabinet.This will be the first time in the country that 10 lakh employment opportunities will be created at one go. This figure is what we require in the state's workforce at present," he said.

Yadav said that there is a difference between earning and employment. He said that they were talking about government jobs. He elaborated that there are employment opportunities for teachers, professions, doctors, nurses, lab technicians and engineers. "We need more police for the law and order of the state. Manipur is a smaller state but it has more police per lakh population than Bihar," he said.

"The Bihar government can easily provide 4 lakh jobs... The state has a budget of Rs 2.13 lakh crore of which only 60 per cent has been spent. Nitish Kumar has not been able to spend the remaining 40 per cent, which is Rs 80,000 crore," the leader of Opposition said.

The RJD leader questioned BJP's poll promise of 19 lakh jobs. "Was Nitish Kumar able to provide jobs? He already surrendered and said he couldn't give more jobs. Then how will BJP offer 19 lakh jobs? Who are they fooling?" he said.

Nitish Kumar and the BJP ridiculed Yadav's 10 lakh government job promise. They asked if he would get the money from jail -- referring to RJD chief and Yadav's father Lalu Prasad Yadav who has been put behind bars.

Bihar Assembly Elections would be held in three phases -- October 28, November 3 and November 7, and counting will be on November 10.