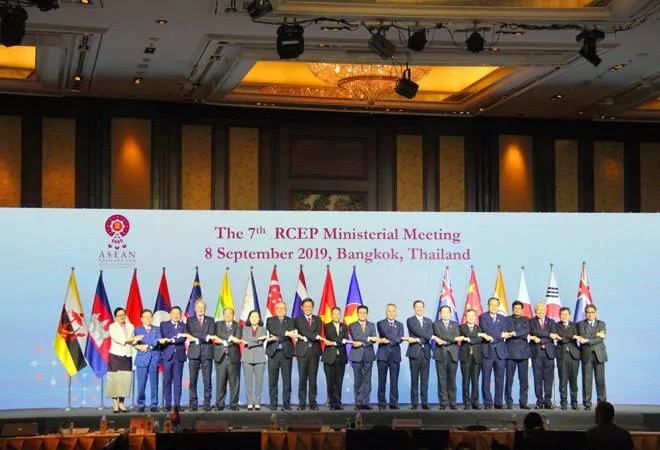 As the negotiations of Regional Comprehensive Economic Partnership (RCEP) near closure, lobby groups in India have upped their ante to push the government for a no-RCEP case. It is expected that PM Narendra Modi will take the final call on the agreement after poll campaigns end in Haryana and Maharashtra, this weekend. It will be a difficult balance between demands of the domestic industry, the deeply divided Cabinet and party, the opposing RSS and those who see strategic benefits along with future integration into global value chain manufacturing.

India's dairy, steel, textile, MSME and e-commerce companies, along with advocacy groups pushing for data sovereignty and tighter e-commerce regime, want the government to reject the RCEP drafts. Leading the pack of opponents is RSS affiliate, Swadeshi Jagran Manch. The opposition has made the negotiators' job even more complex. It won't be easy for the PM either.

The ASEAN and their six Free Trade Agreement (FTA) partners in the Asia Pacific region are negotiating this major multilateral trade agreement.

There are 14 pending issues, of which five demands are from Indian negotiators. This includes, changing the base year to apply the reduction of tariffs (from 2013 to 2019), provision of auto trigger safeguard mechanism, and right to determine differential tariffs (for specific products) along with future domestic policy concessions in investment and services sectors.

India is also non-committal on the provisions of data sovereignty and concessions on e-commerce. There is a strong lobby that wants the country's dairy and agriculture sectors to be kept out. In the past, India kept these sensitive sectors out of the other FTAs, but with RCEP, the players from Australia and New Zealand are eyeing the Indian market. In fact, earlier, the FTA negotiations with the EU, Canada, the US failed because they sought access to India's dairy and farming sector, which India denied.

The industry, too, is worried about RCEP. In an interaction with the Press during the Forum for Trade Justice, Biswajit Dhar, who teaches Economics at the Jawaharlal Nehru University, said, "Major manufacturing sectors are facing serious headwinds, essentially due to sagging domestic demand. Acceding to RCEP at this juncture will accentuate the uncertainties for these sectors, and could result in loss of jobs and incomes, which the country can ill-afford."

The key point for India in RCEP has been trade with China, for which even an informal bilateral summit was held between the Chinese Premier Xi Jinping and PM Modi. Both the countries have agreed to set up a new trade mechanism to discuss ways to cut trade deficit of $53 billion. The negotiators want India to bring the tariff to zero for more than 90 per cent of the products traded in the region. India's worry is that 40 per cent of the traded goods are already what Chinese companies 'dump' in India. Moreover, Indian exporters find it difficult to get clearance from Chinese trade regulators for their products.

The challenge with China is not only tariff but also their complex non-tariff barriers. Ranja Sengupta of the Third World Network, says, "Tariff differential with China will be meaningless as China can use the rules of origin (ROO), which allow any product with some value creation in the RCEP region to enter Indian markets duty-free. China has already been circumventing ROO and will now find an easier route even for products not opened up to China under RCEP."

There are also concerns related to investments. Referring to a leaked document on investment from the latest round of negotiations at Bangkok, trade expert Kavaljit Singh of Madhyam, says, "This RCEP draft investment text contains many controversial provisions, which are TRIMS-plus (Trade Related Investment Measures) and TPP-plus (Trans-Pacific Partnership), and they go far beyond the scope of India's Model Bilateral Investment Treaty  text (2015) and the recently concluded bilateral investment agreements with Brazil and Cambodia. Rather than moving forward, India is moving backwards on its policy over investment agreements."

Others at the Forum for Trade Justice conference, included Parminder Jeet Singh of IT for Change, who cautioned that "accepting free global data flows as per RCEP demands is (equal) to giving up all data policy space, and data sovereignty. And with it, any chance that India could really employ its data for India's development, and be a top digital country, is gone. We will become digitally completely dependent on one of the two digital super powers. No clever language around public policy exceptions in the RCEP text will mitigate this disastrous eventuality. Such public policy exemptions have never worked effectively, especially for developing counties."

Expressing concern on the process, Shalini Bhutani, legal researcher and policy analyst, says, "Negotiating for a trade deficit with a democratic deficit spells disaster on both fronts. The irony is that the draft chapter of RCEP on General Provisions and Exceptions makes it a legal obligation on member countries to publish in advance any such laws, regulations, procedures and administrative rulings of general application with respect to any matter covered by this Agreement that it proposes to adopt so that interested parties have reasonable opportunity to comment on the same. What is worrying is that the talks have gone so far in such detail sans any meaningful involvement with people, who are the real stakeholders and will face real consequences."

The agricultural sector becomes all the more vulnerable if RCEP opens the gates to imports. About 15 million Indian dairy farmers, many of who are women, are the backbone of the largest dairy economy of the world, which is worth Rs7 lakh crore per annum, and forms almost 25 per cent of India's total farm produce (worth Rs 28 lakh crore). Further, in Indian dairy cooperatives, farmers have some control over production, processing as well as marketing.