Republic Day tractor rally violence: The police said that the Samyukt Kisan Morcha had conducted several rounds of meetings with the Delhi Police where they had given undertakings that the tractor rally would be a peaceful one 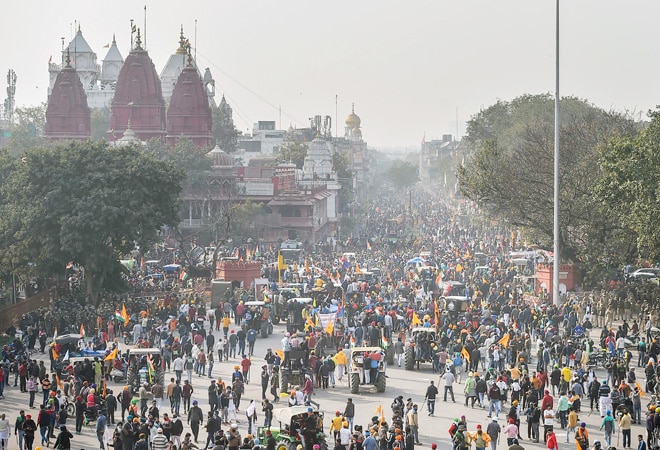 Following the violent clashes between the police and the farmers in Delhi on Republic Day, the Delhi Police have filed 22 cases. The police also said that over 300 policemen were injured during the clashes that were the culmination of two months of protests against the newly introduced farm laws. The Delhi Police also said that eight buses and 17 private vehicles were vandalised during the violence.

The police said that the Samyukt Kisan Morcha had conducted several rounds of meetings with the Delhi Police where they had given undertakings that the tractor rally would be a peaceful one. Nevertheless, violence started as early as 8 am, way before the designated time from the agreed routes.

As many as 6,000-7,000 tractors assembled at the Singhu border around 8:30 am and farmers said that they wanted to go to Central Delhi, as per the police. The police statement said that despite persuasion by the Delhi Police, farmers led by Nihangs on horses and equipped with swords, kripans and fursas charged at the police and broke several layers of barricades between Mukarba Chowk and Transport Nagar.

A large number of farmers who came from Ghazipur and Singhu borders attempted to move towards New Delhi district from ITO, the police said. Once they were stopped by the police, violence broke out. The police said that the farmers became violent and broke barricades and damaged grilles and dividers as well as tried to run over policemen. The statement said that the situation was controlled after the reinforcements arrived.

The farmers moved towards Red Fort where they climbed the ramparts and hoisted a religious flag on a mast. Eventually the police managed to clear the fort.

The farmers' group eventually called off the tractor rally.

The police said that they were registering cases of violation of lawful directions, rioting, damage to public property and assault on public servants.

The Samyukt Kisan Morcha said that anti-social elements infiltrated their peaceful movement. "Despite all our efforts, some organisations and individuals have violated the route and indulged in condemnable acts. Anti-social elements had infiltrated the otherwise peaceful movement. We have always held that peace is our biggest strength, and that any violation would hurt the movement. The long struggle for more than 6 months now, and more than 60 days of protest at Delhi borders also seemed to have led to this situation. We dissociate ourselves from all such elements that have violated our discipline," it said in a statement.