Why Trump's favourite Harley-Davidson plans to shift production out of the US?

Trump, who has repeatedly raked up the issue of India imposing high import duty on the iconic Harley-Davidson motorcycles - which, in fact, is partly responsible for the current trade tension between the two countries - claimed he was "surprised" by the move. 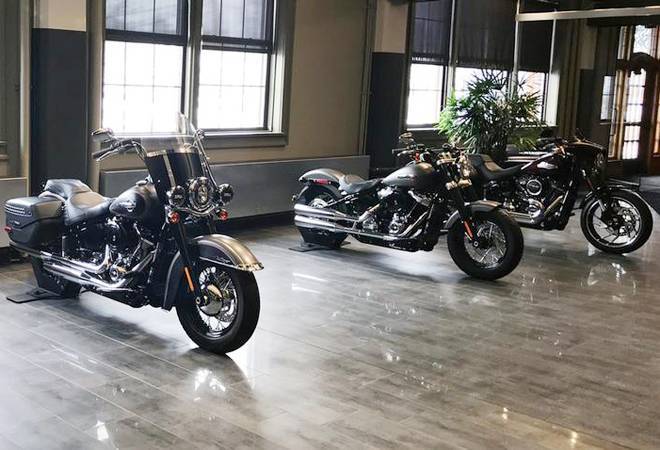 Caught in the middle of US President Donald Trump's trade skirmishes with the European Union (EU), the iconic Harley-Davidson motorcycles are expecting to take a hard hit. The US-based motorcycle manufacturer expects the trading bloc's recent retaliatory tariffs to add up to $100 million a year in costs, so yesterday it announced that it will shift some of its production overseas.

Trump, who has repeatedly raked up the issue of India imposing high import duty on the iconic Harley-Davidson motorcycles - which, in fact, is partly responsible for the current trade tension between the two countries - claimed he was "surprised" by the move. "Surprised that Harley-Davidson, of all companies, would be the first to wave the White Flag. I fought hard for them and ultimately they will not pay tariffs selling into the E.U., which has hurt us badly on trade, down $151 Billion. Taxes just a Harley excuse - be patient!" he tweeted yesterday.

But perhaps Harley-Davidson can't afford to be "patient". In its US Securities and Exchange Commission (SEC) filing on Monday the company said that the new retaliatory tariffs by the EU will result in an incremental cost of around $2,200 on an average motorcycle exported from the US. The trading bloc hiked tariffs from 6 per cent to 31 per cent last week in response to US tariffs on steel and aluminium imports from the EU.

Harley-Davidson added that the tremendous cost increase, if passed onto its dealers and retail customers, would have an immediate and lasting detrimental impact to its business in the region, reducing customer access to its bikes and negatively impacting the sustainability of its dealers' businesses. "Therefore, Harley-Davidson will not raise its manufacturer's suggested retail prices or wholesale prices to its dealers to cover the costs of the retaliatory tariffs," the company said in its filing. "To address the substantial cost of this tariff burden long-term, Harley-Davidson will be implementing a plan to shift production of motorcycles for EU destinations from the US to its international facilities to avoid the tariff burden," it added, without specifying which country it plans to move its production facilities to.

This is not the first time that the company is retrenching operations on home ground. According to Bloomberg, after Trump pulled the US out of the Trans-Pacific Partnership, the free-trade agreement with a bloc of Asian countries, Harley-Davidson had announced plans to close a factory in Missouri and build one in Thailand, which is expected to turn operational this year. It already boasts manufacturing facilities in India, Brazil and Australia.

In its SEC filing Harley-Davidson, however, made clear that the company maintains a strong commitment to US-based manufacturing. "Increasing international production to alleviate the EU tariff burden is not the company's preference, but represents the only sustainable option to make its motorcycles accessible to customers in the EU and maintain a viable business in Europe," it argued, adding that, "Europe is a critical market for Harley-Davidson. In 2017, nearly 40,000 riders bought new Harley-Davidson motorcycles in Europe, and the revenue generated from the EU countries is second only to the US." According to the company, shifting targeted production from the US to international facilities could take at least nine to 18 months to be fully completed.

Harley-Davidson is not the only company impacted by the ongoing trade situation. According to the news agency, other iconic American companies, including Levi Strauss & Co., and even Germany's Daimler AG is getting caught in the middle of Trump's trade skirmishes with major trading partners. Daimler, the maker of Mercedes-Benz luxury vehicles, reportedly warned last week that the US-China trade tensions will impair earnings from its Alabama sport utility vehicle plant and lower profit this year.

But the White House maintains that Trump's trade policies have been a success. "The president's trade and economic policies have been a huge benefit to the American economy, and this includes the creation of over 300,000 manufacturing jobs. Unemployment is at 3.8 per cent, the lowest since 2000. And manufacturing confidence is at historic highs," White House Press Secretary Sarah Sanders told reporters recently, adding, "The EU is trying to punish US workers because they have engaged repeatedly in unfair trade practices. And the president is saying enough is enough. We'd like to work with the EU to work on a level playing field."

Harley-Davidson has further announced that it will "provide more details of the financial implications and plans to mitigate the impact of retaliatory EU tariffs during the company's second quarter earnings conference call" on July 24. "Harley-Davidson's purpose is to fulfill dreams of personal freedom for customers who live in the European Union and across the world, and the company remains fully engaged with government officials in both the U.S. and the EU helping to find sustainable solutions to trade issues and rescind all tariffs that restrict free and fair trade," it added.