Addressing the Shanghai Cooperation Organisation (SCO) Summit here, Modi said that unilateralism and protectionism has not benefitted anyone. 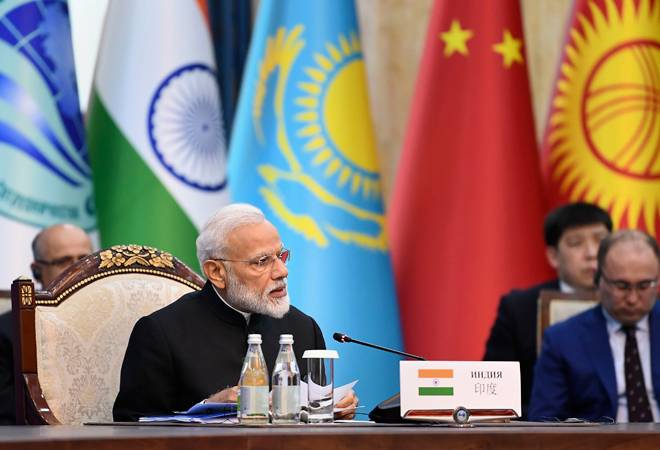 India is committed to make favourable environment for the economic cooperation between the SCO member countries, PM Modi said in his address at the SCO Summit. Photo credit: PTI

Prime Minister Narendra Modi on Friday hit out at unilateralism and trade protectionism, and said that there is a need for a rules-based, anti-discriminatory and all inclusive WTO-centred multilateral trading system, amidst the raging trade war between the US and China.

Addressing the Shanghai Cooperation Organisation (SCO) Summit here, Modi said that unilateralism and protectionism has not benefitted anyone.

"Economic cooperation is the basis of our people's future.

"We need a rule-based, transparent, anti-discriminatory, open and all inclusive WTO-centred multilateral trading system focused so that the interests of every countries specially the developing ones can be taken care of," he said.

India is committed to make favourable environment for the economic cooperation between the SCO member countries, the Prime Minister said in the presence of Chinese President Xi Jinping.

Prime Minister Modi Thursday said he had an "extremely fruitful" meeting with Xi during which they discussed the full spectrum of bilateral relations and vowed to work together to improve the economic and cultural ties.

The meeting on the sidelines of the SCO Summit here is their first interaction after Modi's re-election following the stunning victory of the BJP in the general elections last month.

Xi said India and China should uphold free trade, and multilateralism, without directly referring to Beijing's opposition to US President Donald Trump's protectionist policies and the ongoing China-US trade war.

China and the US have been in an escalating conflict over trade for the past year. The scope of the battle has expanded in recent months as Washington has tightened trade restrictions on Chinese telecom giant Huawei.

The SCO member states, including India, said that the situation in global politics and economy remains turbulent and tense, and the process of economic globalisation is being hindered by the growing unilateral protectionist policies and other challenges in international trade, according to the Bishkek Declaration of the Shanghai Cooperation Organisation's Heads of State Council.

They stress on the importance of further improving the architecture of global economic governance, and deepening cooperation to build a transparent, predictable and stable environment for the development of trade, economic and investment cooperation through the consistent strengthening of the multilateral trading system based on the rules and regulations of the WTO, and through opposition to the fragmentation of global trade and trade protectionism in all its forms, it said.

They believe that unilateral protectionist actions in violation of the World Trade Organisation (WTO) rules and regulations undermine the multilateral trade system and threaten the world economy and trade, it said.

The member states stressed on the importance of further deepening cooperation in order to bring forth an open world economy, consistently strengthen an open, inclusive, transparent, non-discriminatory and rule-based multilateral trading system, maintain the authority and effectiveness of WTO rules, and to prevent any unilateral protectionist actions in international and regional trade.