UEFA meet in Amsterdam amidst coronavirus fears ahead of Euro 2020

Coronavirus impact: The virus has already played havoc with domestic fixtures in Italy where Sunday's clash between Juventus and Inter Milan was one of six games postponed this weekend 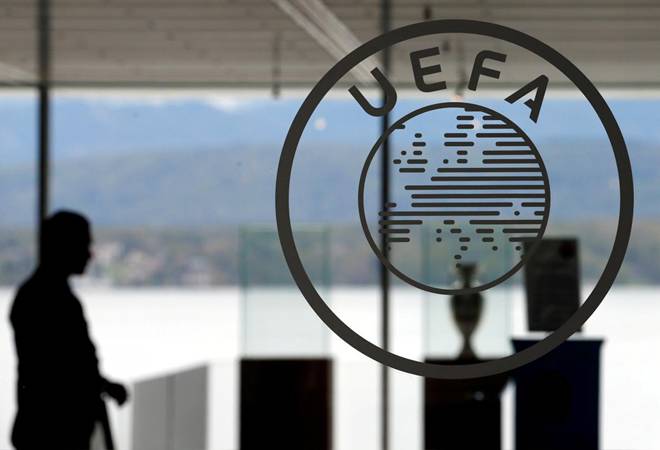 European football's governing body UEFA gathers in Amsterdam on Monday for their annual congress as they face up to the possible impact of the coronavirus on the Euro 2020 championship and this month's playoffs. Soccer Football - Europa League - Round of 16 draw - Nyon, Switzerland - February 28, 2020 General view of the UEFA logo at UEFA Headquarters before the draw.

The virus has already played havoc with domestic fixtures in Italy where Sunday's clash between Juventus and Inter Milan was one of six games postponed this weekend.

National teams from across the continent are scheduled to play later this month including the crucial playoffs to qualify for Euro 2020, which is scheduled to be held in 12 cities across the continent. "Sure there will be discussions, you'd expect that," Mark Bullingham, chief executive of England's Football Association, said when asked about the UEFA meetings, which include a full congress of all 55 European associations on Tuesday.

"But fundamentally we have to go on the advice that the government give us and we have to rely on that." The playoffs on March 26 and March 31 feature 16 teams battling for four spaces in the 24-team finals. Northern Ireland are one of those teams and will travel to Bosnia Herzegovina for their knockout game.

Irish FA chief Patrick Nelson said: "We're keeping in close contact with UEFA. I know UEFA and ourselves are in direct contact with the World Health Organisation and we will take whatever advice we receive." UEFA has said there is no reason to make changes to the month-long tournament, which will start in Rome on June 12, but says it is closely watching developments with the virus.

"UEFA is in touch with the relevant international and local authorities regarding the coronavirus and its development. "For the moment, there is no need to change anything in the planned timetable. The issue will be kept under constant scrutiny," the organisation said.

As well as the playoff games, the international break features friendly matches all across the world. Two rounds of World Cup qualifiers are also scheduled for the same period in Asia and South America. Asked if he would consider cancelling some of those games, FIFA president Gianni Infantino said on Friday that nothing was out of the question.

Kazakhstan to bar Iranians from entry over fears of coronavirus