More than 230 Americans had lost their lives by Friday evening due to the coronavirus and the number of confirmed cases jumped to over 18,000 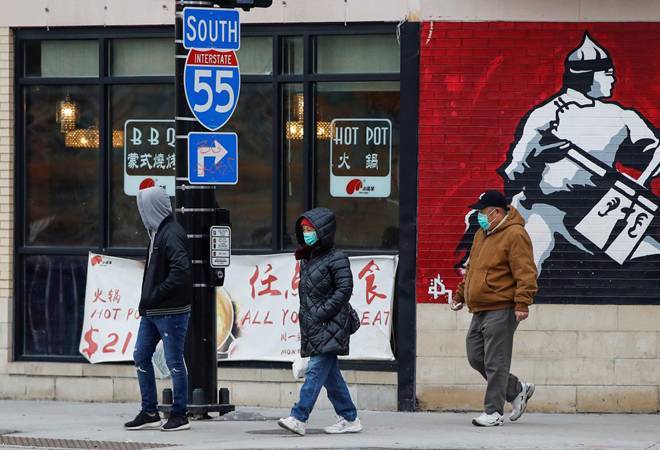 Washington State has the largest number of 74 fatalities so far, with confirmed cases being over 1400

Responding to the growing coronavirus crisis, the United States on Friday strengthened its emergency and relief measures to combat the toughest public health challenge in decades.

More than 230 Americans had lost their lives by Friday evening due to the coronavirus and the number of confirmed cases jumped to over 18,000, an increase of over 10,000 in less than 50 hours.

The Trump administration has declared a national emergency and pressed into service its armed forces, albeit in a limited way, to combat the coronavirus, which is now spreading like a wildfire from coast to coast.

New York, Washington and California are the three worst hit states by the deadly virus. The Washington State has the largest number of 74 fatalities so far, with confirmed cases being over 1400. New York State had reported the maximum number of over 7,010 confirmed coronavirus cases with 39 deaths.

California, which has a little over 1,000 confirmed cases and 21 deaths, has ordered for an in-home stay for all its nearly 40 million citizens. New York has also ordered its residents to stay home as much as possible. Describing it as a "New York State on Pause" plan, Governor Andrew Cuomo announced sweeping increase in restrictions on the movement in the State.

"This is the most drastic actions we can take," he told reporters, adding that his executive order will mandate 100 per cent of the workforce must stay home, excluding essential services.

President Donald Trump told reporters Friday that he would start using his powers under a Korean War-era law to increase the production of ventilators and masks. "I invoked the Defense Production Act, and last night we put it into gear," he said.

"We are providing historic support to small businesses and to the States...We enacted legislation guaranteeing paid sick leave for workers at no cost to employers, so they get paid sick leave at no cost to employers. We are considering the use of new drug treatments. We are advancing legislation to give direct payments to hard-working families," he said.

Trump said, "Throughout our country Americans from all walks of life are rallying together to defeat the unseen enemy striking our nation. America's border with Mexico and Canada would be closed starting March 21 for all non-essential travel. The Treasury Department announced to move Tax Day from April 15 to July 15.

Trump said he has also temporarily waived all interest on federally held student loans. Schools and colleges across the country have been closed. "With many schools closed due to the virus, the Department of Education will not enforce standardised testing requirements, very importantly for students in elementary through high school for the current year," Trump said. He said doctors and nurses are working nonstop to heal the sick.

Citizens and churches are delivering meals to the needy and truckers are making the long haul to keep shelves stocked, Trump said. "We've been dealing with the big stores in the big chains, Walmart, they've been fantastic, and others. We have made it much easier for them to stock in terms of travel and travel restrictions. We are lifting restriction so they can get their trucks on time," he said.

During the news conference, Trump rued that his administration, inherited an "obsolete, broken, old system that wasn't meant for this". "We discarded that system and we now have a new system that can do millions of people as you need them," he said.

"But we had to get rid of a broken, old system that didn't work. It worked only on a very limited basis. And we're very proud of what we've done. It's incredible what we've done. And this system will now serve them for the future for future problems," he added.

Also read: Coronavirus in India: Economic task force yet to be formed; no decision on relief package

Also read: 'Janata curfew' to $1,000 in every bank account: How countries are fighting COVID-19

Janta curfew: IndiGo to operate only 60% domestic flights on Sunday