News
LATEST
Economy Politics
Govt allows private players to participate in all sectors, but 51% CPSEs are in services

Govt allows private players to participate in all sectors, but 51% CPSEs are in services

There were 17 CPSEs under the chemicals and pharmaceuticals industry and around 13 CPSEs each belonged to industrial & consumer goods, power generation and power transmission

Unveiling the fifth and last tranche of the economic package, Finance Minister Nirmala Sitharaman announced a major public sector enterprise (PSE) policy for "a new, self-reliant India", under which private players will be allowed entry in strategic sectors. "List of strategic sectors requiring the presence of PSEs in the public interest will be notified," she said.

In strategic sectors, at least one enterprise will remain in the public sector but the private sector will also be allowed. In other sectors, public sector enterprises will be privatised, the timing for which will be based on feasibility. To minimise wasteful administrative costs, the number of enterprises in strategic sectors will ordinarily be only one to four; others will be privatised or merged or will be brought under holding companies.

Dhiraj Relli, MD & CEO, HDFC Securities feels this is a welcome announcement. "If this bold announcement is quickly transmitted into action, then it could unlock a lot of value," Relli said.

While the FM said that a detailed policy for the same would soon be issued, a look at the current sectoral classification of the Central Public Sector Enterprises (CPSEs) in India will help you understand better.

The latest public enterprise survey showed there were 348 CPSEs as on March 31, 2019, out of which 249 are operating CPSEs and 86 are under construction. The remaining 13 CPSEs were under closure or liquidation. These were diverse companies categorised into five sectors (including enterprises under construction and 21 cognate groups, as per their core line of activities fulfilling various macroeconomic activities). 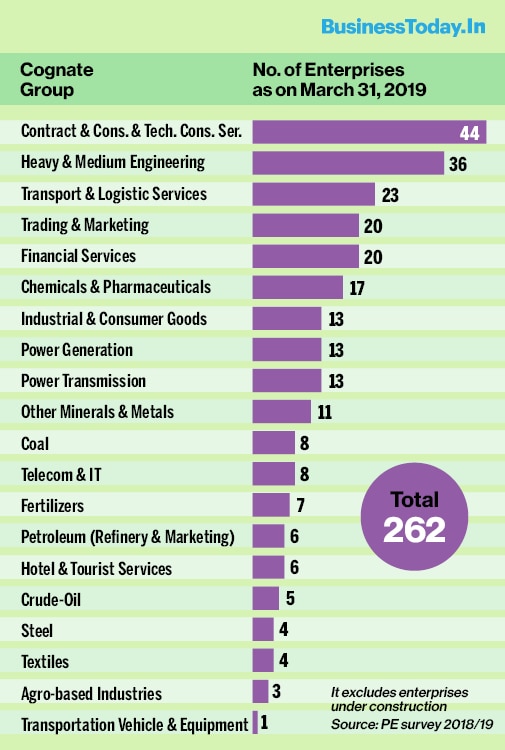 Based on the broad categorisation, a lion's share of CPSEs, close to 51 per cent, belongs to the services sector, followed by 101 falling under the manufacturing, processing and generation, which had a share of nearly 39 per cent. The balance of 9.2 per cent CPSEs belonged to the mining and exploration sectors and only three were from agriculture.

A detailed break-up exhibited that contract and construction and technical consultancy services, heavy & medium engineering, transport & logistic services, trading & marketing and financial services had 20 or more CPSEs under them.

There were 17 CPSEs under the chemicals and pharmaceuticals industry and around 13 CPSEs each belonged to industrial & consumer goods, power generation and power transmission. While sectors such as coal, telecommunication and information technology and petroleum (refinery and marketing) had less than 10 CPSE under them, five CPSEs were from the crude-oil sector and four each from steel and textiles.