News
LATEST
Economy Politics
What an irony! Mainland China beats US to be India's biggest trade partner in H1FY21

What an irony! Mainland China beats US to be India's biggest trade partner in H1FY21

What an irony! At a time when the two nations' diplomatic, military and economic relations have hit a new low, mainland China has emerged as India's biggest trade partner in the first half of financial year 2020-21, pipping the US, which had held that position since 2018-19.

In a year that has been ravaged by the pandemic, India's overall trade with the world outside has suffered a 32.46 per cent drop in value terms at $275 billion. Mainland China has gained over the US by suffering less. Indo-China bilateral trade registered a 15 per cent decline at nearly $38 billion while trade with the US dropped 27.5 per cent at $33.54 billion. Even on the large base, India's trade with China has suffered the least as compared to any other region in the world. 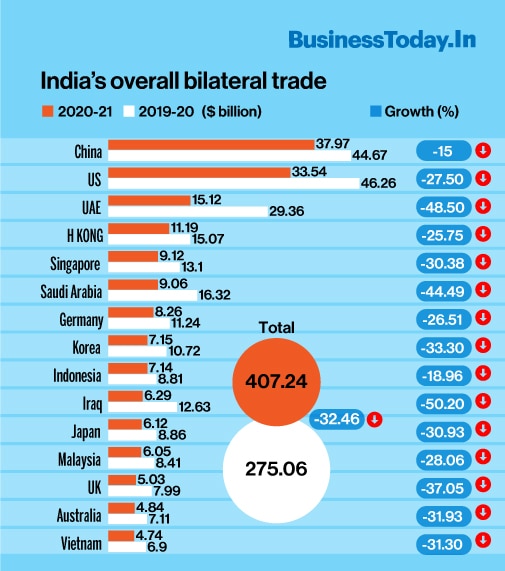 Two factors have helped Indo-China trade. While India's overall imports have dropped nearly 40 per cent this fiscal at $149.53 billion, imports from China have dropped by only 24.53 per cent at $27.37 billion. In comparison, imports from the US declined 41 per cent and from the middle eastern countries like UAE, Saudi Arabia and Iraq -- India's main crude oil suppliers, by 42 per cent, 53 per cent and 52 per cent, respectively. The only other region to show similar resilience in imports was Hong Kong from where many of Chinese origin imports is routed to India. Like China, India's bilateral trade with Hong Kong has also, as a result, suffered less -- declining by 25.7 per cent at $11.2 billion. On its own, Hong Kong is India's fourth largest trade partner. Trade with China and Hong Kong together, was at $49.16 billion, 17.7 per cent less than in H1 2019-20.

The second factor that has contributed to India-China trade this year, is robust export of goods and merchandise from India to China. At a time when overall exports declined by 21.13 per cent at $125.53 billion, exports to China grew by a robust 26.2 per cent at $10.16 billion. Exports to most other regions including the US -- India's largest export destination, has declined. "China was first to open up its economy and it simply came to the international markets and gobbled up whatever was available. They bought a lot of steel and iron ore from India in the middle of the year and that is what the figures indicate," said a commerce ministry official. "This is a very unusual year. A lot of goods that were ordered last fiscal are reflected on the books this year. So, we should take it with a pinch of salt."

The relatively modest decline in imports from China maybe surprising as due to rising geopolitical tensions and China's alleged role in COVID-19, there has been a proliferation of anti-China feeling in India. Trade organisations like Confederation of All India Traders have been campaigning against Chinese goods vowing to boycott as many as 3000 items that are usually imported from across the great wall. It has even set a target of reducing imports from China by as much as $13.3 billion by next December. 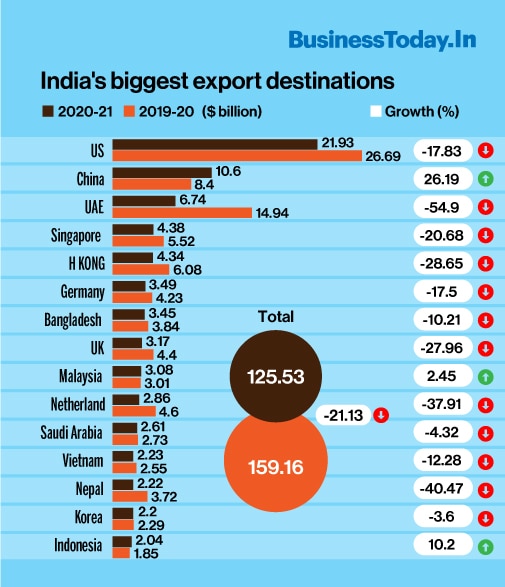 At the same time, the government has also taken a number of steps to curb imports from mainland China. These include a partial ban on import of colour televisions and a complete ban on import of air conditioners and refrigerants. Safeguard duties on import of solar panels and modules were also extended for a third year in July while anti-dumping duty has been imposed on a range of goods imported from China such as digital printing plates, aniline -- used for dyes and drugs, synthetic rubber and steel and glass measuring tapes among others. India also decided to screen each and every FDI proposal from China that has led to a hold up of the entry of a number of Chinese automobile players like Great Wall Motors, Geely, Changan and BYD.

Further, 267 software applications with origins in China have been banned in the country over the last three months. The bottom line is Chinese goods and investments are no longer encouraged in India. The proof of that, however, is yet to show in the numbers.

"It is too early to gauge that. The policy actions take some time to show on the ground. For them to be visible on trade statistics also takes a bit longer," said a government official. "This is not a short-term thing being done for short-term gains. It is a long-term strategy. For sure, the numbers will follow."