To enable a proper and fast implementation of the proposed food security law, the food ministry plans to revamp the FCI in two weeks and weed out corruption from the public sector's high ranks.

Checking pilferage and mechanisation of the FCI are challenging tasks before the ministry.
A.M. Jigeesh
The food ministry is trying to tame its own "white elephant" - the Food Corporation of India (FCI) . It will announce a policy to revamp the FCI in two weeks. The rampant corruption in the FCI ranks is the main reason for the overhaul. The ministry fears, unless cleaned, the FCI could slow down the implementation of the proposed food security law. The public sector behemoth is also bogged down by an over-centralised bureaucratic structure.

FCI is the nodal agency for the distribution of foodgrain through the public distribution system. It also maintains "a satisfactory level of operational and buffer stocks" of foodgrain to ensure food security . Food minister K.V. Thomas said he is looking at various study reports, submitted by government and other agencies, to restructure the FCI. A review meeting of the FCI operations, chaired by the minister, was also held last week. 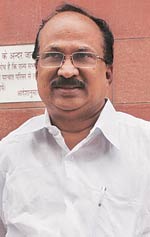 Food minister K.V. Thomas plans to restructure the FCI.
"FCI is a white elephant. We are trying to revamp it from top to the bottom. It cannot be allowed to function in the present manner," Thomas said. The minister said FCI has a larger role to play in the wake of the government's decision to implement a food security regime.

"Modernisation of the FCI is important for strengthening the food security of the country. There are a number of corruption charges against several FCI officials. Several such cases have come to my notice. The FCI management needs to be made effective," Thomas added.

Click here to Enlarge
The government is considering restructuring the FCI mainly in four different areas. Sources in the food ministry indicated that the key focus will be on the agency's organisational structure. The ministry is also considering the "decentralisation" of the FCI.

Dividing the FCI into at least six zones is one proposal at the ministry's table. The existing mechanism of including MPs and MLAs of a locality in the advisory panels of the FCI is also being strengthened.

At the moment, the FCI has a centralised system with a chairman and managing director heading its operations. "There are at least half a dozen senior IAS officers on FCI payrolls. A number of other senior officials and technocrats are also involved in its operation. We want to make full utilisation of its staff," a senior government functionary, who is aware of the government's plans, said. The FCI has about 30,000 employees.

The ministry also plans to "improve" the FCI by inducing fresh blood. No major recruitments were carried out by the agency in the past five years. Sources also indicated that the FCI will soon appoint more officers, particularly in the quality control department.

Settling labour-related issues between trade unions and management in a speedy manner is also on the ministry's agenda. Another major issue is creating an "institutional mechanism", particularly with the railways, for transport of the foodgrain. The food ministry's view is that there should be more wagons and rakes from the railways at least during the peak procurement months.

"During the peak kharif procurement in March, April and May and rabi procurement in September and October, the railways can focus on foodgrain transportation. The bulk of the procurements are concentrated in Punjab, Haryana, Andhra Pradesh and Tamil Nadu," a food ministry official said. During peak season, Punjab sends 18 to 20 rakes of foodgrain (approximately 50,000 tonnes) a day to other states.

Checking pilferage and mechanisation of the FCI are challenging tasks before the ministry. "Wastage has to be brought down. Pilferage has to be stopped. Mechanisation is an effective way to counter such menaces. We plan to develop modern facilities such as a temperature control mechanism for storage of foodgrain. Tracking the transport movement online, putting the storage areas under CCTV surveillance are some such steps we have already initiated," the government official added.