News
LATEST
Decoding Slowdown: Despite recapitalisation, PSBs are high in NPAs and low in lending

With the finance minister's declaration of an upfront capital infusion of Rs 70,000 crore, the PSBs have now been recapitalised to the extent of Rs 3.19 lakh crore.
Prasanna Mohanty

Higher investment is billed as "the key" to reviving India's economy which is reeling under a slow down. But the central government's revenues have fallen from 10.1% of the GDP in 2010-11 to 8.2% in 2018-19 and its expenditure from 15.4% of the GDP to 12.2% during the same period. The private sector is battling with low industrial production and capacity utilisation and has, therefore, no need for fresh investments.

The banks, particularly the public sector banks (PSBs), have their own sets of problems with non-performing assets (NPAs) impeding credit outflows. That is why the central government has been recapitalising the PSBs since 2014-15 (FY15) and continues to do so but there are little signs of improvement.

With the finance minister's declaration of an upfront capital infusion of Rs 70,000 crore, the PSBs have now been recapitalised to the extent of Rs 3.82 lakh crore. Between FY15 and FY19, the government had infused Rs 2.46 lakh crore and the PSBs had mobilised another Rs 0.66 lakh crore on their own.

The objective of recapitalisation is "to pursue timely resolution of NPAs", as the government has explained. NPAs are bad debts and get written off eventually. Governments compensate for this loss by infusing public money to improve liquidity, and thereby credit flow to various sectors of the economy.

The RBI had identified three reasons for "the spurt in stressed assets NPAs" during its 2015 asset quality review (AQR): (a) aggressive lending practices (b) wilful default/loan frauds/corruption in some cases and (c) economic slowdown. The economic slowdown, as identified by the RBI then, is not a recent phenomenon as it may appear to be.

How has the capital infusion helped? Here we take a look.

The RBI data on credit outflows of the scheduled commercial banks (SCBs) to the non-food sector - comprising industry, services, personal loans and agriculture and allied activities shows an overall declining trend since FY11which continued post FY15 as well but registered some improvement in FY19. 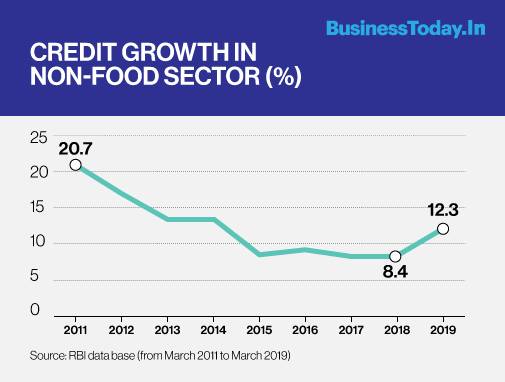 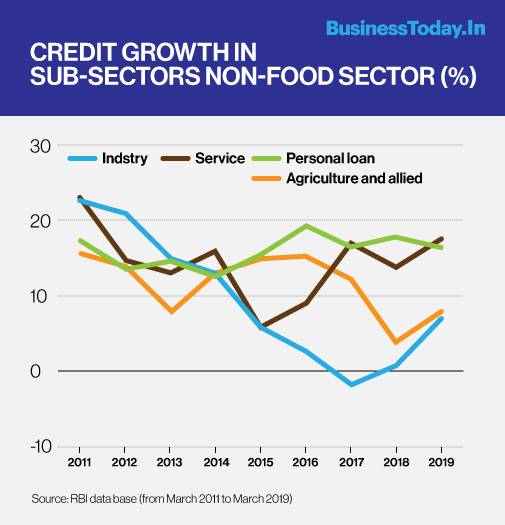 State of NPAs in PSBs and SCBs

The capital infusions are meant only for the PSBs. The SCBs are those that are listed in the Second Schedule of the RBI Act of 1934 and include PSBs, private banks as well as foreign banks which are providing normal banking services in India.

How has the capital infusion impacted the NPAs?

The GNPA ratio for the SCBs is much lower (see the graph below), indicating better financial health of the private and foreign banks (within the SCBs). 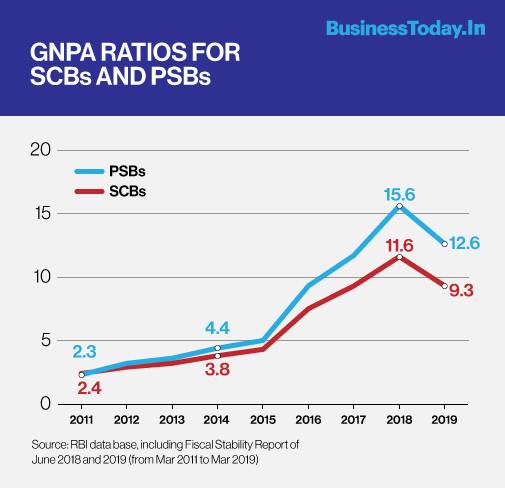 Similar is the case with the Net NPA (NNPA) ratio - NNPA as a percentage of net advances (credit or loans), again indicating better asset management by the private and foreign banks. Extent of NPAs in PSBs

That was after Rs 3.21 lakh crore had been written off and Rs 3.12 lakh crore of capital was infused into these banks between FY15 and FY18.

The PSBs have been writing off their NPAs every year since FY05 (for which data is available) - except for three years from FY06 to FY08. In FY18, the total amount written off stood at Rs 1.29 lakh crore. Recovery of stressed assets indicates the efficiency of banks. Going by this, the PSBs don't have a healthy record either. The annual reduction achieved as a percentage of the GNPAs at the beginning of the year shows a consistent downward trend with marginal improvement towards the end. Financial health of the PSBs

The good news is that the PSBs' capital adequacy or provision coverage ratio (PCR) - provisions against bad loans - has improved from 47.1% in FY18 to 60.8% in FY19. So is the case with the SCBs too.

According to the RBI, India's overall financial system remains stable despite some dislocation of late (IL&FS trouble), though it points out (FSR June 2019) that the banking stability indicator (BSI) gives a mixed picture. "While banks' asset quality and soundness (have) improved, balance sheet liquidity, i.e., proportion of liquid assets and stable liabilities, as also profitability need improvement".

As such, the challenges faced by the PSBs are not over yet.