In a historic moment for Indian aviation, Air India's longest direct route flight, with all women crew landed at Kempegowda International Airport in Bengaluru on Monday 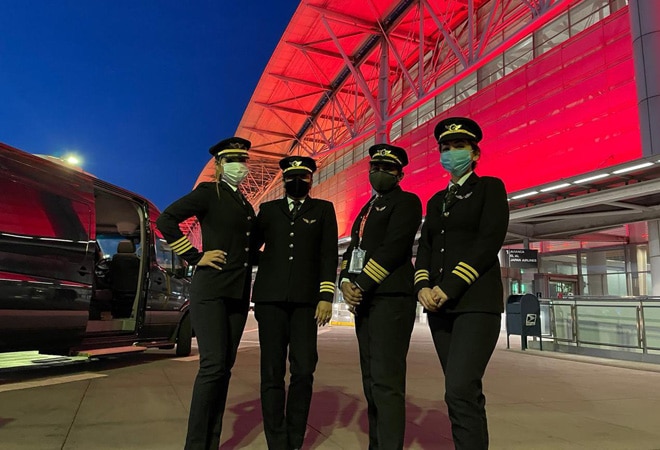 In a historic moment for Indian aviation, Air India's longest direct route flight, with all women crew landed at Kempegowda International Airport in Bengaluru on Monday.

The flight took off from San Francisco on Sunday, January 10 going over the North Pole and took the Atlantic route, covering a distance of 16,000 km to reach Bengaluru.

Zoya Aggarwal, the captain of Air India's inaugural San Francisco-Bengaluru flight said, "Today, we created world history by not only flying over the North Pole but also by having all women pilots who successfully did it. We are extremely happy and proud to be part of it. This route has saved 10 tonnes of fuel".

Pilot Shivani Manhas said: "It was an exciting experience since it was never done before. It took almost 17 hours to reach here".

Captain Zoya Aggarwal, leading the crew, has more than 8,000 flying hours under her belt, including 10 years' command and 2,500 hours on the Boeing 777. Air India claims to have the highest ratio of female employees of any airline in the world.

According to Air India, the AI176 flight flew at an altitude of 37,000 feet at a speed of 557 knots/1032 kmph.  The flight was operated by a 12-year-old Boeing 777-200LR, registration VT-ALG and marked with the name 'Kerala' on the exterior and painted with the Mahatma Gandhi motif.

The plane has a seating capacity of 238 seats, with eight in first class, 35 in business class, and 195 in the economy. Besides the cockpit crew, there were 12 cabin crew on board.

So far, Air India operated non-stop flights from Delhi to New York, Newark, Washington DC, San Francisco and Chicago and from Mumbai to Newark and New York. The state-run carrier is also planning to start its first-ever non-stop service between Hyderabad and Chicago on January 15, 2021.