Chandrayaan 2 Launch Live: Chandrayaan 2 will also explore discoveries made by Chandrayaan 1, such as the presence of water molecules on the Moon and new rock types with unique chemical composition 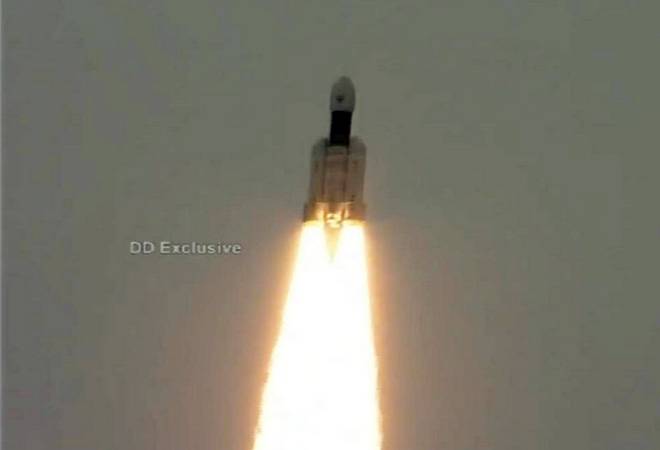 Chandrayaan 2 Launch Live: A week after the Chandrayaan-2 lift-off was aborted due to a technical snag, Indian Space Research Organisation (ISRO) launched India's second mission to the Moon at 2.43 pm today (July 22). The Chandrayaan-2, which will go the Moon's south-polar region, aims to explore its surface for the signs of water and possibly new origins of energy. The Rs 978-crore Moon mission was launched from the second launch-pad at the Satish Dhawan Space Centre, Sriharikota, in Andhra Pradesh. India's second Moon odyssey comes 11 years after ISRO's successful first lunar mission Chandrayaan 1, which had created history by creating as many as 3,400 orbits around Moon.

BusinessToday.In brings you all the latest updates on ISRO's second Moon mission Chandrayaan-2

Many congratulations to Team #Chandrayaan2@isro for the successful and seamless launch ! pic.twitter.com/LINKS5ZHUk

4.28 PM: US Embassy in India joins in to shower wishes on ISRO.

Congratulations to ISRO scientists on flawless launching of #Chandrayaan2 from Sriharikota

Team ISRO scripted a new chapter in India’s space history with the launch of this ambitious and indigenous Mission to Moon.

The nation is extremely proud of its scientists and Team ISRO.

4.24 PM: "I'm extremely happy to announce that the GSLVMkIII-M1 successfully injected Chandrayaan-2 spacecraft into Earth orbit. It is the beginning of a historic journey of India towards moon and to land at a place near South Pole to carry out scientific experiments," said ISRO Chief K Sivan.

I salute @Isro scientists for making India a space super power by successfully launching #Chandrayaan2. I wish the mission a grand success.

4.22 PM: President Kovind calls the Chandrayaan-2 launch a proud moment for all Indians.

The historic launch of #Chandrayaan2 from Sriharikota is a proud moment for all Indians. Congratulations to our scientists and engineers for furthering India's indigenous space programme. May @ISRO continue to master new technologies, and continue to conquer new frontiers

4.20 PM: "I stand and salute our scientists," said Anand Mahindra.

Was waiting to see the @isro folks hug each other before breathing normally again! Validation of our cryogenic tech is a technological breakthrough. It will enable us to make many more moon missions. I stand & salute our scientists. They are deservedly our new celebrities 🙏🏽 https://t.co/O0QC0CYkQn

Indian at heart, Indian in spirit!

What would make every Indian overjoyed is the fact that #Chandrayaan2 is a fully indigenous mission.

It will have an Orbiter for remote sensing the Moon and also a Lander-Rover module for analysis of lunar surface.

I congratulate our scientists at @isro for the successful launch of #Chandrayaan2 and setting yet another benchmark in the field of space technology. A grateful nation is proud of them.

#Chandrayaan2 is unique because it will explore and perform studies on the south pole region of lunar terrain which is not explored and sampled by any past mission.

This mission will offer new knowledge about the Moon.

WATCH: L-110 ignites and the S200 rockets separate from the main rocket. #Chandrayaan2#ISROpic.twitter.com/q8D85SPfG2

2.23 PM: Watch live visuals of the launch of Chandrayaan 2 by GSLV MkIII-M1 vehicle.

#ISRO#Chandrayaan2
As our journey begins, do you know what is the distance of Moon from Earth? The average distance is 3, 84, 000 km, Vikram lander will land on Moon on the 48th day of the mission, which begins today.
Here's different view of #GSLVMkIII-M1 pic.twitter.com/4LFEmT2xxZ

12.45 PM: The highlights of the mission that'll make India the first country to soft land on the south pole of the moon.

7/7: And the day has arrived as the Chandrayaan-2 will lift off today at 2:43 pm! Here are the highlights of the mission which will make India the first country to soft land on the south pole of the moon. #ISRO#ISROMissions#GSLVMkIII#Chandrayaan2@isropic.twitter.com/kxl63eq0BU

12.30 PM: The scientific objectives of Chandrayaan 2

Moon provides the best linkage to Earth's early history. It offers an undisturbed historical record of the inner Solar system environment. Though there are a few mature models, the origin of Moon still needs further explanations. "Chandrayaan-2 will attempt to soft land the lander - Vikram and rover- Pragyan in a high plain between two craters, Manzinus C and Simpelius N, at a latitude of about 70 degree south," says ISRO.

The Moon is the closest cosmic body at which space discovery can be attempted and documented. It is also a promising test bed to demonstrate technologies required for deep-space missions. Chandrayaan 2 attempts to foster a new age of discovery, increase our understanding of space, stimulate the advancement of technology, promote global alliances, and inspire a future generation of explorers and scientists.

11.53 AM: Filling of Liquid Hydrogen for the Cryogenic Stage (C25) of Chandrayaan 2 has commenced, says ISRO.

11.45 AM: Chandrayaan-2 has several science payloads to expand the lunar scientific knowledge through detailed study of topography, seismography, mineral identification and distribution, surface chemical composition, thermo-physical characteristics of top soil and composition of the tenuous lunar atmosphere, leading to a new understanding of the origin and evolution of the Moon.

The GSLV Mk-III (Geosynchronous Satellite Launch Vehicle Mark) will carry Chandrayaan 2 to its designated orbit. This three-stage vehicle is India's most powerful launcher to date, and is capable of launching 4-ton class of satellites to the Geosynchronous Transfer Orbit (GTO).

Chandrayaan 2's Rover is a 6-wheeled robotic vehicle named Pragyan, which translates to 'wisdom' in Sanskrit. It can travel up to 500 m (half-a-km) and leverages solar energy for its functioning. It can only communicate with the Lander.

The Lander of Chandrayaan 2 is named Vikram after Dr Vikram A Sarabhai, the Father of the Indian Space Programme. It is designed to function for one lunar day, which is equivalent to about 14 Earth days. Vikram has the capability to communicate with IDSN at Byalalu near Bangalore, as well as with the Orbiter and Rover. The Lander is designed to execute a soft landing on the lunar surface.

10.22 AM: People gather to witness the launch of Chandrayaan 2 from Satish Dhawan Space Centre at Sriharikota, which is scheduled at 2.43 pm.

Andhra Pradesh: People gather to witness the launch of #Chandrayaan2 from Satish Dhawan Space Centre at Sriharikota which is scheduled at 2.43 pm. pic.twitter.com/OlazBJIBCe

10.01 AM: "Less than five hours for the launch! Filling of Liquid Oxygen for the Cryogenic Stage(C25) of #GSLVMkIII-M1 commenced," says ISRO.

Less than five hours for the launch !!!
Filling of Liquid Oxygen for the Cryogenic Stage(C25) of #GSLVMkIII-M1 commenced#Chandrayaan2#ISRO

10.00 AM: At the time of launch, the Chandrayaan 2 Orbiter will be capable of communicating with Indian Deep Space Network (IDSN) at Byalalu as well as the Vikram Lander. The mission life of the Orbiter is one year and it will be placed in a 100X100 km lunar polar orbit.

9.50 AM: Some advancements on the spacecraft include:

9.47 AM: Chandrayaan 2 will be aided in achieving its mission by some of India's most advanced engineering marvels. Its integrated module includes ISRO's most powerful launch vehicle to date and a wholly indigenous rover.

9.45 AM: Some of the technological challenges of this mission are:

9.30 AM: The lunar South Pole is intriguing as its shadowed surface area is much bigger than at the North Pole. There also is a likelihood of water being present in the areas that permanently in shadow around the lunar South Pole. Moreover, the South Pole region has craters that are cold traps and comprise a fossil record of the early solar system. According to Isro, the Chandrayaan-2 mission will help to expand the boundaries of human knowledge.

9.23 AM: On the day of landing, the lander will separate from the Orbiter and then perform a series of complex maneuvers comprising of rough braking and fine braking. Imaging of the landing site region prior to landing will be done for finding safe and hazard-free zones.

8.56 AM: Indian Space Research Organisation will launch Chandrayaan 2 at 2:43 pm from the Satish Dhawan Space Centre at Sriharikota.

8.52 AM: The Chandrayaan-2 lunar mission aims at improving the knowledge of the Moon with discoveries that will be beneficial to India and increase humans' understanding of space.

8.51 AM: The Chandrayaan-2 lunar mission intends to soft land the rover Pragyan and lander Vikram to an elevated plain, which is close to the Moon's South Polar Region.

8.50 AM: With Chandrayaan 2, India is seeking to become the fourth country to land on the Moon after the US, China, and the former Soviet Union.

Also read: All you need to know about India's most advanced spacecraft Chandrayaan 2

8.20 AM: "All preparatory work for Chandrayaan 2 launch completed. Technical snags that developed in the first attempt have been rectified. Chandrayaan-2 will perform 15 crucial maneuvers in days to come," ISRO Chairman K Sivan said on Sunday.

ISRO Chief, K Sivan: All preparatory work for #Chandrayaan-2 launch completed. Technical snags that developed in the first attempt have been rectified. Today evening, the countdown for the launch will begin. Chandrayaan-2 will perform 15 crucial maneuvers in days to come. pic.twitter.com/o35aT0U956

8.00 AM: The launch countdown of GSLVMkIII-M1/Chandrayaan2 commenced at 6.30 pm on Sunday, says ISRO.

Taking billion dreams to Moon, Chandrayaan-2 to be launched on Monday