Mumbai Rains: The IMD has issued a warning to fishermen not to risk going into the Arabian Sea which will have a rough course with high waves and wind speeds at 40-50 kmph till Friday. 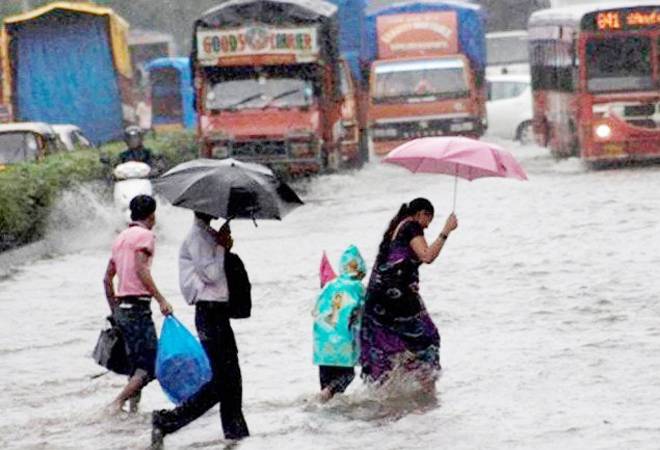 Mumbai Rains: Life has again been thrown out of gear in Mumbai after heavy rainfall crippled the city. Things are likely to remain same as the Indian Meteorological Department (IMD) has predicted very heavy rainfall in India's financial capital and south Konkan area on Tuesday.

The IMD has issued a warning to fishermen not to risk going into the Arabian Sea which will have a rough course with high waves and wind speeds at 40-50 kmph till Friday.

Heavy rains lashed Mumbai on Monday as well as the monsoon remained vigorous over the western region, while there were scattered rains in the north, where three children died in a rain-related incident in Uttar Pradesh.

The national capital, however, saw a hot and humid day, with the mercury settling at 36.7 degrees Celsius - a notch above normal. The weatherman has predicted partly cloudy day on Tuesday with the possibility of light rains towards the afternoon.

Heavy rains made a reappearance in Mumbai after a hiatus, affecting road and rail traffic and briefly disrupting operations at the city airport. Office-goers braved torrential downpour in many parts of the metropolis to reach their places of work. The suburbs received around 20 mm rainfall in just three hours starting 8.30 am, an IMD official here said. This caused water-logging on rail tracks at Ghatkopar, Kanjurmarg, Sion and other stations due to which local trains on the Central Line were running slow.

Mumbai airport operations were briefly suspended in the morning due to heavy rains, which prompted the airport operator to divert three city-bound flights, a Mumbai International Airport Limited official told PTI. No flights were cancelled, he said. Runway operations at the Mumbai airport remained suspended for nearly 20 minutes from 9.12 am due to heavy rains, he added. The Mumbai municipal corporation said it regrets the inconvenience caused to Mumbai residents owing to heavy rain.

Rains also occurred in parts of Rajasthan, with Mangliawas in Ajmer recording a maximum of 8 cm rainfall, according to the Meteorological (MeT) department. Bhinay in Ajmer recorded 7 cm rain, Nimbahera in Chittorgarh received 5 cm rainfall and several other areas recorded below 5 cm rainfall between Sunday and Monday morning.

Many parts of Himachal Pradesh received light to very heavy rainfall in the past 24 hours, the MeT department said. Chandigarh, the joint capital of Haryana and Punjab, received 29.1 mm of rainfall, bringing respite to the residents from hot and humid weather conditions. The city recorded a maximum temperature of 35.6 degrees Celsius, a MeT department report said.

Meanwhile, the mercury continued the upward trend in Jammu and Kashmir, with Srinagar and Leh recording the season's hottest day. The mercury settled at 33.2 degrees Celsius in Srinagar. The day temperature in the city was three notches above normal, a MeT department spokesperson said.

Leh township of the Ladakh region also recorded the season's hottest day at 30.3 degrees Celsius, while the nearby Kargil town recorded a high of 28.9 degrees Celsius, the spokesperson said. The maximum temperature in the winter capital, Jammu, was 38.1 degrees Celsius -- 2.2 notches above normal.