Solar Eclipse 2019: There's a new PM Modi meme in town and he loves it!

Annular Solar Eclipse 2019: Earlier PM Modi who is in Kozhikode, tweeted a bunch of photos and said that he was enthusiastic about the eclipse but could not see the Sun due to cloud 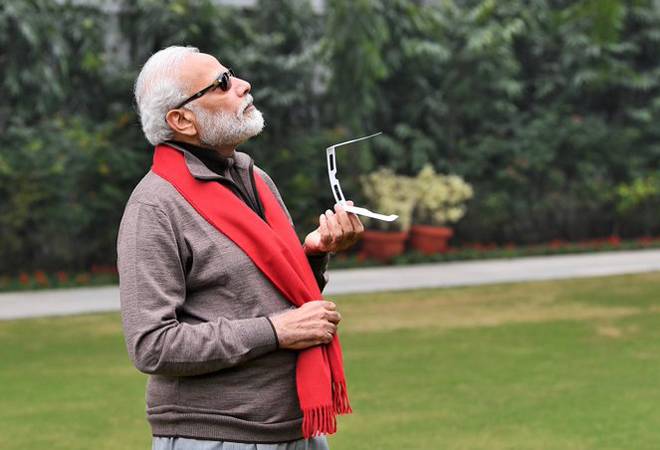 Solar Eclipse 2019: PM Modi shared pictures of him trying to catch a glimpse of the suryagrahan

Solar Eclipse 2019: Prime Minister Narendra Modi acknowledged that he was enthusiastic, like many other Indians, to witness the Solar Eclipse taking place on Thursday. He shared a few pictures of trying to catch a glimpse of the eclipse as well as interacting with experts. One of the images is already on its way to the meme hall of fame. And PM Modi loves it!

Gappistan Radio retweeted the picture of the Prime Minister and said, "This is becoming a meme." PM Modi replied to them and said, "Most welcome...enjoy."

Unfortunately, I could not see the Sun due to cloud cover but I did catch glimpses of the eclipse in Kozhikode and other parts on live stream. Also enriched my knowledge on the subject by interacting with experts. pic.twitter.com/EI1dcIWRIz

While cloud played spoilsport in many parts of the country including Delhi-NCR and Mumbai, Southern India was able to see 100 per cent of the phenomenon. The Solar Eclipse 2019 was well visible in Chennai, Tiruchirapalli, Udhagamandalam and Madurai.