Tesla CEO Elon Musk has offered $43 billion to buy out Twitter and the company is preparing for a boardroom fight.

Musk has offered $43 billion to buy out Twitter and the company is preparing for a boardroom fight.
Incidentally, many who hold substantial stakes in Twitter are closing ranks.

One of the stakeholders is the Saudi Arabia-based businessman Talal Alwaleed who holds a substantial stake in the company along with the Saudi government.

Alwaleed immediately rejected the offer made by Musk on April 14, following which the Tesla CEO is now attacking Twitter's Saudi links.

After Musk made the offer to buy out the social media giant, Alwaleed tweeted, "I don't believe that the proposed offer by Elon Musk comes close to the intrinsic value of Twitter given its growth prospects."
"Being one of the largest and long-term shareholders of Twitter, Kingdom Holding Company and I reject this offer," he said.

I don't believe that the proposed offer by @elonmusk ($54.20) comes close to the intrinsic value of @Twitter given its growth prospects.

Being one of the largest & long-term shareholders of Twitter, @Kingdom_KHC & I reject this offer.https://t.co/Jty05oJUTk pic.twitter.com/XpNHUAL6UX

Alwaleed's public stance has once again brought into the spotlight Twitter's links with the Saudi government and businessmen, and Musk is capitalising on it. As Twitter is preparing to fight his offer, the world's richest man is taking some very public potshots at the company.

Musk has stated that among the reasons why he is offering to buy Twitter is to ensure that the social media platform becomes a citadel of free speech, without censorship. And by drawing attention to Twitter's Saudi ties, Musk is alluding that Twitter has connections with authoritarian regimes and, thus, is not the kind of free speech advocate that the world needs. Musk emphasised on this point in his reply to Alwaleed.

"Interesting. Just two questions, if I may. How much of Twitter does the Kingdom own, directly & indirectly? What are the Kingdom's views on journalistic freedom of speech?" Musk tweeted. 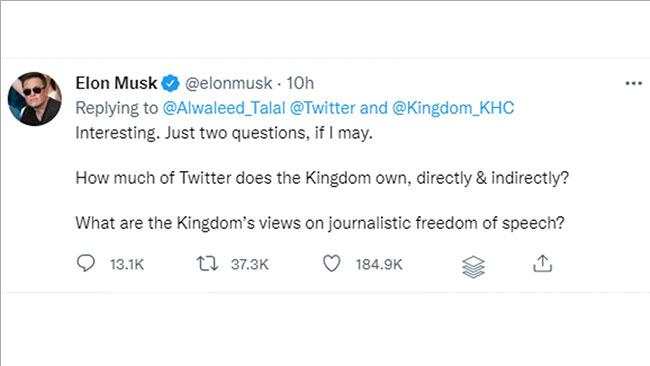 Musk had on April 14 offered to buy Twitter in an all-cash deal for about $43 billion. In his letter to the company's chairperson, Tesla's chief wrote, "I invested in Twitter as I believe in its potential to be the platform for free speech around the globe, and I believe free speech is a societal imperative for a functioning democracy... Twitter has extraordinary potential. I will unlock it."

Hours later at a TED Talk event, Musk stated that he was not trying to buy Twitter to profit from it, rather, he said, it was all about saving civilization.