Social media users poked fun on US President Donald Trump's eldest son Eric Trump as he urged voters in Minnesota to "get out and vote" one week after the voting for the US presidential elections concluded on November 3-- when Joe Biden was declared as the President-elect. 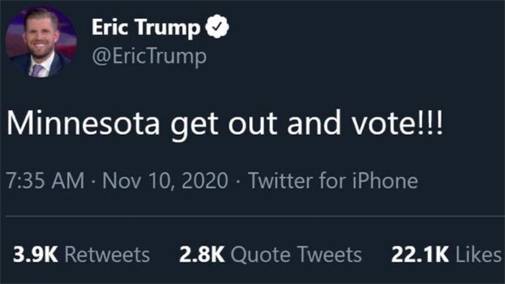 Dude, you need to go lay down. Seriously. Somethings not right. @erictrump https://t.co/iv0WGkpxzJ

Thomas got no chill

Why is Eric trump tweeting to people to get out and vote? There isnt an election every Tuesday Eric... pic.twitter.com/jLhfOlMs7N

Should we just call him 'Dumb Trump son of the week'?

you just tweeted for Minnesota to get out and vote. I thought Don Jr had already locked up "Dumb Trump Son of the Week." pic.twitter.com/NVOepSj9YE

What latest gaffe did he commit now?

Please give up at least now

It's time to give up.

This, however, is not the first time that the eldest Trump son was mocked. Previously, he was trolled for a variety of reasons: his bogus claims of ballots getting burned, 'censoring' of his posts by the Big Tech and claims of the Democratic Party spamming Trump campaign's voter fraud hotline with messages.

Eric, however, is not the only one to believe that Donald Trump won the November 3 presidential elections. While speaking to the reporters at the Foggy Bottom headquarters of the State Department, US Secretary of State Mike Pompeo also asserted that there will be a smooth transition to a second Trump Administration. The top American diplomat added that the world is keenly watching the events in the US and all votes are going to be counted.