Is it the right time for cherry-picking on Dalal Street? Data shows that 50 per cent of Nifty companies are trading at up to 64 per cent discount to their historical valuation multiple amid the ongoing consolidation in the domestic equity market since October 2021. Analysts believe that some of the companies are coming back to their fair valuation after hitting their all-time high levels in the bull market.

The benchmark NSE Nifty index has declined over 4 per cent to 16,793 on February 28, 2022 from 17,532 on October 1, 2021. Market watchers believe that sustained outflow by foreign institutional investors, rising concerns over inflation figures, hopes of faster tapering, new Covid-19 variant and now the conflict between Russia and Ukraine dampened sentiment.

Commenting on the valuations, Kranthi Bathini, equity strategist, WealthMills Securities said, “Valuations of a couple of stocks are coming down to their fair value amid the ongoing correction. I would like to add Reliance Industries and Larsen and Toubro on dips. We are also bullish on HDFC group stocks.” 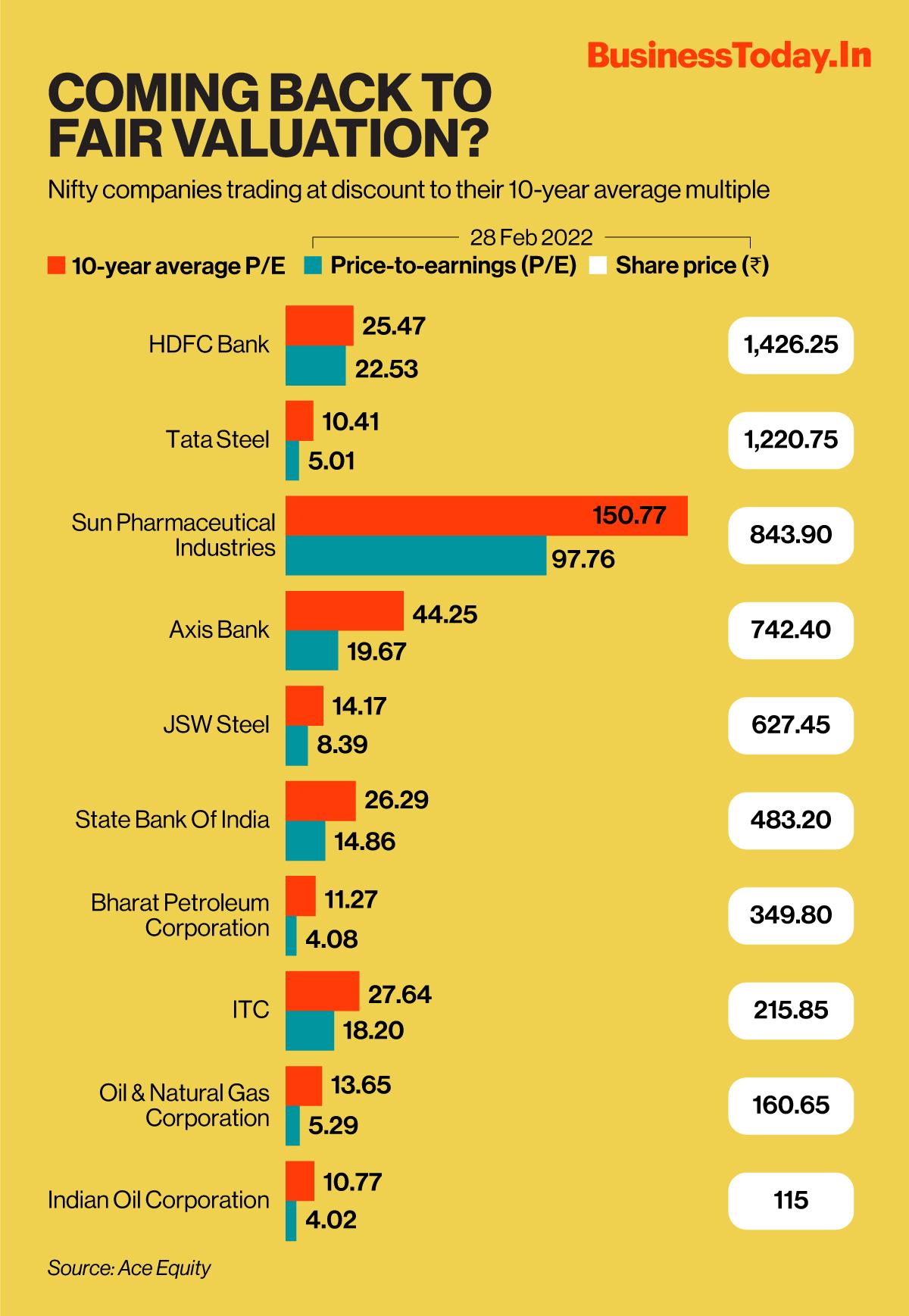 On the other hand, as many as 20 stocks were trading at a premium of more than 10 per cent against their 10-year average, demonstrating the two-faced nature of the index on valuations. Overall, trailing-12 months P/E of Nifty was at 21.59 against a 10-year average of 23.89.

Motilal Oswal Financial Services said, “Post the recent correction, the Nifty is now trading at 19 times 12-months forward P/E, which is slightly lower than its 10-year average for the first time since November 2020. Corporate earnings remained resilient, despite the challenges with Q3 and April-DecemberFY22 Nifty earnings growing at 25 per cent and 45 per cent and forward estimates for FY22E, FY23E and FY24E remaining stable at Rs 735, Rs 876 and Rs 1,006. The healthy earnings visibility can act as a cushion in an otherwise fragile external situation.”

However, the brokerage house added that if the Russia-Ukraine conflict elongates and leads to elevated energy prices for longer, it may impact earnings estimates. The Brent crude oil has jumped nearly 15 per cent to $107.43 per barrel on March 1, 2022 against $93.54 per barrel on February 18, 2022.

Motilal Oswal Financial Services further added that its portfolio construction is premised on stocks where the earnings visibility remains solid, pricing power is healthy, and the recent correction has led to moderation in valuation.