Gold to weaken, agri commodities to strengthen in near future Global equity markets traded higher in the last fortnight as hopes of more easy money from top central banks boosted risk appetite. String of weak economic data from China led to rally in Chinese shares, owing to surge in expectations of monetary stimulus from the world's second largest nation. Moreover, Mario Draghi, President of the European Central Bank (ECB), sounded optimistic regarding the quantitative easing (QE) program launched by the ECB. He also played down concerns that the ECB would have to end its more than Euro 1 trillion ($1.1 trillion) asset purchase program early. However, sharp gains were capped owing to looming concerns of interest rate hike by the Federal Reserve along with persistent geopolitical tensions in the Middle East.

Indian Rupee traded on a flat note last fortnight as favorable inflation and manufacturing data from the nation spurred bets for future rate cuts by the RBI. Adding further support to the currency was optimism in global equities and weakness in the dollar. However, RBI's decision of keeping the interest rates unchanged along with strong demand for the Greenback by importers and banks exerted pressure on the rupee. Further, RBI's intervention to keep the rupee stable and competitive in the global markets held the Indian currency from gaining sharply.

In the past fortnight, spot gold prices have hovered around the $1,200-mark as investors remained wary and cautious about the timing of the rate hike in the US. Prices rose to a seven-week high after U.S. jobs rose at the slowest pace in more than a year, fueling expectations the U.S. Federal Reserve could postpone an anticipated rate increase. However, prices dropped below $1,200-mark after the US Federal Reserve minutes revealed an interest rate hike could take place as early as June, causing the dollar to strengthen. The minutes said that "several participants" went on record saying they expected upcoming economic data would warrant an initial rate increase that month. New York Fed President William Dudley and Fed Governor Jerome Powell sketched out scenarios in which the central bank could make an initial move earlier than many now expect and move slowly on further increases.

International spot silver prices declined by more than 2 per cent in the past fortnight while MCX silver gained marginally by around 0.5 per cent. Profit booking at higher levels coupled with a strengthening dollar exerted downside pressure on prices.

LME Copper prices rose 1.5 per cent last fortnight as consistently weak data from China fuelled speculation. Policymakers of the world's biggest consumer of Copper will have to introduce further stimulus measures to boost the economy amid sluggish growth. Also, there were a number of supply disruption concerns, namely BHP Billiton which cut its production forecast for Olympic Dam following an electrical failure at its Svedala mill in Australia in February, while a road block near Freeport-McMoRan's Grasberg mine in Indonesia caused the miner to temporarily halt production in late March. Both incidents supported gains. Further, Chile, the largest producer of Copper, cut its production forecast for 2015, thereby providing another surge to prices. MCX copper prices have jumped 2 per cent in the last fifteen days in line with international trends.

In the past fortnight, WTI oil prices rose more than 15 per cent while MCX oil prices rose around 17 per cent.  Strong German economic data and uncertainty about negotiations on Iran's nuclear program led to the rally. Iran and six world powers announced a framework agreement on the OPEC member's nuclear program. But initial expectations of a quick recovery in oil exports were tempered by views that it could take longer than expected to roll back sanctions. Prices received a boost from a U.S. Energy Information Administration forecast that total crude-oil production from seven key shale regions in the country would decline by 57,000 barrels a day in May from April.

The talk of the town is the timing of the rise in interest rates by the US Federal Reserve. One thing is sure that increase in rate will happen in 2015 and it will help lower gold prices. Besides, weak investment demand also does not augur well for gold prices. Hence we expect gold prices to weaken in the coming fortnight. 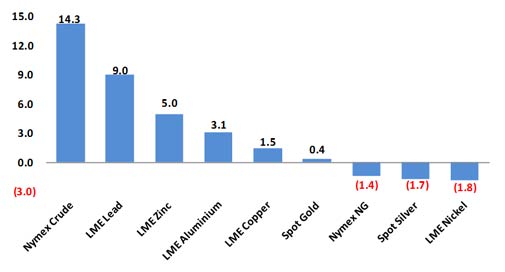 The basic fundamentals of crude remains bearish as oil markets remain bothered by over supplies. However, possibility of reduction in crude production in the US on account of declining oil rigs will be a dominant factor for prices to recover from current levels.

We expect base metal prices to trade higher as easy monetary policy in Eurozone and expectations of stimulus from China will continue to boost prices. However, concerns of rate hike by the Federal Reserve will keep a check on gains.

Chana:  - Chana prices have surged more than 3.5 per cent during the last fortnight on lower production estimates due to crop damage. The chana May contract touched Rs 4,000 per quintal for the first time in more than two years. Unseasonal rain in March brought a heavy loss to crop and can potentially delay arrivals.. The government has extended duty-free imports of pulses including chana till October 1, 2015 on possibility of shortage due to lower production estimates.

As per the Union Agriculture Ministry reports, around 11.2 lakh hectares of pulse crops were damaged till 26 March. According to the 2nd Advance Estimates, chana production is estimated at 8.28 million tons compared to 9.53 million tons last year. During Apr-Dec 2014, India imported 309.71 thousand tonnes of chickpeas, up about 12 % compared to last year. On lower production estimates and good domestic demand, chana might trade higher during the next fortnight while duty-free imports and fresh arrivals may keep pressure on chana prices.

Oilseeds and Edible oils: - In the last fortnight, there was mixed trend for oilseeds and edible oils. The oilseeds have gained on rise in local demand as there was thin supply (for soybean) and concern about the crop damage (for mustard seed). The government is planning to give export incentives for soybean meal. According to SEA data, oil meal exports are down 44 per cent during 2014-15. However, Mustard seed prices have surged 3.6 per cent during the fortnight and touched Rs 3,700 per quintal.

Refine Soy oil traded steady during the fortnight and gained just 0.1 per cent on ample supply of vegetable oil in spot market as vegetable oil imports were up 27 per cent at 11 lakh tonnes in March compared to 8 lakh tonnes  during the same period last year . Import of soybean oil rose marginally to 1, 91,150 tonnes in March compared to last year. Crude Palm Oil (CPO) futures price traded negative tracking the benchmark Malaysia CPO. India's overseas purchases of CPO rose 62 per cent to 6,82,274 tonnes in March from a month ago. Among palm oil products, import of CPO has increased 45 per cent while that of refined palm oil (RBD Palmolein) declined 54 per cent in March this year compared to last year.

Reports on lower soybean planting in world along with the good demand for soy meal might sustain the prices. Mustard seed is expected to trade on positive note on lower production estimates. However, Ref soy oil and CPO are expected to trade mixed in the coming fortnight.

Cotton, sugar - Among softs, Cotton futures traded negative note during the fortnight mainly due to subdued demand among the market participants at higher prices.

According to the Cotton Advsiory Board (CAB), cotton consumption by mills would be about 311 lakh bales in 2014-15 and total availability of cotton in the domestic market would be about 43.90 million bales. Earlier, it had estimated cotton production at 390 lakh bales, which was revised down.

Indian sugar futures also traded on negative note this fortnight on ample supply and steady demand. Food ministry is proposing to increase the import duty to 40 % to discourage cheap imports into the country. Currently, the import duty is 25%.  As per the latest estimates released by the Indian Sugar Mills Association (ISMA), India produced 263.56 lakh tonnes (lt) of sugar till April 15, about 13.8 per cent more than the same time last season. The production estimates revised upwards for this season to 270 lakh tonnes.

The cotton and sugar might trade on mixed to negative note in next fortnight on ample supply and subdued demand at higher prices. However, there may be good support for sugar prices if government agrees for creation of buffer stock.

Spices: - Last fortnight, spices complex traded on a positive note on worries about crop damage due to untimely rains. Jeera prices during the fortnight jumped about 13.4 per cent, while turmeric closed 5 per cent higher. Jeera arrivals during this season have been very low compared to last season. In the first nine months of 2014-15, Jeera exports have been 128,500 tonnes, a rise of 28 per cent compared to last year. Turmeric arrivals are low in the domestic markets as farmers are holding back their stocks in anticipation of better prices in the coming days. Coriander price increased about 3.3 per cent to Rs 9,450 per quintal on good demand and reports of massive crop damage in Gujarat and Rajasthan due to unseasonal rains during the month.

In the coming fortnight, Jeera and turmeric prices to trade on a mixed to positive note on expectation good export demand, but profit- booking is expected at higher levels. Reports on crop damage may be bullish for coriander.