Multiple estimates by multilateral institutions show the COVID-19 pandemic will hit India the hardest by sending 40 million people into "extreme poverty", worsen hunger and income inequality, and yet the government seems oblivious with no data, no estimation or policy response

Multiple studies have been warning that the pandemic-induced economic crisis would have a cataclysmic impact on the poor globally and be particularly severe in India - home to the maximum number of poor - sending millions back into poverty.

Eight months into the lockdown, estimates are becoming more definitive, though, with a caveat that the situation could worsen if the pandemic becomes more severe as many countries (the US and several European nations) are witnessing a second wave, taking the number of daily virus cases to new heights.

Latest estimate from the International Monetary Fund (IMF) reports - World Economic Outlook: A Long and Difficult Ascent, October 2020 and Fiscal Monitor: Policies for the Recovery, October 2020- shows that 90 million people globally would slip into "extreme poverty" (surviving on $1.9 a day) due to the pandemic. This is in line with the World Bank's June 2020 estimate ("Projected poverty impacts of COVID-19") which estimated 70-100 million to slip into extreme poverty.

India would account for 40 million of the 90 million the IMF says would turn extremely poor or 44.4% of all. The following graph from the IMF's Fiscal Monitor report shows that in India (extreme left), their number would rise from 80 million in 2018 to 120 million in 2020. 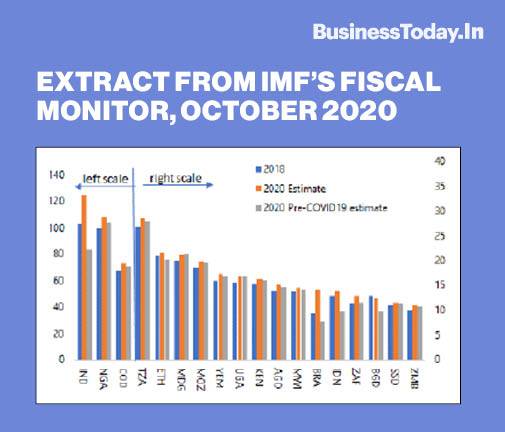 The report explains why (as have many others earlier): "The pandemic has had a disproportionate effect on low-income households in many countries because they areconcentrated in the informal sectors, are more vulnerable to job losses, have lower financial savings, and have less access to healthcare."

The IMF report quotes recent studies in both developed and developing economies to say that the pandemic is impacting the economically more vulnerable, like younger workers and women the most. Those employed in small and medium enterprises or informally employed are more vulnerable to job loss. It also points out that the pandemic would "exacerbate pre-existing trends" in the context of income inequality.

Here is a graph providing a comparative picture of income inequality (measured by Gini coefficient) in both developed and developing economies. India figures next to China entering into the pandemic (second from left in the second chart "Emerging Market and Developing Economies") 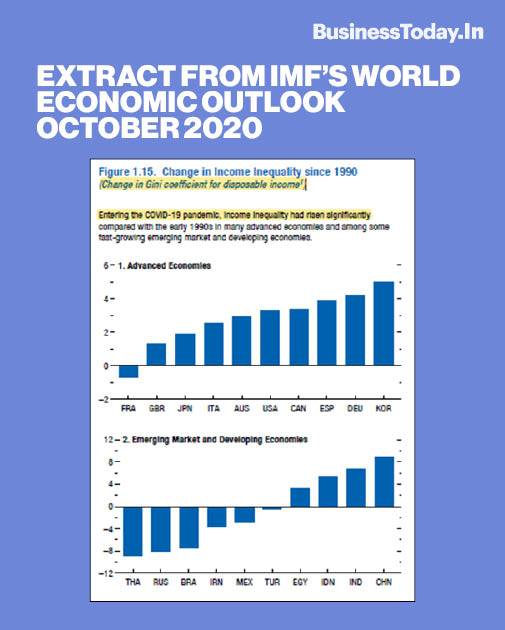 India is a basket case when it comes to its workforce: 94% of its workers are informal with little legal protection and social security cover. Here is a graph from former Niti Aayog vice-chairman Arvind Panagariya's latest book "New India: Reclaiming the Lost Glory" 2020 which shows94.2%of its workers are employed in small firms (1-50 workers), 2.3% in medium (51-200 workers) and 5.3% in large firms (more than 200 workers).

In comparison, China's 12.3% of workers are employed with small, 31.1% in medium and 56.6% in large firms. Large firms provide better protections to workers, a privilege enjoyed by very few in India (5.3%). India's recent labour reforms seek to weaken it further by stripping small firms (0-50 workers) completely off whatever legal protections they have had. (To know read "Rebooting Economy 32: Wage code leaves millions of workers out in cold ") 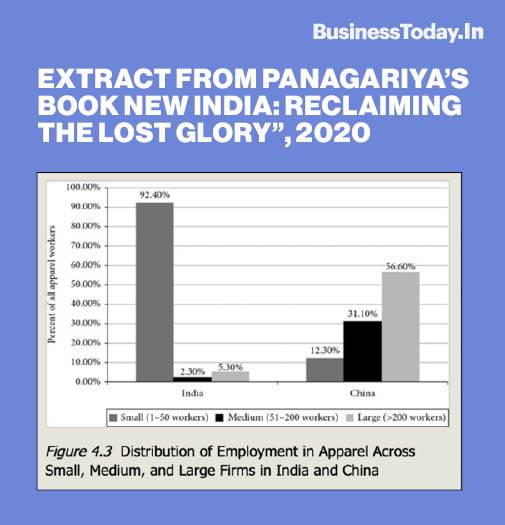 India is more vulnerable to hunger too

India's progress has been very tardy compared to its neighbours as the following graph shows. Its "child wasting" (low weight for age reflecting acute undernourishment) and "child stunting" (low weight for age reflecting chronic under-nutrition) is particularly poor. The hunger index scores are measured on a scale of 0-100, where '0' represents zero hunger. 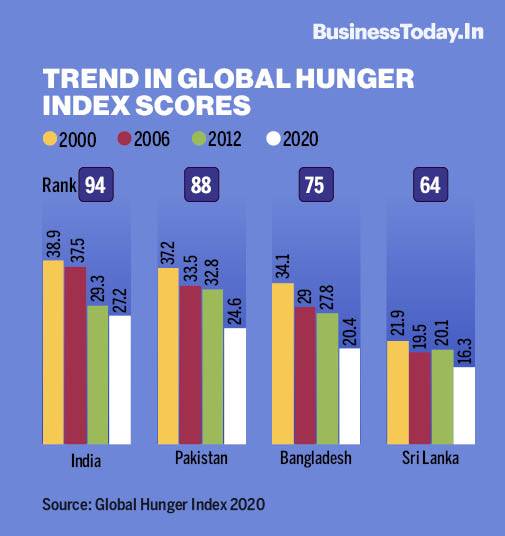 The Global Hunger Index 2020 reflects the pre-pandemic situation and comes with a warning: "In 2020, owing to the COVID-19 pandemic, the values of some of the GHI component indicators, and in turn the GHI scores, are likely to worsen, but any changes that occur in 2020 are not yet reflected in the data and scores in this year's report."

As for India, it says: "In India, like in many other countries, the pandemic is aggravating an already serious hunger situation."

That India has been slipping on hunger, poverty and income inequality indicators even before the pandemic hit is well-known. The Niti Aayog report of December 27, 2019 (SDG India - Index and Dashboard 2019-20) showed that of the 28 states and union territories it mapped, 22 saw poverty go up in 2019 compared to 2018 (no change in 4 and improvement in 2); 24 saw hunger go up (fell in 4) and 25 saw income inequality go up (fell in 3) during the same period. (For details read "Budget 2020: Niti Aayog shocker; Poverty, hunger and income inequality up in 22 to 25 States and UTs ") 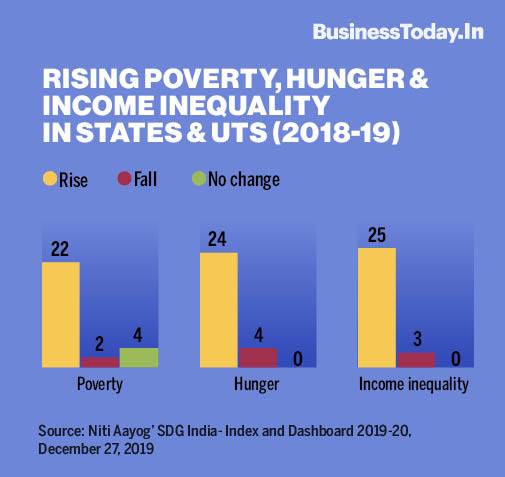 Government not bothered about rising poverty or hunger

Ironically, the government never acknowledged the Niti Aayog's report nor took corrective measures. It had done the same for growing unemployment and slowing down of the economy before the pandemic. After the pandemic hit, it never bothered to track job loss or loss of lives of migrant workers, millions of whom walked home for months - a phenomenon not witnessed anywhere else in the world - some perishing on the way.

Consequently, it did not do anything to protect jobs, unlike the OECD countries which saved 50 million jobs, or help survive loss of jobs and livelihoods of millions. In a display of gross callousness, it told the Parliament during the September 2020 session that it has no data and therefore it can't even provide compensation for deaths of migrant workers. (To know how OECD countries saved jobs read "Rebooting Economy XXIII: What stops India from taking care of its crisis-hit workers? ")

The inept and callous handling of the pandemic and the untimely and unplanned lockdown has jolted India like no other country. Its GDP growth for the April-June 2020 quarter tanked to minus 23.9% - the highest among major economies. The RBI estimates the GDP growth for the entire fiscal to be minus 9.5%, as against the IMF's estimate of minus 10.3%, while its global average is estimated to be minus 4%. (To know why read "Rebooting Economy 37: Do high-frequency data suggest V-shaped recovery? ")

With such a poor track record in handling the economy and the pandemic and the consequent human tragedies which go unacknowledged, un-remedied poverty, hunger and income inequality will progressively get worse.