In April, the World Bank released a paper saying that the COVID-19 pandemic would reverse the five years' of gains on poverty reduction by pushing 150 to 390 million people back into poverty worldwide

Several global studies published in recent weeks say that the COVID-19 lockdown is likely to send hundreds of millions of people back into extreme poverty and hunger worldwide, including in India, and impoverish an even greater number of people. A UN report says the impact "will be long-lasting".

The sheer magnitude of the impact is disturbing and needs urgent attention.

Here are some of the major findings.

On June 12, King's College London published an article saying: "COVID-19 could drive global poverty back over one billion people as the world's poorest face up to US$500 million per day in lost income".

This article was based on a study, 'Precarity and the pandemic COVID-19 and poverty incidence, intensity, and severity in developing countries', carried out by the London institution in collaboration with the Australian National University.

Also Read: Rebooting Economy VII: Where are the green shoots in Indian economy?

The three poverty lines of $1.9, $3.2 and $5.5 mentioned here are set by the World Bank for low-income, low-middle income (like India) and upper-middle-income countries, respectively. The monetary value represents per capita per day living expense. The last World Bank estimate had said that "extreme poverty" (below $1.9 per capita per day living expenses) had fallen from 1.9 billion in 1990 to 736 million in 2015 (from 36% to 10% of world population).

Other key findings are: (i) it would be the first absolute increase in people living in "extreme poverty" since 1999 and a reversal of 7-10 years of progress in reducing poverty (ii) intensity and severity of poverty likely to increase rapidly in middle-income developing countries, shifting back towards "developing countries in South Asia and East Asia", including India and (iii) the resources needed to lift the incomes of poor to the poverty line could increase by 60%, from $446 million a day to above $700 million a day.

These estimates are based on the "potential magnitude of the contraction" in household per capita incomes or consumptions at 5%, 10%, and 20% hit levels that could result from the lockdown. Though the lockdown is necessary, the study said it "could exert pernicious effects on the livelihoods of parts of the population whose income-generating capacities are restricted". These effects could furthermore interact with "pre-existing conditions of fragmented or insufficient social protection systems" and that the repercussions would last for "years to come".

How could COVID-19 impact poverty and hunger in India?

The study looked at 166 countries, including India, but singled out India for a special mention.

It said while the reference period for all other countries was 2018, for India alone it was 2015.

It explained why: "...how exactly the poverty rate changed between 2015 and 2018 is highly contentious. Felman et al. (2019) discuss the leaked report of India's National Sample Survey (NSS) that had been withheld by the government (the long-standing survey has now been abandoned). The survey showed real consumption per capita had fallen by 3.7 per cent between 2011/12 and 2017/18. This figure sits uneasily with the official GDP growth data reported for the same period."

Why does all this matter?

It added: "In short, by using the 2015 data our estimates could overestimate poverty in 2018 in India, if the GDP growth data is correct. On the other hand, if the NSS consumption per capita data is accurate, our estimates will thus underestimate it."

What it means is that its estimate for India would be off the mark because of lack of data.

Nevertheless, in all these scenarios - a contraction of 5%, 10% and 20% in per capita income or consumption expenditure - India leads the table in contributing maximum to global poverty. India is likely to add 114.9 million, 237.9 million and 525.8 million at 5%, 10% and 20% hit, respectively, to the list of impoverished.

The following graph presents India's 2015 poverty headcounts at three poverty levels and how they would change at 5%, 10% and 20% hit scenarios. 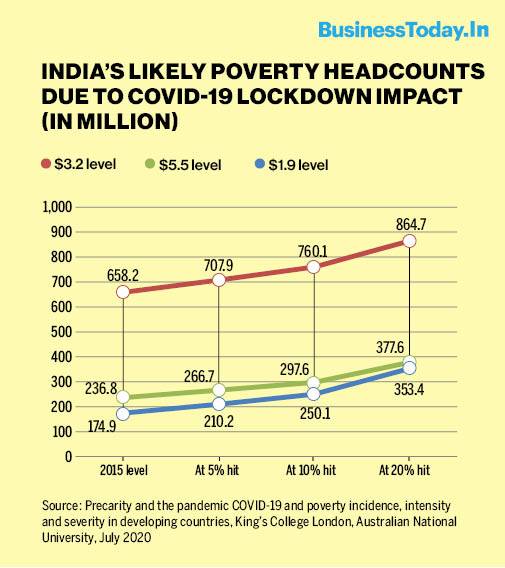 The study takes into account only the loss in income due to the pandemic, but not the of "catastrophic healthcare expenditure" which pushes 60-63 million people into poverty every year, as the 2018 Ayushman Bharat or PM-JAY programme and the 2015 draft National Health Policy say.

150-390 million likely to be pushed back to poverty: World Bank

In April, the World Bank released a paper saying that the COVID-19 pandemic would reverse the five years' of gains on poverty reduction by pushing 150 to 390 million people back into poverty worldwide.

Impact on poverty "will be long-lasting": UN

Former UN Special Rapporteur on extreme poverty Philip Alston submitted his last report, 'The parlous state of poverty eradication', on July 2, 2020, stating that "COVID-19 is projected to push more than 70 million additional people into extreme poverty and hundreds of millions more into unemployment and poverty. More than 250 million people are at risk of acute hunger."

Stating that the impact "will be long-lasting", the report criticised governments across the globe, saying that "rather than acknowledging how badly the efforts to "end poverty" have been faring, and how relentlessly the pandemic has exposed that fact, most actors are doubling down on existing approaches that are clearly failing."

His anger stems from his findings that global poverty was rising before the pandemic, not contracting as was claimed.

The New York University of Law, where Alston teaches law, quoted him saying: "Over the past decade, the UN, world leaders and pundits have promoted a self-congratulatory message of impending victory over poverty, but almost all of these accounts rely on the World Bank's international poverty line, which is utterly unfit for the purpose of tracking such progress."

He said the decline in poverty shown in the past decade is "largely due to rising incomes in a single country, China".

Poverty and hunger were rising in India even before pandemic

Its findings are presented in the graphics below. (For more, read 'Budget 2020: Niti Aayog shocker; Poverty, hunger and income inequality up in 22 to 25 States and UTs') India's response to the job and income losses caused by the pandemic has been a series of short term relief measures like meagre cash transfers (starting at Rs 500 per month), additional PDS supply, additional allocation for rural job guarantee scheme MGNREGS (Rs 40,000 crore) and clubbing together 25 existing schemes (Garib Kalyan Rozgar Yojna) to provide jobs to migrant workers in their home states (at the cost of local jobless) etc.

None of these are designed for long term solutions or address structural deficiencies that had led to job-loss growth even before the untimely and unplanned lockdown hit millions, leaving them without jobs and incomes. (For more read 'Rebooting Economy VI: Is Modi govt ignoring job crisis in India or unable to tackle it? ')

There is another reason for India to rethink its economics. The Economist predicts that COVID-19 would leave behind a smaller economy for the next 12 months, what it calls a "the 90% economy". This "new normal" would be more fragile, less innovative and more unfair (inequalities will deepen). (For more read 'Coronavirus Lockdown XIII: Five steps to rebuild a post-COVID economy' )

For India to ignore all these danger signals would mean ruining millions of lives and the economy.