Economic Affairs Secretary Tarun Bajaj took out what seemed to be additional fiscal spending provided in the third stimulus package of Rs 1.01 lakh crore (capex, LTC vouchers and festival advances of Rs 73,000 crore) announced on October 11. He said there would be no change in the overall borrowing target of Rs 12 lakh crore fixed for FY21 earlier.

Drawing attention to this, economist Pronab Sen asserts that this package is not a stimulus package at all. He says all that the central government is doing is front-loading its fiscal expenditures and switching their use to both LTC vouchers and capex. With the borrowing limit intact, this would mean cutting down on other fiscal spending.

The earlier two stimulus packages of Rs 21 lakh crore (Pradhan Mantri Garib Kalyan Yojana of March 2020 and Aatmanirbhar Bharat Abhiyan packages of May 2020) added up to a fiscal spending of 0.75-1% of the GDP. With no further additional fiscal spending, the stimulus for economic recovery remains insignificant.

Taken together, the three stimulus packages would give an impression that the central government is banking on a natural V-shaped economic recovery even after the first quarter GDP (FY21) dropped down to minus 23.9% - the worst among all major economies during the same quarter.

Do the high-frequency economic indicators really give an indication of a natural V-shaped recovery?

What do high-frequency indicators tell?

This data shows the recovery witnessed after April 2020 (when the IIP general index touched a record low of minus 57.3%) took a beating in August (2020). Both the manufacturing and electricity IIPs, often quoted by government officials to assert a V-shaped recovery, turned the wrong way. 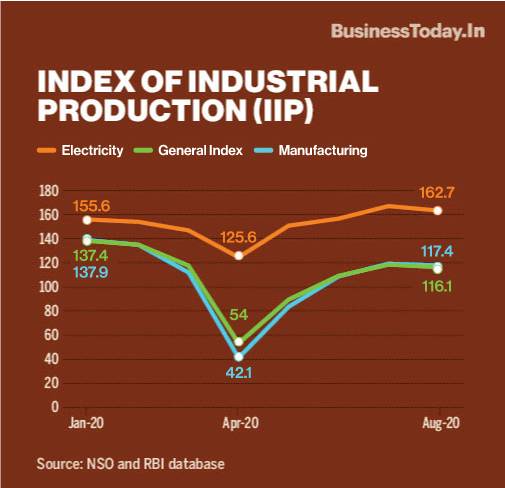 Will these graphs turn upward in September 2020? That would be known a month later.

In the meanwhile, more high-frequency data has been published.

The RBI's data on fortnightly credit outflows from the Scheduled Commercial Banks (SCBs) to the non-food sector demonstrates a progressively downward swing inAugust and September(fortnight ending on September 25). 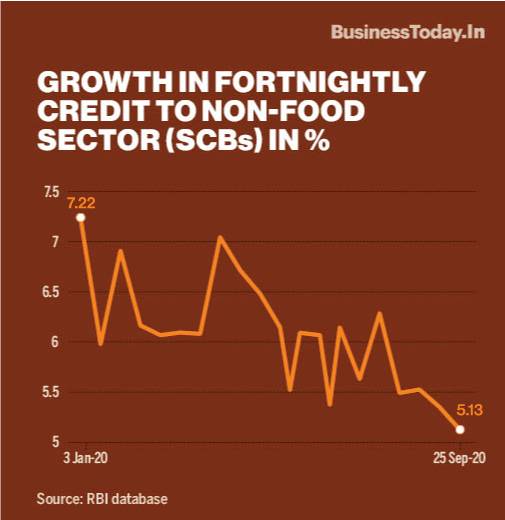 This high-frequency data (fortnightly) does not disclose sectoral deployment of credit. An SBI research paper released on October 8, 2020 analysed monthly credit deployment and made some shocking revelations.

It said in August 2020 the monthly growth in credit to industry witnessed a massive fall - of minus 426%. Infrastructure, which is part of industry, fell sharply by minus 314%. The agriculture sector witnessed a decline by minus12%. Personal loan and services were the exceptions, with positive growth.

For a better perspective on these high-frequency data of a limited period, here is the big picture.

The following graph maps annual growth in bank credits to the non-food sector and the GDP (2011-12 base, constant prices) to make better sense of the state of economy.

Note how far the economy is down even as the pandemic hit. 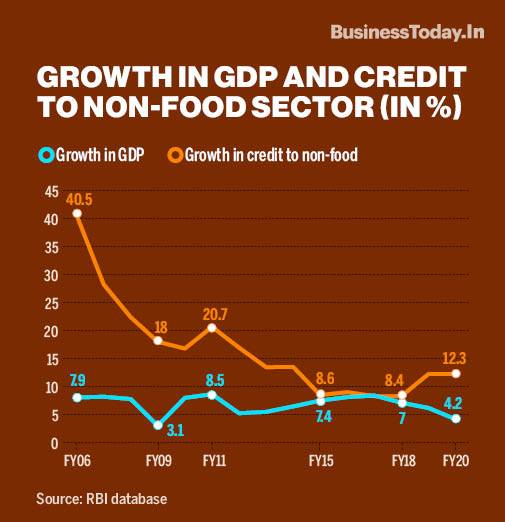 Another high-frequency data often cited to justify a V-shaped recovery is the consumption of petroleum products.

The graph below maps the consumption data in million tons (MT), as provided by the Ministry of Petroleum and Natural Gas. Consumption has improved since April 2020 but in September 2020 it was way down from the pre-pandemic January 2020 level when it was 3 million tons higher. More trouble has surfaced through another high-frequency data.

It said: "The data... revealed that deposits (savings, current and term) which increased to Rs 1.21 lakh crore in Unlock 2 (July 2020) havedeclined significantly during Unlock 4(September 2020)." The maximum decline is seen in savings bank deposits. Further, the consumer deleverage also declined in August "indicating the stress on household balance-sheets now emerging with gusto".

The paper did not explain the fall in savings deposits but wondered how much of the consumer leveraging was due to the lockdown/lack of business and how much due to consumers "maintaining a discipline in consumer behaviour".

Nevertheless, the meanings are very clear: the full impact of the massive loss of jobs and other livelihood sources caused by an untimely, unthinking and unplanned lockdown is being reflected in September 2020.

Here is yet another high-frequency indicator.

On all key questions, like general economic condition, employment, income and spending, the consumer perception shows that the current situation is progressively worsening from January 2020 to September 2020, with the only exceptions being price and inflation.

The following graph maps the rise in the percentage of consumers, stating that the current situation has "worsened". High-frequency data being relied upon by the government (except agriculture), like electricity demand, auto sales, steel demand, e-bills or the IIP and credit outflow etc. used here, are organised sector indicators, which say nothing about the unorganised sector contributing 45% to the GDP (as estimated during the 2011-12 rebasing of GDP).

Even the agriculture (unorganised sector) data presented in Q1 of FY21 is highly exaggerated since the output of two subsectors - livestock and forestry and fisheries accounting for 47% of GVA (in Q1 of FY20) - is based on "production targets", rather than actual production.

The bottom line: Relying on a natural V-shaped recovery may turn counter-productive.