Not only India's relief packages are grossly inadequate it is not even spending enough to revive demand in the crisis-hit economy; what is needed is clear: more fiscal spending, not "keeping the power dry" for future stimulus or unrealistic claim of a V-shaped recovery

While India's economic mismanagement in the past few years derailed its growth story, plunging the quarterly growth rate to minus 23.9% in Q1 of FY21 - from a high of plus 8.2% in Q4 of FY18, its fiscal policy too has been erratic.

The Centre's knee-jerk reactions to the shortfall in GST collection threatens the very tax regime and with it "cooperative federalism". It is finding new excuses to deny states their legitimate (statutory) GST compensation of Rs 2.35 lakh crore for FY21 and forcing them to borrow from the central bank RBI to meet the shortfall.

The latest justifications are: (i) states have parked Rs 1.8 lakh crore in treasury bills - short-term debt instruments issued by the Centre for 91 to 365 days - and (ii) states have borrowed only 2.75% of their GSDP against their limit of 3%. A Central government official likened this to "keeping the powder dry", an approach, the official disclosed the Centre has adopted in the time of serious crisis.

In the meanwhile, former RBI Governor Raghuram Rajan has warned that "to conserve resources for future stimulus" (keeping the power dry) is "self-defeating" and advised against unrealistic "claiming V-shaped recovery". India should, instead, think why in spite of providing 20% of GDP in fiscal and credit relief packages the US is still worried that it may not return to pre-pandemic GDP level by the end of 2021.

Describing India's Rs 21 lakh crore relief (9% of GDP) as "meagre; primarily free food grains to poor households; and credit guarantees to banks for lending to small and medium (SMEs) firms, where the takedown has been patchy", he sees the need for the government and bureaucrats "to be frightened out of their complacency and into meaningful activity".

Likening the current state of the economy to "a patient", Rajan writes ("The Alarm in the GDP Numbers") that help (relief) is needed now when the patient is fighting the disease, without which "the patient atrophies" and by the time the disease is contained, the patient is reduced to "a shell of herself".

Instead of focussing on boosting fiscal spending keeping deficit aside for now, India is embarking on a venture to expand its tax base in the midst of the crisis.

This is unlikely to help.

India has been tracking high-value transactions and scanning all data sources for years, routinely identifying large numbers of tax evaders also but does little about it. The Non-filers Monitoring System (NIS) is meant for this and has tracked annual information returns (AIRs), centralised information branch (CIB) data and TDS/TCS statements etc.

In 2019, a news report quoted tax authorities saying that 20.4 million cases of 'non-filers' had been identified during 2013-2017, of which 2.5 million were 'dropped filers' - who stopped filing returns. In 2016, another report quoted tax authorities as saying that 6.7 million potential non-filers carrying out high-value transactions in 2014-15 had been identified. (For more read "Taxing the untaxed III: Is govt oblivious to leakages in direct tax collection? ")

What happened to them is not known. No information is available in public to suggest effective action or improvement in tax collection.

A lot is indeed wrong with the Indian tax system.

First, it is a regressive one with high reliance on indirect tax, rather than direct tax as is the case with developed economies. Second, it does not tax agricultural income even when large amounts are routinely claimed as such by non-agriculturists for tax evasion and money laundering. (For more read "Taxing the untaxed I: Why govt should tax agricultural income ")

Third, India does not even have basic information on how many of those filing returns are actually paying tax and how much and whether all known high-net-worth individuals (HNIs) (dollar millionaires) are actually paying tax. Millions of self-employed, professionals and firms file self-assessment returns or pay presumptive tax, which carries huge risks of evasion. (For more read "Taxing the untaxed II: Why India's smaller taxpayers bear heavier burden ")

Fourth, there are a large number of shell companies and tax havens for profit-shifting and tax avoidance by domestic and foreign firms which are merrily operating without let or hindrance because India would not implement its anti-tax avoidance General Anti-Avoidance Rules (GAAR) framed in 2012. (For more read "Coronavirus Lockdown XII: Why the wealthy should be taxed more ")

Here is an interesting development from the US.

On August 23, tax expert Prof. Gabriel Zucman of Berkeley University presented his analysis of tax evasion by US firms in 2018.

He concluded that US firms booked 52% of foreign profits in tax havens, thereby avoiding tax. He also concluded that the Trump administration's corporate tax cut of 2017 did not work since profit-shifting to tax havens is "essentially stable relative to 2017".

The following graph, taken from his analysis, shows the trend in profit-shifting. He arrived at these estimates because the US government tracks and makes such data public.

India does not even track profit-shifting.

However, there is some assessment about it.

The World Inequality Lab published a global study, "The Missing Profits of Nations", in April 2020 which provides an estimate for 2015. Prof. Zucman is one of its authors.

The report shows domestic and foreign firms operating in India shifted $9 billion to tax havens in 2015. India may not figure in the list of corporate tax havens, but it certainly lets tax havens play a major role in its fiscal management.

The Department for Promotion of Industry and Internal Trade (DPIIT)'s latest data (May 2020) shows nine of the top 10 sources of FDI inflows to India are among the top 25 tax havens in the Corporate Tax Haven Index (CTHI) of 2019. The CTHI lists 64 such jurisdictions.

The graph below captures their share in the past three fiscals (percentage of FY20 marked). 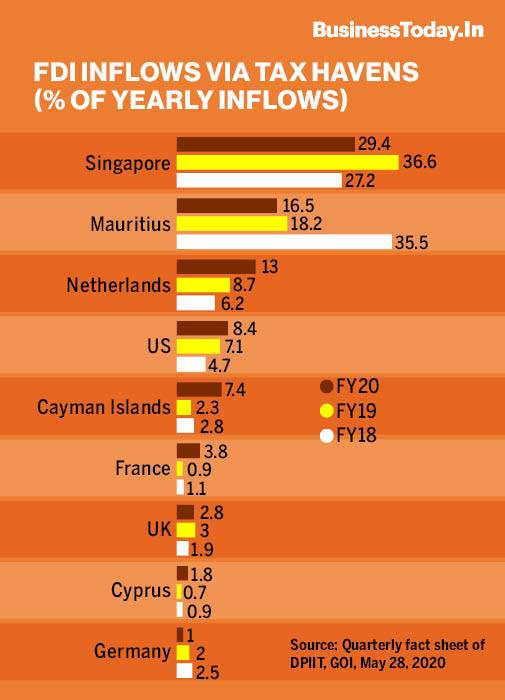 Three remarkable features of the above graph are:

First, FDI inflows from Mauritius have reduced after India renegotiated its Double Tax Avoidance Agreement (DTAA) with it in 2016 even though it is a partial one and not yet fully operational. (For more read "Taxing the untaxed VIII: How India and multilateral bodies are fighting tax avoidance ")

Second, the inflows from other tax havens have risen dramatically: Singapore, the Netherlands, the US, Cyprus and Cayman Islands.

Third, though India has renegotiated its tax avoidance treaty with Cyprus and Singapore, there is a jump in FDI inflows from there.

India has signed DTAAs with 96 countries, many of which are tax havens.

India's love with tax havens is reflected in FDI outflows too, as most such outflows are through them.

How much of all these constitute round-tripping and profit-shifting is not known.

The government does not track these things. Like the US, it should, especially since it gives incentives on FDI inflows and cut corporate tax by Rs 1.45 lakh crore for domestic firms amidst the prolonged economic slowdown in September 2019 when the quarterly GDP fell to 4.4%, consistently nose-diving from 8.2% in Q4 of FY18 (more than two years ago).

Last month the RBI disclosed what corporates did with the tax cut: "The corporate tax cut of September 2019 has been utilised in debt servicing, build-up of cash balances and other current assets rather than restarting the capex cycle. These underlying developments suggest that the appetite for investment is anaemic and in need of more reforms."

Lack of tax resources is showing in the Centre's inability to spend more to revive demand and boost chances of a quick economic turnaround, in addition to gross ineptitude reflected in not spending what it can.

The first four months of the current fiscal year are also marked by a 40% fall in net tax collection. 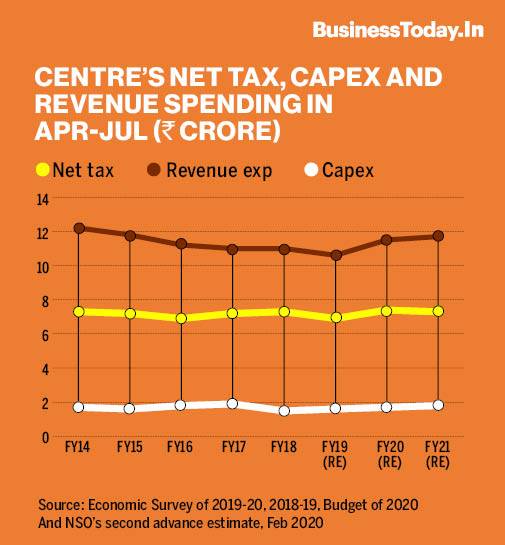 The problem is not new. India's tax base and collections have been very poor. There are several reasons for India's low tax base and collection.

It has a regressive tax regime in which indirect taxes play a major role: contributing an average of 61.5% of the total tax revenue in the past 10 years.

That is not the case with developed economies. In the OECD countries, for example, the average share of direct tax was 65% in 2017, the latest year for which data is available. India has traditionally been a low fiscal spending state compared to developed economies.

Comparative data for 2018 shows, the average government general spending of the OECD countries (data available for 28 countries) was 42% of their GDP. India's was just 18% (Centre and states together) in comparison.

Economists describe this ratio as "size of government".

The following graph shows the relative "size of government" of select OECD countries and India. The impact of a bigger size of government or, higher fiscal spending is known.

What India should be doing to overcome the crisis is clearly not only to stop prevaricating, spending far more but also change its fiscal policy paradigm.