That shadow banking was at the core of the financial sector meltdown that led to the Great Recession of 2007-08 is well documented and so is the fact that it remains big and powerful enough to cause serious financial crisis and yet, India and the US continue to promote it

The most shocking aspect of shadow banking entities world over is that these are run and promoted by governments and government-run entities to the detriment of regulatory oversights evolved over time to ensure financial stability.

The shadow banking system "consists of financial institutions that look like banks, act like banks, and borrow and lend like banks, but - and here's the important part - are not regulated like banks". That is how Prof. Nouriel Roubini of the New York University described it in his book 2010 "Crisis Economics", co-authored with Prof. Stephen Mihm of the University of Georgia.

Prof. Roubini is also known as "Dr. Doom" for accurately predicting that the US housing bubble would burst, plunging the world economy into recession. Many other economists too had forewarned the same, but they were ignored, even ridiculed.

The centrality of shadow banking to the 2007-08 financial crisis is well documented. Prof. Roubini and co-author narrated how complex, dodgy, and risky housing mortgage-backed securities were bundled, sliced, and diced into different levels of credit risks and transmitted around the world, spreading toxic assets. They concluded, like many others: "It's little wonder that the shadow banking system was at the heart of what would become the mother of all bank runs."

More than a decade later, nothing much has changed on the ground. Governments continue to promote them. Here are some examples, beginning with the US experience.

In September 2008, the US government took over Fannie Mae and Freddie Mac - two giant shadow banking entities operating in the US housing mortgage market.

Both Fannie Mae and Freddie Mac went down under their own mountains of debts. At the time of their takeover, their combined debt stood at $5.4 trillion, which was "equal to the publicly held debt of the United States" and their market share in new mortgage stood at 80%, declared the official statement of the Federal Housing Finance Agency.

It was the US Congress that had created both Fannie Mae and Freddie Mac to operate in the secondary housing mortgage market. They are also known as government-sponsored enterprises (GSEs).

Fannie Mae was set up in 1938 as a government entity and then handed over to the private sector in 1968. Freddie Mac was created in 1970 as a private entity to compete with Fannie Mae.

What does operating in secondary market mean?

It means Fannie Mae and Freddie Mac did not offer housing loans or keep housing mortgages (primary housing market) themselves. They bought housing mortgages from original lenders, packaged them into extremely complex securities, and sold them to pension funds, insurance companies, and hedge funds, thereby spreading the risks all around. All this happened completely outside the regulated banking system.

The official takeover statement mentioned "a significant supervisory concern" about Fannie Mae and Freddie Mac, their "deteriorating credit mortgage environment" (little scope of mobilising credit or cash from market) and concluded that these two "cannot continue to operate safely and soundly and fulfill their public mission".

These two are classic examples of public sector building private sector as well as inefficiency of the latter.

Ironically, Fannie Mae was created during the 1929 Great Depression-era - which had also been triggered by collapse of the US housing finance sector and market was unwilling to lend. Fannie Mae was supposed to fill this gap.

Seventy years later, in 2008, Fannie Mae was at the core of engineering the 2007-08 financial crisis and found no source of funding, forcing the US government to bail it out. It was a highly successful government-run entity for 30 long years before being handed over to the private sector in 1968.

Freddie Mac, too, was set up by the US Congress, in 1970, to operate in the same secondary housing mortgage market outside banking oversight. But this was created as a private entity to compete with Fannie Mae. It collapsed too and found the market unwilling to bail it out or restore equilibrium. The US government then stepped in at the cost of taxpayers.

Who else is paying for the huge $5.4 trillion debt of these private sector shadow banks?

India saw the collapse of its own leading shadow bank, Infrastructure Leasing & Financial Services Limited (IL&FS) in September 2018. The banking regulator RBI took over and initiated bankruptcy proceedings. At the time of takeover, its outstanding debt stood at Rs 91,000 crore, out of which Rs 57,000 crore was from banks, posing a high risk to derail the conventional banking system.

It is a public-private partnership (PPP) entity.

Here is a statement from its official website: "IL&FS was incorporated in 1987, initially promoted by the Central Bank of India (CBI), Housing Development Finance Corporation Limited (HDFC) and Unit Trust of India (UTI). Over the years, we have broad-based our shareholding and inducted institutional shareholders including State Bank of India (SBI), Life Insurance Corporation of India (LIC), ORIX Corporation Japan, and Abu Dhabi Investment Authority (ADIA)."

The official website also says that it is "one of India's leading infrastructure development and finance companies" and "pioneer of Public-Private Partnership (PPP) in India".

On May 30, 2019, the Serious Fraud Investigation Office (SFIO) filed a charge sheet in a special court in Mumbai, blaming the RBI for inaction even when the banking regulator had detected financial frauds in IL&FS Financial Services Ltd (IFIN), a subsidiary of IL&FS in 2015, 2016 and 2017, but allowed it to continue to operate.

Subsequently, the RBI clarified that it had given IFIN time until 2019 to clean up its books.

On July 22, the National Financial Reporting Authority (NFRA), a new regulatory authority set up in 2018, debarred IFIN's auditor former Deloitte India CEO Udayan Sen, for seven years and imposed a penalty of Rs 25 lakh for financial fraud, concluding that he "had been totally compromised". (For more read 'Rebooting Economy XI: Why are private companies so prone to financial frauds? ')

Here is something interesting about IL&FS's organisational structure.

The government provided lists of IL&FS's group companies to the National Company Law Tribunal (NCLT), which the latter reproduced in its interim order of March 12, 2020.

The government list named 302 IL&FS group entities - 169 incorporated in India and 133 outside India - a veritable industry of their own.

The government has not been found wanting to indirectly run shadow banking either.

One is the Power Finance Corporation (PFC), declared as "Navratna CPSE" by the government in 2007.

Its official website says: "Incorporated on July 16th, 1986, Power Finance Corporation Ltd. is a Schedule-A Navratna CPSE, and is a leading Non-Banking Financial Corporation (NBFC) in the Country... PFC is under the administrative control of the Ministry of Power... conferred the title of a 'Navratna CPSE' in June 2007 and was classified as an Infrastructure Finance Company by the RBI on 28th July 2010." 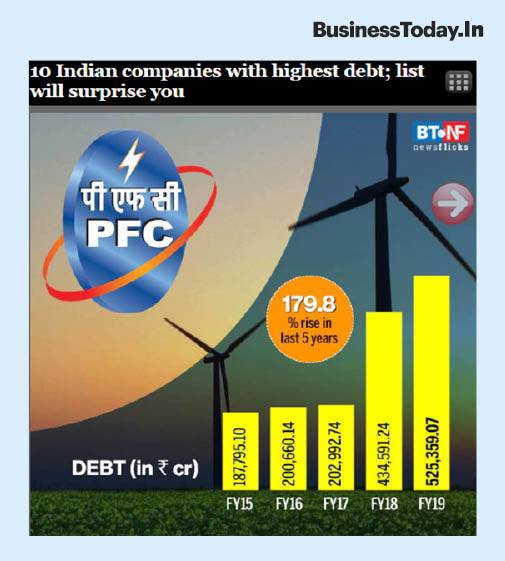 IL&FS and PFC are not the only examples. Dewan Housing Finance Corporation Ltd (DHFL), another NBFC, went down in 2019 under its mounting debts, defaulted, and was taken over by the RBI. The bankruptcy proceedings have also been initiated in this case.

That NBFCs are vulnerable and pose a serious threat to the economy ever since IL&FS went down has been recognised by the RBI's latest Financial Stability Report released on July 24, 2020.

This report said: "In the aftermath of the IL&FS crisis, NBFCs have been facing differentiation in market access and financial conditions, with only the higher rated entities able to raise funds. They have also started maintaining liquidity cover of two to three months, despite the higher costs. In the context of COVID-19, however, risks to the sector and consequently, systemic risks can intensify."

The RBI claims that it regulates NBFCs and hence even though these are classified as shadow banking by the global watchdog Financial Stability Board (FSB) set up in 2011, these (NBFCs) are "distinctly different" from shadow banks. The RBI is very much a part of the FSB mechanism.

The RBI's October 2017 Bulletin, on which the FSB's January 2020 report relied to analyse India's shadow banking sector, says: "NBFCs are, however, distinctly different from shadow banking entities in other countries. They are regulated by the Reserve Bank of India (RBI), with priority being assigned to calibrating regulations to harmonise them with those of the banking sector regulations to minimise the scope of regulatory arbitrage."

But the FSB's 2020 report made no such allowance or acknowledged it either. Its descriptions of the high-risk shadow banking segment, called Non-Banking Financial Intermediation (NBFI), perfectly matches the functioning of NBFCs as listed by the RBI itself in its December 2019 Report on Trends and Progress of Banking in India.

Nor the RBI's claim is backed by evidence in the case of IL&FS (SFIO report nailed it as mentioned earlier) or DHFL.

In fact, RBI Governor Shaktikanta Das admitted in an interview in December 2019 that "NBFC regulation is not as strong as (in) banks". Addressing a bankers' convention on July 11, 2020, he further declared that the RBI would extend principles of good governance to "large-sized NBFCs in due course".

There is nothing new in such statements and the "due course" has been very long in coming.

In 2014 the RBI issued a statement precisely saying what Das had recently said: NBFCs are not subjected to tougher rules applicable to banks and that regulations on NBFCs would be tightened.