Instead of addressing the precarity of workers, the central government is adding to it by re-hiring more and more retired employees on contract
Prasanna Mohanty

It is amazing how India's high economic growth in the past few decades has brought in a far higher unemployment rate (it touched 45-year-high in 2017-18), disappearance of good old full-time (permanent) decent jobs. Their place has been taken over by casual, contract and gig jobs which are low paying and without adequate protections.

India's high growth is also marked by a sharp rise in inequality of income and wealth in which those at the bottom of economic pyramid rapidly lost their share in the economy. (For more read "Unravelling GDP growth I: More growth is producing more inequality and misery " and "Coronavirus Lockdown XII: Why the wealthy should be taxed more ").

The economic lockdown has added to their precarity as millions lost their jobs and other sources of livelihood. After the new labour reforms were notified recently, some experts from the India Inc. wryly commented that the social benefits to workers were "deceptive" and these reforms would eventually create "a permanent cadre of insecure and temporary employees".

The labour reforms expand social security marginally while providing more flexibility to hire on contract and also fire. Such flexibility has in the past worked to the advantage of private businesses at the cost of workers, as several economic studies have found. (For more read "Rebooting Economy 31: Will new labour codes protect more workers or less?" & "Rebooting Economy 32: Wage code leaves millions of workers out in cold")

Instead of addressing the precarity of workers, the central government is adding to it by re-hiring more and more retired employees on contract.

The Centre is not only promoting contract employment (temporary) in private sector through new labour reforms, which have expanded the scope of its use and added Fixed Term Employment, but is doing so in its own domain.

On August 13, 2020, the finance ministry issued an office memorandum (OM) to fix remunerations for contract appointments of retired central government employees as consultants (highly skilled and domain experts) beyond the age of superannuation (60 years).

In 2017, the DoPT issued a similar OM for re-employment of retired government officials who had retired before 55 years of age and included Defence Force personnel/officers.

Such practices are disquietening for at least two reasons.

First, the central government has kept a large number of vacancies unfilled as a matter of routine even in the face of high unemployment earlier and now when the lockdown has rendered millions jobless.

6.84 lakh vacancies in central government when millions are jobless

The numbers were the same as the Rajya Sabha was told on November 21, 2019.

The overwhelmingly high percentage of vacancies in Group C (84% of total) indicates the government's apathy towards those at the bottom of the economic pyramid.

The Rajya Sabha has been repeatedly told that the UPSC, SSC and Railway Recruitment Board had made "recommendations" to recruit 1.35 lakh (19.7% of vacancies) during 2019-20. There is no sign of actual hiring until now.

Not filling vacancies is not new

In the meantime, a new finance ministry circular of September 4, 2020, caused further disquiet by asking all central government ministries and departments to shed posts of consultants, cut costs, and also put "a ban on new posts, except with the approval of the Department of Expenditure". Later the ministry clarified that this didn't amount to a ban on filling vacant posts.

Assurances regarding recruitments make little sense or difference when millions don't have jobs, either because the lockdown forced millions out of it or the earlier years of high growth which didn't produce proportionate jobs.

While the UPA era (2004-14) was marked by job-less growth, the NDA II era (since 2014) has been marked by job-loss growth - first the economic misadventures like the demonetisation and GST which caused a massive job loss and then the sudden, untimely and unplanned economic lockdown when virus count was too low (about 650).

In the meanwhile, the central government has admitted to gross apathy and abdication of its duty by telling the Parliament (during the monsoon session of September 2020) that it had no data on migrants' job loss or their deaths while walking home during the lockdown or how many MSMEs and start-ups shut shop due to its unwarranted lockdown on March 25.

Private business information portal CMIE reported on September 7, 2020, that 21 million "salaried" (regular and formal sector) jobs were lost due to the lockdown. The regular wage/salaried group of workers are the most privileged ones in terms of job and social security but constituted 23.8% of the total workforce during 2018-19, as per the PLFS of 2018-19.

The second disquietening aspect of the central government's re-hiring of retired officials on contract is the rapid growth of temporary (contract and casual) workers in the government sector.

43% government jobs were temporary (casual and contract jobs) in 2013

The central government has stopped publishing data on organised sector workers after 2012, reflecting a general apathy to the state of employment.

As a result, successive Economic Surveys, right up to the 2017-18 one released in 2019 carries the same old set of data on organised sector employment data up to 2012. The Economic Survey of 2019-20, released in January 2020, discontinued publishing even that.

Those data never revealed how many in the organised sector (government or private) were temporary - casual or on contract. There is no such data with the government.

Here is a private assessment, by the Indian Staffing Federation (ISF), the apex body representing the staffing industry, published in 2014. It traces temporary workers in central government, state governments, PSUs, and local bodies.

Since no direct data is available, the ISF collected data from government functionaries and secondary government databases like various surveys (ASI and NSSO) and various government reports to estimate the size of temporary workers, which it defined as casual and short-term contract workers (less than 3 years) with or without written contracts. It counted all contracts of 3 years or more as "permanent".

It found that the overall hiring in the government sector is on a decline and "temporisation" is increasing.

Some of its revelations were shocking.

The following extract from this report shows distribution of casual and fixed short term contract (FSTCs) of less than 3 years. 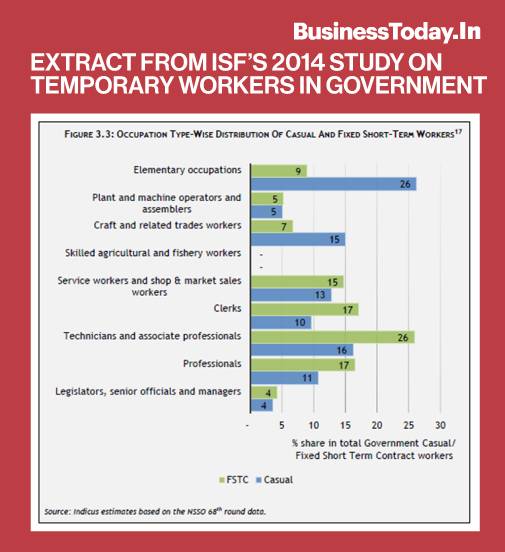 As the extract shows, high-skilled professionals and teachers constitute a significant part of the temporary appointments in government - casual and short-term contract. Architects, engineers, teachers in schools and higher education institutions are some of them.

In a country with more than 50% population or 659 million people living below the World Bank poverty line for a low-middle income country ($3.2 of per capita per day living expense) even before the pandemic struck and millions more joining them after losing their jobs to the lockdown, the central government's approach to employment is shocking to say the least.

Part II of the article will look at more data on the subject and academic studies showing how growth in temporary/informal employment hurts both workers and economy.