India's national agriculture policy is 20 years old and its response to farm crisis continues to be ad hoc, primarily focused on letting private players provide infrastructure and better remuneration to farmers who have consistently failed to deliver

Now that the central government has entered into a dialogue with the protesting farmers over new farm laws rushed through the pandemic lockdown behind their backs (and dismissing all objections raised during a brief discussion in Parliament), here are some key issues that need immediate attention.

'Market efficiency' is a myth

Government officials and experts don't fail to remind the farmers that they get huge subsidies.

Prof. Ashok Gulati, former chairman of the Commission for Agricultural Costs and Prices (CACP), wrote that Punjab farmers benefitted the most: Punjab government budgeted (for FY21) Rs 8,275 crore for free power and the central government provided Rs 5,000 crore (in FY20) for fertiliser subsidy. Taken together, he wrote, each Punjab farmer received Rs 1.22 lakh as subsidy in FY20 (total of Rs13,275 crore for 1.09 million farmer families).

Here is a table from the Centre for WTO Studies of Indian Institute of Foreign Trade (IITFT) published in June 2020 ("Revisiting Domestic Support to Agriculture at the WTO: Ensuring a Level Playing Field") that shows India gives the least farm subsidy. 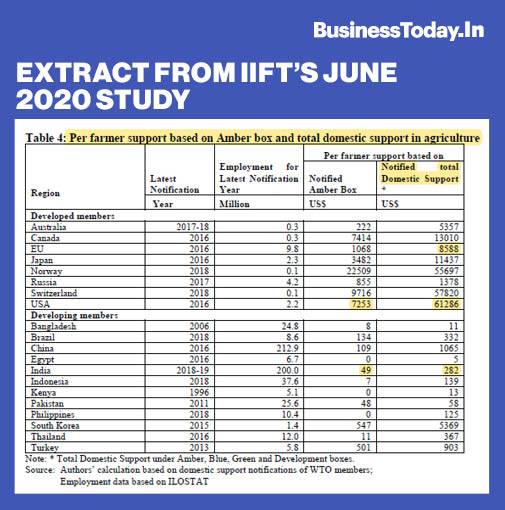 If the free-market champions like the US and EU are so generous in their farm subsidy, it only indicates that "market efficiency" is a myth and that farmers need support and protection from such efficient free-markets.

Besides, a large part of the benefits meant for farmers are cornered by corporates and diverted for non-farm purposes.

The RBI's "Report of Internal Working Group to Review Agricultural Credit", released in September 2019, said several states availed agri-credits (given at 7% interest with 2% interest subvention) far higher than their entire agri-GDP: Kerala (over 180% of agri-GDP), Tamil Nadu (170-180%), Telangana, and Punjab (over 100%).

Where did that money go? The answer is not known yet.

An RTI query had revealed in 2018 that banks gave Rs 58,561 crore of agricultural loans to 615 accounts in 2016 (more than Rs 95 crore each on average), indicating industries rather than farmers got these loans. Corporates also benefit from exemption to agriculture tax. A 2016 analysis based on Lok Sabha answers had shown that the top 10 claimants for tax exemption in 2013-14 were corporate entities; the top two were selling seeds to farmers (Kaveri Seed and Monsanto India).

Should companies selling seeds to farmers or running agri-business be treated at par with farmers (85% of which are small and marginal ones with less than 2-hectare land) for tax exemptions and cheap loans?

India has taken several steps to promote private investment, starting with the National Agriculture Policy of 2000, but nothing has worked. 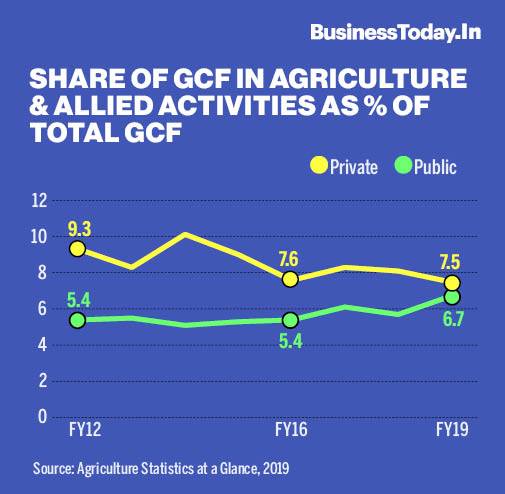 The RBI's "Report of Internal Working Group to Review Agricultural Credit", mentioned earlier, had said the share of short-term loans (for cropping purposes) had soared due to the interest subventions that started in FY07, but that of the long-term ones (investment credit) had fallen. 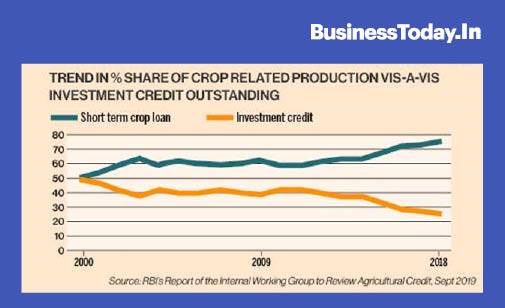 Bihar's case is relevant here since it dismantled APMC mandis (total of 1,794 mandis in all) and MSP-linked procurement in 2006 - at the core of the current farmer agitation.

The field was thus left entirely for private players.

By 2013, the "Final Report of Committee of State Ministers, In-charge of Agriculture Marketing to Promote Reforms" was reporting that (i) "the present system (dismantling of APMCs) in Bihar is not in the interest of farmers and needs orderly marketing" (ii) Bihar government is "making efforts for alternative development of agriculture marketing" and that Rs 33 crore had been sanctioned to set up Terminal Market Complex (TMC) at Pothai in Patna.

The first item in its "agendas for policy actions" left nothing to imagination: "Despite the abolition of the Agricultural Produce Market Committee (APMC) Act in 2006, private investment in the creation of new markets and strengthening of facilities in the existing ones did not take place in Bihar, leading to low market density. Further, the participation of government agencies in procurement and the scale of procurement of grains continue to be low. Thus, farmers are left to the mercy of traders who unscrupulously fix lower prices for agricultural produce that they buy from farmers. Inadequate market facilities and institutional arrangements are responsible for low price realisation and instability in prices."

No wonder, during the October-November 2020 Bihar elections, Bihar farmers demanded that they too should get APMC mandis and MSP-based government procurement for better income. But the protesting farmers are being told that dis-incentivising MSP-based procurement at APMC mandis is not good for them.

The government has been promising doubling farmers' income and sold the three new farm bills as for their benefits. One of these three removed stock limits placed by the Essential Commodities Act of 1955 and provided that only in certain extraordinary situations, including sharp price rise, the supply of food items would be regulated.

A day before the ordinance was passed by the Parliament, the government banned onion exports because of rising prices, even though it hadn't gone up to merit action under the new law.

A few days later, former agriculture secretary Siraj Hussain (co-author Jugal Mohapatra) presented data to show how the trends in the retail price of onion "did not justify" the ban.

Banning the export of onion deprived farmers of a good chance to earn.

The study estimated that during 2000-2016, Indian farmers had lost Rs 45 lakh crore in income or Rs 2.65 lakh crore every year at 2017-18 prices due to such trade practices and supply regulations. He later described this "nothing short of plundering of farmers' income".

Just before the 2019 general election, the government responded to the earlier farmers' protest by directly transferring Rs 6,000 a year to them under the PM-Kisan scheme. It did not include farm labour or tenant farmers - the poorest of the lot.

Landless farm labourers constitute 55% of the total agricultural labour (144.3 million out of 263 million agriculture workforce); tenant farmers contribute significantly to output (some estimate suggests more than 40%) but they get no government support.

It is the farm sector that remains the only silver lining in the recession-hit economy. Surely a help to farm labour and tenant farmers would go a long way in reviving the economy.

In the meanwhile, the central government has initiated two moves enraging the farmers further.

One is a threat to power subsidy.

In April 2020, the Centre circulated draft Electricity (Amendment) Bill of 2020 to centralise power sector regulations which propose, among others, Electricity Contract Enforcement Authority (ECEA) as the "sole authority and jurisdiction" on contract in the sale, purchase and transmission of electricity, except tariff.

But for tariff, it proposed state commissions "to determine tariff for retail sale of electricity without any subsidy" and that subsidy, if any, "shall be provided by the government directly to the consumer". Further, it proposes privatisation of power distribution (discoms) run by state governments through a "franchisee" system.

The farmers want this bill to be junked too as it threatens to take away the power subsidy.

In the meanwhile, fertiliser subsidy continues to be given directly to fertiliser companies, not farmers. A pilot for cash transfers that started in 2016 ended up maintaining the status quo - continuing to give subsidy amount to fertiliser companies infamous for promoting the practice of "gold plating". There is a change though. Payment is now made "on the basis of actual sales made by the retailers to the beneficiaries through Point of Sale (PoS)".

Post-PM-Kisan scheme directly transferring cash to farmers since 2019 (Rs 6,000 a year in three installments), is there any justification for this?

The second move is one more ordinance, "The Commission for Air Quality Management in National Capital Region and Adjoining Areas Ordinance, 2020" on October 28, 2020, notified amidst a hue and cry over air pollution and the role of stubble burning in it. This too was unilateral and without anybody's knowledge.

It lists stubble burning as a factor for air pollution and provides for 5 years of imprisonment and/or Rs 1 crore fine for it.

Punjab farmers have not only bailed out India from the food scarcity of 1960s and 1970s, but they were also asked to grow paddy (the stubble of which is burnt because it can't be used as fodder or roofing as is done in Odisha, Bihar, West Bengal, Chhattisgarh and elsewhere), the showing of which has been delayed by a law to protect water table, which shortens the window for preparing soil-bed for next crop (Rabi), further incentivising stubble burning. Besides, mechanised harvesting leaves a huge amount of stubble. (For more read "Rebooting Economy 40: Why Punjab farmers burn stubble? ")

There are many other issues bedevilling farmers and agriculture that need attention and long-term planning but that would be possible only when India develops a national policy on agriculture. The last policy was adopted in 2000, 20 years back.

Until then ad hoc and half-measures will remain the order of the day.