Income of the working population needs to be raised through significant increase in urban and rural wages to revive consumer demands.
Prasanna Mohanty

Last week, the Britannia Industries' managing director sent shockwaves, so to speak, by remarking that people were thinking twice before buying even a packet of biscuit for Rs 5. Another leading biscuit maker, Parle Products, joined in earlier this week to say that it might have to lay off 10,000 workers. All this is because consumer demand has collapsed.

This phenomenon is not limited to the FMCG segment by any stretch of the imagination. The auto industry has been in turmoil for quite some time with some of the leading players screaming aloud about inventory pile-ups, suspension of production and job cuts by the thousands.

None of this, however, should come as a surprise. The telltale signs have always been there but little attention was paid.

Take the industrial production. The index of industrial production (IIP) - which measures production in the areas of mining and quarrying, manufacturing and electricity - has remained very low. Growth in manufacturing IIP, which accounts for 77.63% of the IIP (base year 2011-12), has remained confined to a far lower band of 2.8% to 4.8% (an annual average of 4%) in the past seven years between 2011-12 and 2018-19.

This is not only way below the GDP growth for all these years but it is substantially lower than that of the manufacturing IIP for the previous six years between 2004-05 and 2010-11 (base year of 2004-05). Then it averaged 10% annual growth.

Not just that, the capacity utilisation of the manufacturing units, an indicator of demand which shows productive capacity being used for generating goods and services, has also remained low, reflecting low demand for manufacturing goods. What these three graphs demonstrate is that both manufacturing production and demand for it have been severely hit.

Therefore, there is little reason for the manufacturing industry to expand capacity.

This is also reflected in the growth of capital goods. Import of capital goods does not reflect a rosy picture either, further establishing that little capacity expansion activity is going on in the economy.

The quantum import index has stagnated for the past seven years as graph 5 shows. This state of the Indian industry is further reflected in the growth of bank credits to industry and capital formations.

The following graph traces the growth in bank credits to the non-food sector and its industry component for the past decade (the non-food sector comprises of industry, agriculture and allied activities, services and personal loans), showing a drastic fall, after peaking in 2010.

For the non-food sector as a whole, the growth peaked at 16.8% in 2009 and registered 12.3% in 2019. Detailed analysis shows that the services and personal loans segments are playing a bigger role in keeping the picture a lot healthier - rather than the industry. 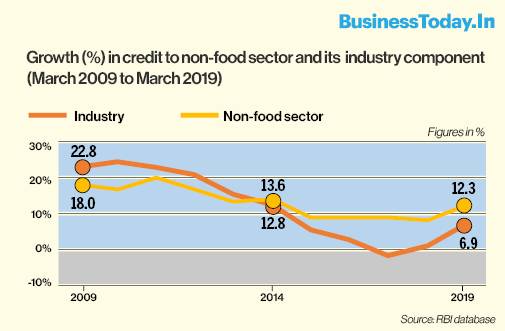 The level of investment in the economy, reflected in the gross fixed capital formation (GFCF), also shows a similar trend.

What all the data presented through seven graphs show is that there is just no demand for manufacturing products in the economy.

And this fall in consumer demand can be attributed to a drastic fall in the wages of the working population. The SBI's research shows that both urban and rural wages, which were growing in high double digits until a few years ago, have fallen to single digit, pulling down the real per capita net national income (NNI). 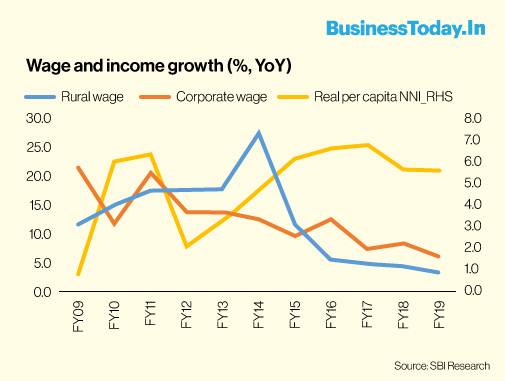 The implications are very clear: Income of the working population needs to be raised through significant increase in urban and rural wages to revive consumer demands - not only for the FMCG goods like biscuits but also consumer durables like autos.