Trump vs Triumf: What India can do to salvage Indo-US ties

Clearly, India and the US have come a long way from the trauma and blunders of the 1971 War. The US needs India to contain China and New Delhi realises that without a multi-pronged thrust, the dragon will grow into a hulking threat across the Himalayas. 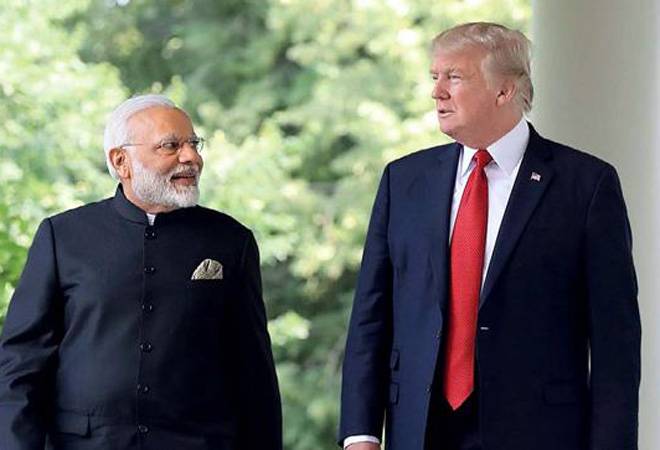 Today, India and the US are friendly allies. In fact, in a 2012 Pew survey of 21 nations, Indians seemed most favourably disposed towards the US with only 12 per cent saying they had an unfavourable opinion of the US.

During the 1971 War, US Secretary of State Henry Kissinger, angered by the Indian military's clinical demolition of the Pakistan armed forces, called Indians "such bastards". His boss President Richard Nixon described Indian Prime Minister Indira Gandhi as "that bitch". Again, in 2011, an American diplomat delivered a lecture in Chennai described Indians as "dirty and dark".

Yes, a large number of Americans are racist and the overwhelming majority of the country is possessed by an evangelistic zeal to conquer the world. But the US is no more an adversary as it was during the Cold War when it is believed Nixon contemplated nuclear bombing India cities to prevent the Indian Army from liberating Bangladesh.

Today, India and the US are friendly allies. In fact, in a 2012 Pew survey of 21 nations, Indians seemed most favourably disposed towards the US with only 12 per cent saying they had an unfavourable opinion of the US.

After the US amended its Arms Export Control Act to expedite arms trade and technology transfers between the two countries, there has been a flurry of activity in India's defence sector, which is contributing to Make in India and a more technologically advanced indigenous defence industry. This is of course in parallel with other critical joint defence ventures with Russia, France and Japan, but the cooperation with the US involves a strategic dimension.

India and the US have also signed the COMCASA agreement which allows live datalink between Indian and the US defence forces. This has huge implications for joint ties because it shows that the armed forces of both sides implicitly trust each other.

And that's not all - both sides have also operationalised the Logistics Exchange Memorandum of Agreement (LEMOA) and the Helicopter Operations from Ships Other Than Aircraft Carriers (HOSTAC) programme. The India Strategic Trade Authorisation Tier 1 status enables free flow of advanced technology from the US. Clearly, there is no other military with which India has such wide-ranging engagement.

An example of the strategic angle is how the Japanese, Indian and US Navies jointly track the movement of Chinese submarines. The military satellites, aviation assets and warships of the three countries play tag as these Chinese vessels pass through South China, exit the Straits of Malacca chokepoint and enter the Bay of Bengal and on to the Bay of Bengal. Chinese warships are tailed, watched and spied on by these three navies 24/7.

Unlike India's military focussed ties with Russia, the US-India relationship is not of a one-dimensional nature. It also spans the economic sphere plus there is the Indian diaspora in the US estimated at three million and growing. India's information technology success story is primarily built by Indian software workers and entrepreneurs who trained and worked in the US.

India's IT services exports to the US alone were an estimated $63.51 billion in 2018. In contrast, in the same year, India's total annual exports to Russia amounted to just $3.23 billion.

Clearly, India and the US have come a long way from the trauma and blunders of the 1971 War. The US needs India to contain China and New Delhi realises that without a multi-pronged thrust, the dragon will grow into a hulking threat across the Himalayas.

Beijing has lost none of its expansionist appetite and despite its size, it hankers for bite-sized territories from far smaller neighbours such as Vietnam and the Philippines. Against India, Beijing has propped up the jehadi neighbour next door and it provides with weapons and cash as a check on India.

In February when Indian Air Force warplanes entered Pakistani air space and pounded the living daylights out of the terrorist camps in Balakot in Khyber-Pakhtunkhwa, the US looked the other way. It was a virtual thumbs up to India's hegemony in the region.

You could almost hear Donald Trump saying, "Why didn't they also take out Kahuta!" In an earlier era, there would have been rounds of condemnation by the State Department, White House and other Beltway flunkies.

With the US pressuring India to walk out of the S-400 deal with Russia, what are New Delhi's options? First up, it is incontestable that India requires the powerful missile defence system to strengthen its antiquated air defence network.

The five batteries of the S-400 that have been ordered will act as an interim measure as India's own long-range air defence systems are in the development stage.

However, no weapon, no matter how powerful and capable, can be allowed to impact ties. India must not make the S-400 a cause celebre. This is the mistake that the puffed up Recep Tayyip Erdogan is making. The Turkish President is literally prepared to bail out of NATO - a military alliance that it has been a part of for over six decades - due to American pressure to cancel his S-400 deal with Russia.

In Turkey's case, the US has a legitimate case that Russian military advisors - who will accompany the S-400 batteries and stay on for months if not years - could scoop up data on the performance of the American stealth fighter, the F-35.

However, there won't be an F-35 in a 1,000 km radius from India's land borders where the five S-400 regiments will be stationed. This indicates that at least in India's case the US pressure is aimed at denying market space to Russia.

The US has reportedly offered the Patriot surface-to-air missile defence system and the Terminal High Altitude Area Defence (THAAD) system if India kills the S-400 deal. However, the Patriot has been overhyped and its effectiveness is limited as a number of Middle Eastern allies have found out.

The ease with which Houthi rebels fire missiles into Saudi Arabian cities is not only an indictment of the poor combat capabilities of the Saudi military but also the inability of the US supplied Patriots to stop these missiles from raining down.

Also Read: Pompeo to boost US' 'incredibly important' ties with India during visit to New Delhi

Since the US doesn't have an equivalent system to offer, scrapping the deal will leave India with a hole in its air defences. In this backdrop, when Indians sit across the table from visiting US Secretary of State Mike Pompeo and his team, they should get their pound of flesh.

One of the reasons why Russia, China and North Korea are squirming of late is the US plans to install THAAD in South Korea. Clearly, if this wasn't a game changer, the three countries wouldn't be accusing the US of ratcheting up the arms race.

But instead of buying THAAD batteries, India should acquire the technology which can be grafted on to its own missile defence systems. As the ASAT test proved recently, India has an advanced missile development programme and the infusion of American technology will give agencies such as the DRDO the ability to make a quantum leap.

Necessity is the mother of invention, and India has been its biggest proponent. It survived decades of virtual technology apartheid which was erected specifically by the West to stop India's rise as a military and nuclear power.

However, as a former ISRO chairman said, because of Western sanctions that ran for decades, India literally reinvented the wheel and the result is that today India can produce the smallest gasket to the largest rocket.

The loss of the S-400 could thus become a blessing in disguise for India. Since India is buying five systems outright for $5.4 billion - and there is no technology transfer involved - buying THAAD technology for perhaps half the amount could give India an indigenous missile defence weapon that it could one day export to friendly nations.

The Russians are emotional people and there will certainly be a blowback. They have exhibited vindictive behaviour on at least two similar occasions. In 2011 when India scratched the MiG-35 from the MMRCA competition, the Russians took it badly.

In late April 2011 when the Indian Navy's three most modern destroyers, INS Delhi, INS Ranvir and INS Ranvijay sailed into the Russian port of Vladivostok for joint exercises, the Russian ships were nowhere to be seen.

According to the Russian Navy brass, their ships were assisting the Japanese with rescue operations at the Fukushima nuclear plant. This is as big a snub as it gets. You don't invite your friends halfway around the world and tell them to go fishing in the Pacific.

But what literally rubbished Russia's reputation in India was the Gorshkov deal. The Russians had initially quoted around $750 million to refurbish the carrier for the Indian Navy. But then they jacked up the price to nearly $3 billion and when the Indian side balked the Russians issued a threat: "Fine, we'll keep the boat, and we have your money too."

So India can possibly expect a few Russian walkouts from ongoing programmes - the indigenous aircraft carrier which is in the final stages, BrahMos Corp and nuclear submarines. However, enough indigenisation has been achieved for India to go solo from here.

Secondly, India is the only country that refused to poach Russian military and aerospace scientists when the Soviet Union crumbled. South Korea, for instance, absorbed hundreds of Russian scientists who propelled the country to the tech stratosphere. Such examples of fake Vasudeva Kuttumbakam are not to be repeated and India must hire Russian freelancers to work on unfinished projects.

Many observers fear that Russia could spite India by ramping up ties with Pakistan. But that is already happening. Russian state media such as RT - or Russia Today - routinely broadcasts highly negative news about India while showing glowing accounts of Pakistan. It's like the Cold War flipped.

At any rate, Pakistan's ability to buy Russian weapons is severely limited by the parlous state of its economy. Even if Moscow offers Islamabad a few advanced S-300s or similar tier-2 weapons free of cost, it will have to face the embarrassment of its systems being knocked out by India in the opening hours of war. The prime example is Israel which attacks Syria almost on a weekly basis, destroying the country's latest Russian supplied weapons.

For decades, India remained confined to the South Asian binary, instead of breaking out like a true leader as much smaller Japan and South Korea did.

With the demise of Pax Americana, policy wonks Richard Fontaine and Daniel M. Kliman describe India as a "global swing state". Such a state possesses a large and growing economy, occupies a central position in a region or stands at the hinge of multiple regions.

In an interview to the Seattle-based National Bureau of Asian Research, they say alliances with swing states can "deliver a geopolitical pay-off" because the choices these nations make may "decisively influence the course of world affairs".

Both Pompeo - and his Russian counterpart Sergey Lavrov - should be reminded of this new reality.

Prepaid cards: The smarter mode for gifting, shopping and saving