It has launched many innovative products which are being introduced in the Indian market for the first time.

Nandagopal Rajan
LG Electronics India has launched a host of home appliances to kick off the festival season, among them many innovative products which are being introduced in the Indian market for the first time. 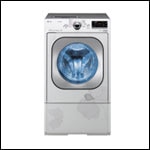 LG is bringing in its more intensive 6 Motion and quitter Inverter Direct Technology in the new range of washing machines, which also include world's first steam washing machines. Steam, LG claims, will remove allergen, mites and residual detergent from the clothes. The new range will also have shoe care to dry and sterlise footwear. The company has also focused on increasing the capacity of the machines, which Rajeev Jain, Business Head, Home Appliances, said has been identified as a top customer requirement. The new range will be priced between Rs 31,690 and Rs 1,24,990.

The company has also entered the water purifier segment with what it calls a total solution provider. The device has a five-stage RO system with a built-in compressor to provide chilled water when needed. The water purifier will cost Rs 34,090.