The biggest competitor of the Jio GigaFiber in the Indian market is Bharti Airtel with its Airtel V-Fiber broadband service that offers lightning-fast speeds of up to 100Mbps. 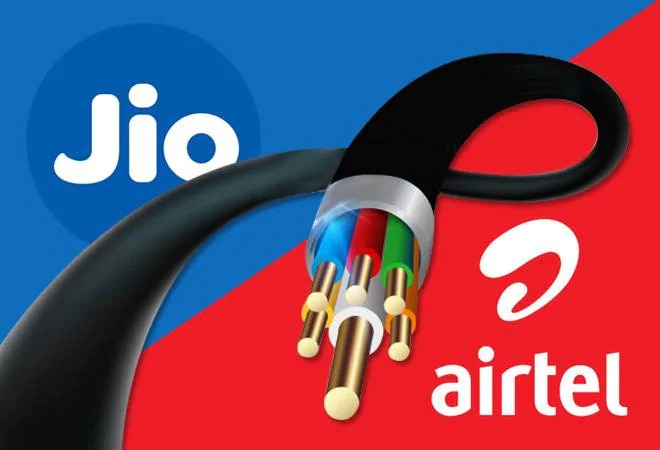 Jio GigaFiber is expected to change the Fiber-To-The-Home (FTTH) broadband industry just like it changed the mobile internet space and brought down the prices in India.

Reliance Jio has made a big entry into the fixed-line broadband services in India and its customers will be looking for cheaper and more affordable plans from the telecom provider. Jio GigaFiber is expected to change the Fiber-To-The-Home (FTTH) broadband industry just like it changed the mobile internet space and brought down the prices in India. Up until now, Reliance Jio has been testing its FTTH services via Jio GigaFiber Preview Offer that was announced last year.

The impending launch of Jio GigaFiber has already shaken the existing broadband players in India. Some have revamped their broadband plans accordingly. Let's take look at what Reliance Jio's announced today and compare it with competitors' offerings.

Reliance Jio GigaFiber: Reliance Industries Ltd (RIL), in its 42nd annual general meeting today, announced the launch of Jio GigaFiber services. The Jio GigaFiber's base plans will start at 100 Mbps and can go up to 1 Gbps with prices ranging from Rs 700 to Rs 10,000 depending on the usage. Customers opting for Jio Forever plan for Jio GigaFiber will also get an HD 4K LED TV and a 4K set-top box free. Additionally, GigaFiber subscribers will be able to make voice calls from home to any Indian telco for free. The international calling tariffs will also be lower. Jio GigaFiber will also include subscriptions to several top premium OTT applications. Jio also announced a partnership with Microsoft for cloud datacentres.  In return, Reliance will also promote Office 365 to more companies. JioFiber commercial rollout will begin on September 5, 2019.

Airtel V-Fiber: The biggest competitor of the Jio GigaFiber in the Indian market is Bharti Airtel with its Airtel V-Fiber broadband service that offers lightning-fast speeds of up to 100Mbps. In Delhi, Airtel's monthly plans start from Rs 799 with internet speeds of up to 40 Mbps and 100GB broadband data. The 100 Mbps plan is priced at Rs 1,099 per month with 300GB broadband data. The company also has Rs 1,599 and Rs 1,999 plan with speeds up to 300 Mbps and 100 Mbps respectively. The Rs 1,999 plan does not come with a data limit.

Hathway: Hathway has revamped its unlimited plans and offers faster speeds and more data to take on Reliance Jio's GigaFiber. In Delhi, the company has a SuperThunder 150 Mbps plan with a FUPP limit of 200GB. The 100 Mbps plan of the Hathway is called Superstorm 100 and comes with a 130GB monthly FUP limit. The cheapest Hathway plan is called Storm-1 5 Mbps priced at Rs 1,947 for 3 months. It has a monthly FUP limit of 25GB.

Spectra Broadband: Spectra offers speeds of 1 Gbps to its subscribers for Rs 885 per month. On monthly subscription of the Sepctra Fastest plan, the subscribers can enjoy the high speed with a data limit of 500GB per month and do not charge installation or security charges on half-yearly and annual subscription plans. The company also offers 500 Mbps Spectra Faster plan and 250 Mbps Sectra Fast for Rs 833 and Rs 799 respectively.

Tata Sky Broadband: Tata Sky Broadband has a basic Rs 590 unlimited data plan in Ahmedabad with a validity period of one month, three months and six months. It offers speeds up to 16 Mbps, a free router, data rollover and safe custody options. There is also a Rs 700 plan with 25 Mbps data speed and Rs 800 with 50mbps speed. Tata Sky offers Rs 1,100 and Rs 1,300 unlimited plan with speeds up to 75 Mbps and 100 Mbps download speed.