Voltas VAP47TWO air purifier review: Right from the power button to speed control, and auto mode to child lock, touch buttons are well labelled and lit in green when in use 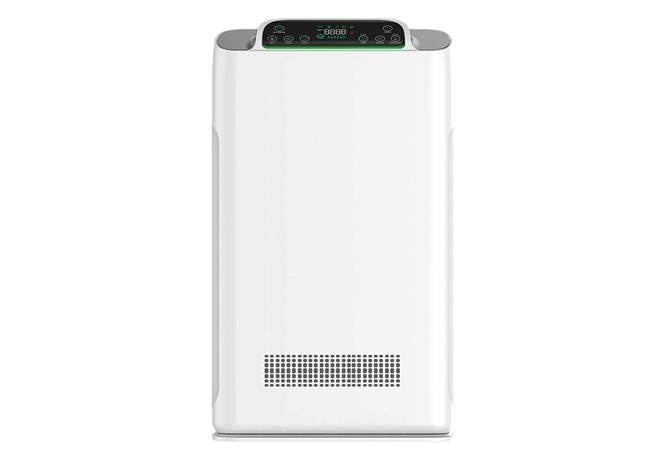 Voltas VAP47TWO air purifier review: Addition of app support would have been a welcome addition

Voltas VAP47TWO air purifier review: Increasing air pollution across northern India and many cities across the country has paved the way for air purifiers and anti-pollution masks. While Xiaomi, Philips and Honeywell are some of the most popular brands in the country, Voltas Air Purifier VAP47TWO priced at Rs 21,990 is also a fully loaded performer.

The Voltas Air Purifier VAP47TWO has a neat, simplistic design in a white matte finish. It does look premium but at the same time it is likely to get dirty quickly. The machine sucks impure air from the front sides and releases the clean air from the rear top. The control panel on the top is pretty neat and nifty. Right from the power button to speed control, and auto mode to child lock, touch buttons are well labelled and lit in green when in use.

Going a little into the detail, there is UV sterilize button on the top left and a power button on the top right. Right below the two are two sets of three buttons each for auto, speed and sleep on the left, and timer, ionizer and child lock on the right. In between is the digital display that shows real-time PM 2.5 level in the air, speed and some other necessary details.

It is also accompanied by a remote with necessary controls such as power on, UV Sterilize, Ionizer, lock, unlock, speed, auto to name a few. The remote has a good range as I was able to control the air purifier from a distance of over 12 feet. With some of the brands embracing the Internet of Things, this one doesn't have a compatible app for the purifier to be controlled from a smartphone.

To start using the air purifier, I had to first unlock the front panel of the machine to remove the packaging of the filters. The panel had to be opened by pressing the middle of the front panel. Directions to do the same have neatly given in the accompanying manual. This includes an aluminium pre-filter that removes large granule dust, pollen, floating compounds and other pollutants. According to Voltas, this pre-filter can be washed and reused.  This is followed by the second filter with activated carbon + formaldehyde removal compound filters followed by the third antibacterial + HEPA compound filters. In all, the filters can kill bacteria in the air and can eliminate particles which are larger than 0.01 micron.

Also, there is a UV Sterilize light that according to Voltas kills a variety of bacteria using the 365nm UV Light. Voltas uses the UV Germicidal Lamp that can eliminate odour from smoke or mold. There is also an Ionizer setting, which when turned on, releases anions to make the oxygen negatively charged. Both the UV Sterilizer and Ionizer are turned on in auto mode by default and can be turned off with the touch of the button.

When turned on for the first time, it took close to a minute to read and display the level of PM2.5 in the air. It also displays the air quality in different colours - it illuminates green when the PM 2.5 is below 60, yellow when it is between 60 to 149 and red when it's above 150. I tested it on auto mode as well as different speed settings (3 speeds). The PM 2.5 came down under 40 and continued to stay when running at the highest fan speed. When used on auto mode, it constantly switched between the medium and high speed to keep the air quality under check. Ideal for a medium-sized room, it has a CADR of 320 m3/h.

Some additional yet handy features onboard include sleep mode where the machine continues to work but the display panel is turned off. I was also able to choose the time - duration for which the machine should run and go to sleep mode, starting with 30 minutes up to 12 hours (with each interval of 30 minutes). With so many illuminated touch buttons on the panel, kids in the house are going to be tempted to play around with these buttons. As a result, Voltas has added a child lock, which can be unlocked only after long-pressing the same button for three seconds. When I held the same button a little longer, say about five seconds, it showed me the running hours if the air purifier.

The Voltas VAP47TWO is a feature-rich air purifier that manages to bring down the PM 2.5 quickly. Addition of app support would have been a welcome addition.

Minus: No compatible mobile application

From smartphones, wearables, speakers to lighting - best consumer tech of 2019