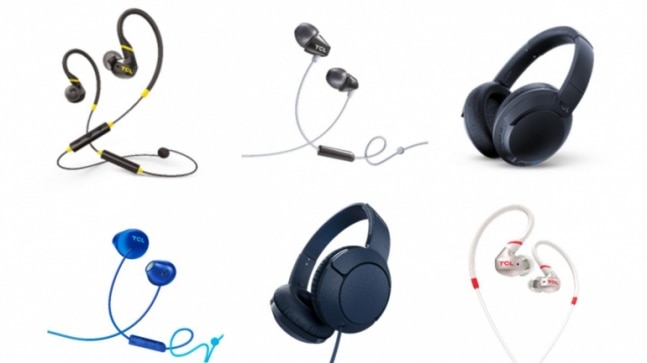 Moving forward, we have the TCL SOCL200 Earbuds, which are powered by 12.2mm drivers. TCL claims that these are good with bass and imaging. Moreover, it priced at Rs 499 in India,

The next wired earphone in this list is called SOCL300. This earphone is powered by 8.6mm audio drivers and is priced at Rs 599.

Now coming to the final wired earphone in the list, TCL ACTV100. This has the best bass output of the four earphones, the brand claims. The TCL ACTV100 is made available in Monza Black add Crimson White colour at Rs 699.

TCL's wireless neckband range includes TCL SOCL200BT, which makes use of Bluetooth 5.0 for connections. The neckband can run up to 17 hours when completely charged, TCL says. It also has fast charging support, a 15-minute charge that gives up to 3 hours of battery life.

The other neckband in this list is called TCL ACTV100BT. This neckband used Bluetooth 5.0 for connectivity and can run up to 12 hours on a single charge. The neckband is IPX4 rated to save it sweat and minor splashes. It is made available in Monza Black and Crimson White colours and is priced at Rs 1799.

Now there's one more neckband called TCL ELIT200NC. This wireless neckband is powered by a 12.2 mm audio driver and uses Bluetooth 4.2 for connectivity. Interestingly, it also features Active Noise Cancellation but is mostly found on high-end headphones. The TCL ELIT200NC is available in two colours Midnight Blue and Cement Gray and priced at Rs 2299.

The first headphone in the over the ear range is called TCL MTR200. This headphone is powered by a 32mm audio driver, which is expected to produce thumping bass without crushing other audio details. It comes with a mic and has buttons for music and call control. The TCL MTR200 is available in four colours which include Shadow Black, Slate Blue, Burgundy Crush and Ash White. Finally, the headphone is priced at Rs 1099.

The other and the last headphone in this list is called ELIT400NC. This headphone features active noise cancellation, which should enhance the listening experience, TCL claims. It offers 22 hours of playback time with ANC turned off and 16 hours with ANC on. The headphone is made available in two colour options Cement Grey and Midnight Blue and is priced at Rs 6999.

TCL to soon launch first Android 11-based Smart TV in India
Move over foldable devices, TCL likely to come up with expandable phones
BlackBerry Mobile to shut down as it ceases contract with TCL, no manufacturing after August 2020