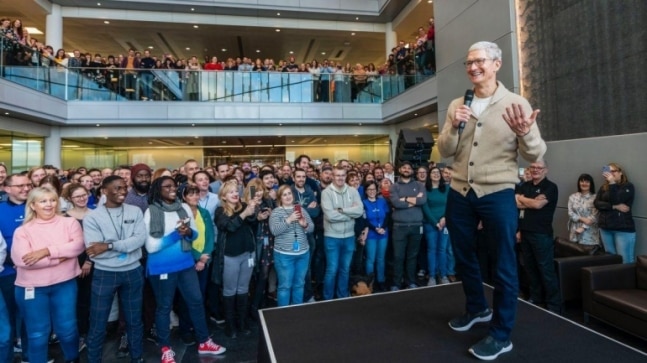 Apple CEO Tim Cook blasted social media apps that collect too much personal information and without naming any names, took dig at Facebook for its practices. Speaking at the CPDP 2021 on International Data Privacy Day, Cook said no information is too private or personal to be collected and then monetised by targeting the consumer. He said, "The end result of all of this is that you are no longer the customer, you're the product."

Cook's statement comes a day after Facebook accused the Cupertino-based giant of anticompetitive conduct. Facebook CEO Mark Zuckerberg also alleged that Apple has a vast catalogue of paid apps and is ramping on its own digital advertising business. During the earnings call, Facebook Chief even said that Apple has "every incentive to use their dominant platform position" to interfere with how other apps work.

Cook raised some questions for users of social media apps. "The fact is that an interconnected ecosystem of companies and data brokers, of purveyors of fake news and peddlers of division, of trackers and hucksters just looking to make a quick buck, is more present in our lives than it has ever been," he said.

Cook talked about a new paper called "A Day in the Life of Your Data" which Apple released recently and it reveals how everyday apps contain an average of six trackers. "This code often exists to surveil and identify users across apps, watching and recording their behaviour," he explained.

He took references of social media app users who often use these apps to pass the time and post-check-in details with location or photos or contact list details. "Some may well think that sharing this degree of information is worth it for more targeted ads. Many others, I suspect, will not, just as most appreciated it when we built similar functionality into Safari limiting web trackers several years ago. We see developing these kinds of privacy-centric features and innovations as a core responsibility of our work. We always have, we always will," Cook added.

"It is long past time to stop pretending that this approach doesn't come with a cost — of polarisation, of lost trust and, yes, of violence. A social dilemma cannot be allowed to become a social catastrophe," he said.

Facebook and Apple are steadily getting into a dispute over the new implementation of privacy notifications that Apple will start sending to its users when apps try to use ad-targeting tools that weren't mentioned while initially taking permission from users. Earlier this week, Google announced that it was switching up app privacy for iPhone users to prepare for iOS 14 policy changes.

In June last year, Apple said that it would implement a new iOS privacy update to show how apps are tracking users. These updates will give iPhone users more control of information collected earlier without even notifying the user. iPhone users will have more control over location data and other indicators when apps try to use microphone or camera without permission with the policy change.

Apple has already implemented one update that shows orange and green dot on the status bar when an app uses a camera or microphone, respectively.

The new policy will also include labels for app permissions to tell users how much data they request. In a bold move, Apple has revealed that it will label these indicators as "Data Linked To You" and "Data Used to Track You" which could be a considerable loss for social media apps.