The BSE Sensex rose over 2,000 points in intraday trade and NSE Nifty breached 14,000 levels as investors cheered Budget proposal to raise FDI limit in insurance to 74 per cent, crappage policy for vehicles, as well as privatisation of two nationalised banks 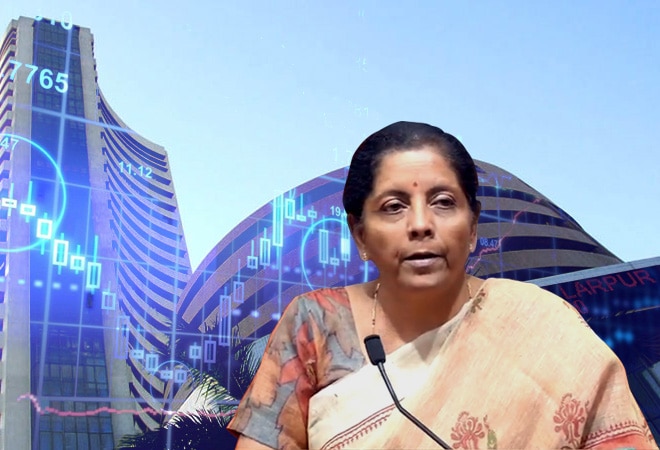 The BSE benchmark Sensex rises over 2,000 points after Budget announcements

Indian stock market gave thumbs up to Union Budget 2021, with BSE benchmark Sensex rising over 2,000 points in intraday trade and NSE Nifty breaching 14,000 levels. The market rally was driven by gains in banking, financial and auto stock. Taking cues from Budget announcements, Sensex surged as much as 2,096 points to hit day's high at 48,381. Similarly, Nifty rose 580 points to hit intraday high of 14,214.

The investors cheered the Budget proposal to raise in foreign direct investment (FDI) limit in insurance from 49 per cent to 74 per cent, scrappage policy for vehicles, as well as privatisation of two nationalised banks and proposal of monetisation of assets. Absence of the much-feared COVID cess and the surcharges on Income Tax also boosted market sentiment.

Commenting on Budget announcements, VK Vijayakumar, Chief Investment Strategist at Geojit Financial Services said, "This is indeed a bold growth-oriented budget. Absence of the much-feared COVID tax and the surcharges on Income Tax is a great relief. Privatisation of 2 nationalised banks and proposal of monetisation of assets like land are clear positives. Raising FDI in insurance from 49 per cent to 74 per cent is welcome. Market response to the budget reflects growth optimism. In brief, the FM has presented a pragmatic, bold and visionary budget in these difficult times."

Hike in FDI limit in insurance to 74%

Shares of insurance stocks surged up to 5 per cent on the BSE after Finance Minister Nirmala Sitharaman, in her Budget 2021 speech in the Parliament, announced hike in foreign direct investment (FDI) limit in the sector to attract more foreign funds. The FM proposed increasing the FDI limit in insurance to 74 per cent in the Budget 2021. Currently, the FDI limit is capped at 49 per cent. She also proposed to allow foreign ownership and control with certain conditions. The finance minister proposed an amendment to the Insurance Act for the same.

Shares of public sector banks rose up to 3 per cent after Sitharaman proposed divestment and bank recapitalisation plan to boost banking sector. Shares of Central Bank of India rose over 5 per cent, followed by SBI, Bank of Baroda, Canara Bank, among others. The Nifty PSU Bank index was up about 3 per cent.

In her Budget speech, the FM announced strategic divestment in two public PSU banks and one insurance company, in the next fiscal year. She added that the legislation required for disinvestment in the PSBs will be brought in the ongoing Budget session of the Parliament. She also announced further capital infusion of Rs 20,000 crore for state-owned banks.

Shares of auto companies rose upto 6 per cent after Sithraman announced scrappage policy. Reacting to the news, shares M&M rose over 6 per cent, followed by Tata Motors, Hero MotoCorp, Maruti and Bajaj Auto among others. The BSE Auto index was up 3.20 per cent at 22,836.25.

Sitharaman stated that under the voluntary vehicle scrapping policy, personal vehicles would undergo a fitness test after 20 years, whereas commercial vehicles would need to take it after completing 15 years. The finance minister further added that this will promote fuel-efficient as well as environment friendly vehicles while helping the government slash India's massive import bills.

Finance Minister Nirmala Sitharaman said in her budget speech said that Life Insurance Corporation of India (LIC) will go for an initial public offering in 2021-22. The much-awaited LIC IPO is likely to be the largest share sale on Dalal Street. Government which has been seen liquidity drying out in the capital market due to the coronavirus lockdown may conduct the IPO of the public sector insurer in tranches selling 25 per cent stake, according to reports. Currently it owns 100 per cent stake in LIC.

The government has budgeted Rs 1.75 lakh crore from stake sale in public sector companies and financial institutions, including 2 PSU banks and one insurance company, in the next fiscal year.