Are brands and marketers prepared to cater to the silver generation of India?
Ajita Shashidhar

It's about time consumer goods companies, car-manufacturers, holiday companies and many others look at targeting the silver age, that is, consumers above 45 years of age. Over 65 per cent of the Indian population today is below the age of 35 and companies across sectors are leaving no stone unturned to woo millennials, but the recent Economic Survey has cautioned about an increasing ageing population.

Demographic projections, as per the Economic Survey, show that India's population growth will continue to slow rapidly over the next two decades, growing less than 1 per cent during 2021-31 and under 0.5 per cent during 2031-41. This would mean a higher percentage of ageing population. 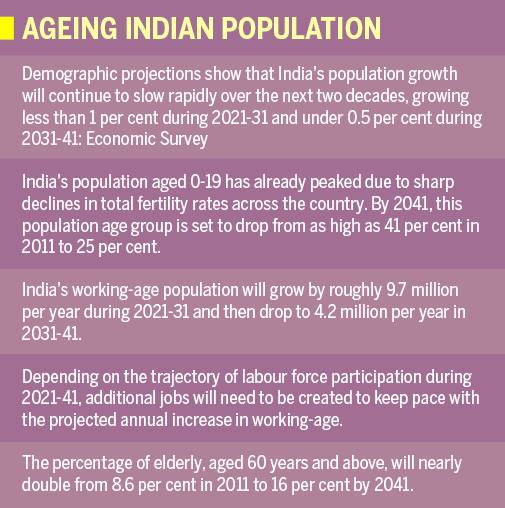 Are brands and marketers prepared to cater to the silver generation? They do smell the opportunity, but very few have acted on it, admit marketers. "There is so much focus on the younger generation that the silver has got missed out. Marketers can earn gold with the silver generation," says Devendra Chawla, MD, Spencer Retail. He points out that 75 per cent of the wealth in the UK and the US is owned by people above the age of 65.

"Lot of brands are targeting millennials, but there is an advantage of the matured population. The disposable income is much higher for a 45-plus and it's high time marketers take notice of it," adds Senior Marketing Professional Peshwa Acharya.

The number of senior citizens is growing twice the overall population and the addressable market is over 12 million even today.

ALSO READ: BT Buzz: IBC to get its mojo back

Gone are the days when a person turning 40 would focus on saving for his/her children. The silver age today is happy to spend on themselves, says Ayush Agarwal, Co-Founder, Seniority, an omni-channel retail format, targeted at the elderly. Agarwal says that his two-year old start up has served three lakh customers till date and 40 per cent of them are repeat customers. From holiday packages to pre-loaded music cards and gardening tools, the silver generation is the one with disposable income and is happy to spend.

Come 45, most people are empty nesters as their children become independent and go their own way. Moreover, 45-50-year olds are far more affluent today than how the previous generation was. "They are more independent in their older years and are willing to spend on themselves. They go on golfing and cruise vacations and are on the lookout for experiential products," points Kannan Sitaram, Venture Partner, Fireside Ventures.

Music company Sa Re Ga Ma is one of the few early movers which has made a success of targeting the silver generation with its product, Carvaan. Vikram Mehra, Managing Director, Sa Re Ga Ma, says that prior to the launch of Carvaan, they did a 23-city study of music consumption behaviour. "Almost everybody above the age of 35 told us that they loved our Kishore Kumar, Asha Bhosle and Jagjit Singh songs, but also mentioned that we don't give our music out. That surprised us a lot, as we were available on three streaming applications (Gaana, Saavn, Hungama). When we probed deeper, we realised that the moment this age group starts touching 35, the fear of technology begins to creep in. They are comfortable with smartphones and apps such as WhatsApp and Facebook. However, the moment the paid element starts coming in - like you can forward two songs for free and pay for the third or make your own playlist - people get thoroughly confused. They depend on their children to download music on their devices." The company's research with the 65-plus age group was even more surprising. "The only thing they said was that they didn't want to be dependent on their children. They craved for independence," points out Mehra, who says that the launch of Carvaan was the outcome of these insights. They launched a product, which looked like a yesteryear transistor and contained pre-recorded music from the Sa Re Ga Ma library. It had features that were easy to manoeuvre. Sa Re Ga Ma sold over 9 lakh units within a year of launch, as per company data.

The matured generation, says marketing expert Acharya, is more price-inelastic and brand loyal unlike millennials, who are largely promo and coupon driven and switch loyalties if a competition brand gives them a cheaper deal. "Matured people are brand loyal. If they like a brand they stick to it."

The brand loyalty factor, therefore, makes it an even more compelling reason for brands to focus on the silver age. But, one has to create products that fit the needs of the consuming class. For instance, keeping fit is a huge priority for the silver generation, but a regular gym can be intimidating. "A fitness centre, where the focus will be on overall fitness will be a better idea, as the target consumer will never want to do push-ups or build muscles," explains Sitaram.

Emirates, for instance, offers complimentary pick up and drop to its Business Class and First Class guest. A similar kind of paid service for the older generation could work wonders, says Acharya. "I am sure people will be willing to pay a premium for a pick-up and drop service."

Acharya cautions that marketing a brand in a way that it is only meant for the silver age could be disastrous too. "One shouldn't make the mistake of saying it is for old people, then they will never buy. One has to position the brand for all ages, which can be consumed by the matured audience too."

So, positioning a movie theatre for the elderly may not be a great idea, but creating a state-of-the-art viewing experience that offers personalised services that will come in handy especially for the silver age, could be a good idea.

It is time brands start thinking about coming up with different products especially meant for the silver generation. "It's a huge untapped market and it's never too late to start," says Chawla of Spencer Retail.