What are the business responsibilities of Mukesh Ambani's children?

Isha and Akash Ambani led the discussions in sealing the deal with Facebook and other tech titans like Google, Qualcomm and Intel 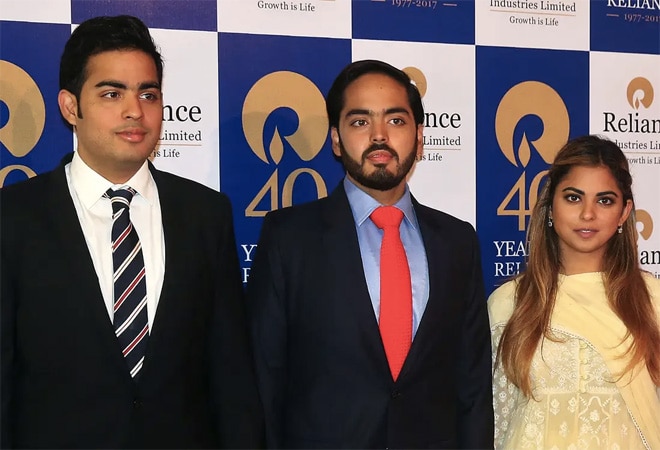 Mukesh Ambani's children -- Isha, Akash and Anant -- heirs to the Reliance empire are budding entrepreneurs. Twins Isha and Akash both have key roles in Reliance's newer businesses, including Jio. In fact, Isha and Akash led the discussions in sealing the deal with Facebook and other tech titans like Google, Qualcomm and Intel.

But even as key members of the company, what roles do they play in Reliance? Here's a lowdown on what each Ambani heir is up to:

ISHA AMBANI: The elder of the twins joined the family's telecom and retail businesses -- Jio and Reliance Retail -- as director in 2014. She holds two board and advisory roles as Additional Director at Reliance Foundation and Director at Reliance Jio. Isha Ambani's role in the conglomerate became more pronounced in the last two years. She was one of the lead negotiators with Facebook in its bid to acquire 9.99 per cent stake in Jio Platforms.

Isha Ambani reportedly flew down to Facebook headquarters in California along with Akash multiple times last year for the negotiations. It was Isha's statement that was released by RIL when Reliance Retail Ventures acquired the retail, logistics and warehousing businesses of Future Group for Rs 24,713 crore.

In fact, Isha is key in the conception of Reliance Jio. Her complaints of slow internet speed at home led to the creation of Jio in 2016. She is also the force behind popular fashion portal Ajio. Isha Ambani looks after the e-commerce venture JioMart as well. Isha recently set up the Reliance Arts Foundation.

Ambani's only daughter is involved in the branding and marketing of Reliance Jio and Reliance Retail.

Isha Ambani is a graduate from Yale, where she received her Psychology and South Asian Studies degrees. She worked as a business analyst with McKinsey and Company after she graduated from Yale. She also has a degree in MBA from Stanford University.

She is married to Anand Piramal.

Also read: Mukesh Ambani plans to set up 'family council' to hand over reins of Reliance Industries to 3 children

Akash is involved in the product development, messaging and chat, and other digital services applications of Reliance Jio. He also has a key role in the functioning of Indian Premier League (IPL) team Mumbai Indians. Akash is also involved in the football counterpart of IPL, known as Indian Super League (ISL).

He along with Isha Ambani was instrumental in sealing Reliance's deal with the tech giants.

Akash completed his IB Diploma Programme from Dhirubhai Ambani International School (DAIS) and moved to Brown University. He majored in business and economics from Brown.

He is married to Shloka Mehta.

ANANT AMBANI: The youngest of the three currently serves as an Additional Director on the board of Jio Platforms. Anant has been gradually brought into more key roles in the empire. Anant is active in social and foundational work at the Jamnagar refinery.

The youngest heir is reportedly being groomed for more social roles. He was part of the Shri Badrinath - Kedarnath Temple Committee after the Uttarakhand government approached the Ambanis for participation. He also represented the family and handed over funds of Rs 5 crore towards Maharashtra flood relief work to former Maharashtra Chief Minister Devendra Fadnavis.