Indian Air Force (IAF) pilot Abhinandan Varthaman returned home after three days of extreme political, diplomatic, and military confrontation between India and Pakistan. He was handed over to the Indian authorities around 9.30 pm at the Attari-Wagah border from where he was flown to the Palam airport in Delhi. Country's citizens gave a rousing welcome to their national hero as he set foot on the Indian soil. Prime Minister Narendra Modi said: "Welcome Home Wing Commander Abhinandan! The nation is proud of your exemplary courage." Wing Commander Abhinandan Varthaman will now undergo debriefing on Saturday. He will also undergo physiological and physical check-up in the presence of military and intelligence officials.

Catch all the latest news on India-Pakistan tension on BusinessToday.In Live blog.

4.05pm: Pakistan's Foreign Minister Shah Mahmood Qureshi said that the terror outfit, Jaish-e-Mohammed (JeM), has not claimed responsibility for the Pulwama attack and there's confusion if it was behind the strike. He told, "The confusion is that the leadership, when contacted, they said no. (The leadership has been contacted) by people over here. They deny that… they claimed no responsibility… there's confusion. There are conflicting reports on it," reports BBC.

3.50pm: Samjhauta Express services restored; Train to run from India to Pakistan on March 3, after the two neighbours agreed to operationalise services at their ends

3.38pm: For the BJP, the security of this nation is on the top of priority not elections, says BJP chief Amit Shah.

Union Home Minister Rajnath Singh: Entire world stands together against terrorism. No representative of India used to be invited to Organisation of Islamic Cooperation (OIC) but India's image has become such, that OIC invited India for the first time. It is a diplomatic victory. pic.twitter.com/KkaUcxfRzu

3.30pm: Indian Air Force protects the country, Air force pilots sacrifice their lives but our Prime Minister steals money from the Air Force, and puts it in Anil Ambani's pockets, it is a shame, says Congress President Rahul Gandhi.

Congress President Rahul Gandhi at a rally in Ranchi, Jharkhand: Indian Air Force protects the country, Air force pilots sacrifice their lives but our Prime Minister steals money from the Air Force, and puts it in Anil Ambani's pockets, it is a shame. pic.twitter.com/FnnZOtUYP2

3.28pm: What is 'debriefing' that Wing Commander will go through? Debriefing is a counselling session that assesses a soldier's psychological thinking and the state of mind. It is done to analyse the overall impact a particular incident on him. During debriefing of Wing Commander Abhinandan, officers from India Air Force and intelligence agencies will sit through informal chat sessions, during which the Wing Commander will reveal each and every detail since the day he ejected out of his MiG 21 and landed on the Pakistani soil.

2.57pm: Rajasthan family names newborn after Wing Commander Abhinandan Varthaman: A baby born on Friday evening, when IAF pilot Wing Commander Abhinandan Varthaman was about to be released by Pakistan, was named after him by a family in Rajasthan's Alwar district. "My daughter-in-law delivered baby boy last evening and we named him Abhinandan in honour of the IAF pilot. We are proud of the pilot and therefore we named him (the baby) Abhinandan," Janesh Bhutani, grandfather of the chid, told reporters, reported PTI.

2.55pm: Paksitan violates ceasefire violation: Pakistani troops on Saturday again violated ceasefire along the Line of Control in Rajouri district of Jammu and Kashmir, prompting strong and effective retaliation by the Indian Army, a defence spokesman said, reported PTI. The shelling from across the border started in Nowshera sector around 12.30 pm, ending over 12-hour-long lull in the border skirmishes which intensified after India's pre-emptive strikes on Jaish-e-Mohammed's terror camps at Balakot in Khyber Pakhtunkhwa province in Pakistan on Tuesday. A young woman and her two children were killed and several others, including two Army personnel, were injured in heavy shelling along the LoC in lower Krishna Ghati sector of Poonch district on Friday night, raising the death toll in the exchange of firing on the Indian side to four.

12.45pm: Masood Azhar, the founder of the terrorist organisation JeM, is suspected to be troubled with renal failure. He is under dialysis at an army hospital in Rawalpindi, Pakistan, reports PTI.

12.30pm: FM Arun Jaitley said, that when our Air Force reached Balakot in KPK before we could get any info some people, whom I call compulsive contrarians, found a new Balakot and started saying Balakot is along LoC.

FM Jaitley:When our Air Force reached Balakot in KPK before we could get any info some ppl started saying Balakot is along LoC.Some ppl whom I call compulsive contrarians found a new Balakot&didn't check that, that Bala Kote is in our Poonch.Why'd our forces attack our territory? pic.twitter.com/hRINtQS9so

12.15pm: Prime Minister Narendra Modi, while addressing a public function in New Delhi, said that the world watches every move of our country closely. He added that the Sanskrit word 'Abhinandan' would now get a new meaning due to what has happened over the past couple of days.

11.45am: United Nations' Secretary-General Antonio Guterres has welcomed the return of IAF's pilot Abhinandan Varthman from captivity in Pakistan.

11.14am: IAF Wing Commander Abhinandan Varthaman, who was released by Pakistan on Friday, spent the night at the Indian Air Force central medical establishment, reports News18. He also met his family members for a brief period of time. Today, he will debrief the military and Intelligence agencies.

10.42am: Wing Commander Abhinandan Varthaman along with Pakistani authorities at the Wagah border on the Pakistani side on March 1 (Photo: PTI). 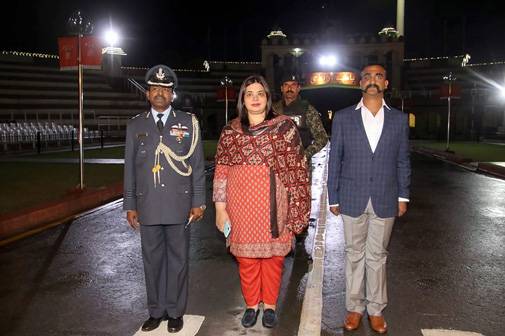 10.30am: The chiefs of the Indian Air Force and Navy will get Z-plus security cover after a fresh assessment of their threat perception by the security agencies, reported PTI. The decision was taken after a thorough review of the threat perception of IAF chief Air Marshal B S Dhanoa and chief of Naval staff Admiral Sunil Lanba in the wake of heightened tension with Pakistan. The chiefs of Air Staff and Naval Staff will be given the Z-plus security, a government official said. Army chief General Bipin Rawat has already been given the Z-plus security.

10.24am: UK on terrorism: Former UK foreign secretary Boris Johnson, during India Today Conclave 2019, says the core values of both India and the UK are superior to those of terrorists and those who are harbouring them. This is why, he says, it is important that both the countries succeed in defeating terror. Live stream here.

10.01am: Ranveer Singh says  Varthaman's bravery in the face of adversity was admirable and something that the country would never forget.

10.00am: Director-producer Karan Johar tweeted, "We salute your bravery and valour....we applaud your strength in the face of adversity."

We salute your bravery and valour....we applaud your strength in the face of adversity....#WelcomeHomeAbhinandan

"One of my closest friend says "A true soldier fights not because he hates what is in front of him, but because he loves what is behind him" ~ her husband (a close friend again) is in Air Force..."

There is no better feeling than Coming back Home, for home is the place of love, hope & dreams. Ur bravery makes us stronger. Eternally grateful. #WelcomeBackAbhinandanpic.twitter.com/NFTRINu6Mw

9.46am: Three villagers were killed, another injured in heavy shelling by Pakistani forces along the Line of Control in Poonch district of Jammu and Kashmir on Friday, reported PTI.

9.30am: BCCI on the return of brave Wing Commander: "You rule the skies and you rule our hearts. Your courage and dignity will inspire generations to come."

#WelcomeHomeAbhinandan You rule the skies and you rule our hearts. Your courage and dignity will inspire generations to come 🇮🇳 #TeamIndiapic.twitter.com/PbG385LUsE

8.50am: "India is proud of your courage and sense of duty, and above all your dignity," says President Ram Nath Kovind.

Welcome home Wing Commander Abhinandan Varthaman! India is proud of your courage and sense of duty, and above all your dignity. Wishing you and our entire Air Force every success in the future #PresidentKovind

8.48am: "Your dignity, poise and bravery made us all proud," says Congress president Rahul Gandhi.

🇮🇳 Wing Cdr. Abhinandan, your dignity, poise and bravery made us all proud. Welcome back and much love. 🇮🇳

8.47am: The entire Nation is proud of Wing Commander Abhinandan.

The nation is proud of your exemplary courage.

Our armed forces are an inspiration for 130 crore Indians.

8.29am: "May you continue to serve the nation and IAF with unparalleled passion and dedication. Best wishes for your bright future," says BJP Chief Amit Shah.

Dear Wing Commander Abhinandan, entire nation is proud of your courage and valour.

India is glad to have you back.

May you continue to serve the nation and IAF with unparalleled passion and dedication. Best wishes for your bright future.

8.27am: "The entire nation appreciates your valour and grit. You held your calm in the face of adversity," says Defenece Minister Nirmala Sitharaman.

Proud of you Wing Commander #AbhinandanVarthaman. The entire nation appreciates your valour and grit. You held your calm in the face of adversity. You are an inspiration to our youth. Salute. Vande Mataram.

8.25am: Petroleum Minister Dharmendra Pradhan on Friday those who challenged the country's pride and dignity were "biting the dust". "Those who challenged India's self respect, pride and dignity were defeated and are biting the dust now. Many people raised questions and criticised (Prime Minister) Narendra Modi, but now everything is being proved," he said, reported PTI.

#WelcomeHomeAbhinandan Your courage, grit and calmness in the face of adversity is an inspiration for all of us. Salute to your courage! May you continue to serve our country and the @IAF_MCC with unparalleled valour & unflinching vigil. Jai Hind !

The IAF lost one MiG-21 in the aerial engagement & the Pilot ejected safely, his parachute drifted into POJ&K where he was taken into custody by Pakistan Army. (4/5)

8.17am: IAF pilot Wing Commander Abhinandan Varthaman who set foot on the Indian soil on Friday evening said "It is good to be back in my country", reported India Today. The Indian Air Force pilot captured on February 27 by Pakistan following a dogfight between the two air forces in which his MIG-21 was shot down.