Farmers' protests Delhi: Farmers have upped the ante against the government and have announced Bharat Bandh on December 8 if their demands are not met 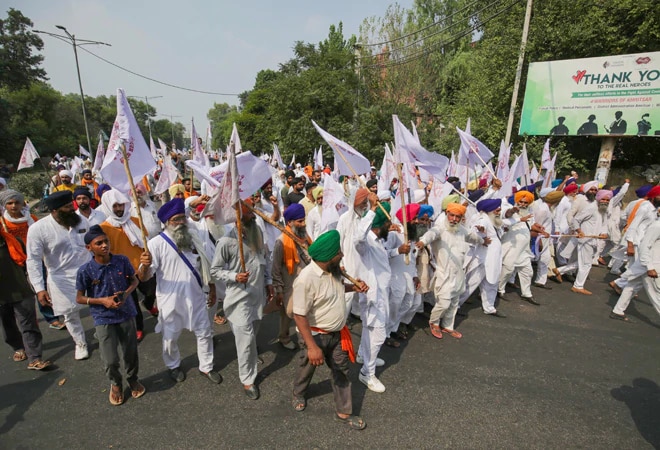 Kisan andolan in Delhi: Talks between farmer leaders and Union ministers have turned out to be futile so far

Farmers have upped the ante against the government and have announced Bharat Bandh on December 8 if their demands are not met. The protesters have said they will block all toll plazas and roads leading to Delhi as they strengthen their position.

Talks between farmer leaders and Union ministers have turned out to be futile so far. Farmers have rejected the Centre's proposal of amending the laws and have instead demanded that a special session of the Parliament be called to repeal the laws.

Here are the key highlights:

Fifth round of talks between Centre and farmers

A fifth round of talks will be conducted between Centre and farmers today. Four rounds of deliberations have been conducted between three Union ministers and farmer leaders , all of which have failed to break the deadlock between the two sides as the farmer protests enter their tenth day today.

Congress to bring a no-confidence motion in Haryana

Former Haryana chief minister Bhupinder Singh Hooda has said the Congress will bring a no-confidence motion on the recently passed farm laws in the Legislative Assembly. The Congress will urge the state governor to call a special assembly session in this regard.

A public interest petition has been filed in the Supreme Court, seeking an end to the ongoing farmers' protests in the national capital. The petitioner cited the Shaheen Bagh verdict and stated, "In view of the prevention of the community spread of the pandemic, it is very necessary to remove the gathering." The petition added that it was the duty of the state to deal with protestors and avoid inconvenience to the public.

DMK MP TR Baalu was the only leader to discuss the issue of ongoing farmers protests in Delhi at the all-party meeting chaired by Prime Minister Narendra Modi. It is also reported that this led to a heated exchange between Baalu and Parliamentary Affairs Minister Prahlad Joshi.

The External Affairs Ministry summoned the Canadian High Commissioner and stated that the ties between India and Canada could get seriously strained due to the comments of Canadian PM Justin Trudeau and other leaders on the ongoing farmers' protests.

After UK, Bahrain approves Pfizer-BioNTech vaccine for emergency use