Kathua case: Sanji Ram and and his friend Parvesh Kumar and Deepak Khajuria have been sentenced to a life term for the brutal gang rape and murder of an eight-year-old girl in Jammu and Kashmir's Kathua 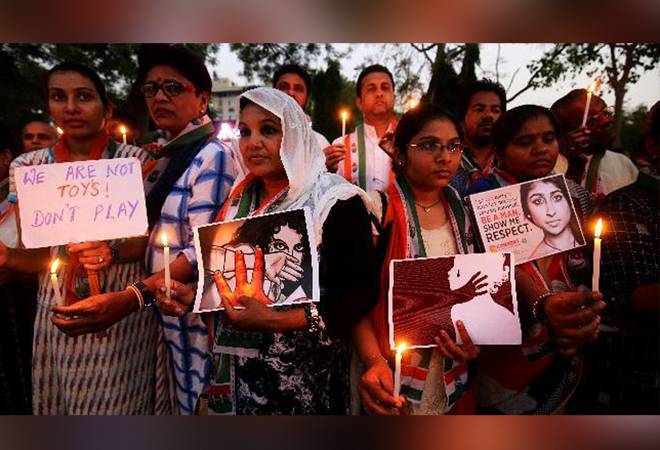 Kathua case verdict: The special court has pronounced life imprisonment of 25 years to Sanji Ram and his friend Parvesh Kumar and Deepak Khajuria

Six of the seven accused in the rape and murder of an eight year old nomadic girl in Kathua, Jammu and Kashmir have been convicted by a special court in Pathankot on Monday. Those convicted are Sanji Ram, the village head, his juvenile nephew Anand Dutta and two special police officers Deepak Khajuria and Surender Verma. Also convicted are Head Constable Tilak Raj and sub-inspector Anand Dutta, who allegedly took Rs 4 lakh from Sanji Ram and destroyed crucial evidence.

The seventh accused, Vishal, who is the son of main accused Sanji Ram has been acquitted.

The special court has pronounced life imprisonment of 25 years to Sanji Ram, who was believed to be the mastermind, and his friend Parvesh Kumar and Deepak Khajuria in the Kathua rape and murder case. Three cops -Anand Dutta, Tilak Raj and Surender Verma - were accused of destroying evidence and have been sentenced to five years in jail.

The in-camera trial had concluded on June 3, after which the District and Sessions Judge Tejwinder Singh announced that the verdicts would be delivered today, June 10.

The girl, who belonged to a Muslim nomadic tribe was kidnapped and held captive at a village temple in Kathua. She was drugged, starved and repeatedly raped for days before she was strangled and head bashed with a rock.

Her body was found in a forest area on January 17. Three days later, one of the accused was arrested by the police.

The case was eventually handed over to the Crime Branch because of nationwide outrage. A police sub-inspector and a head constable were also arrested for destroying evidence. Sanji Ram surrendered on March 20, 2018.

According to Crime Branch investigations, this incident was orchestrated to strike fear among the nomads and drive them out of Kathua.