The White House condemned the intensifying conflict and urged "both sides to take immediate steps to de-escalate the situation." 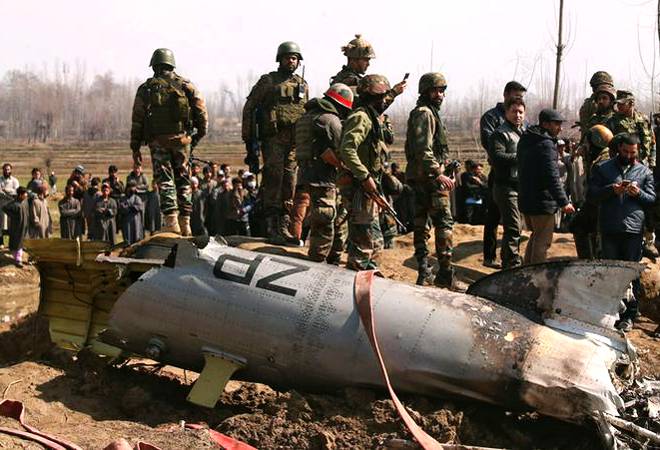 India and Pakistan both said they shot down each other's fighter jets on Wednesday, with Pakistan capturing an Indian pilot a day after Indian warplanes struck inside Pakistan for the first time since a 1971 war, prompting world powers to urge restraint.

Both countries have ordered air strikes over the last two days, the first time in history that two nuclear-armed powers have done so, while ground forces have exchanged fire in more than a dozen locations.

Tensions have been running high since at least 40 Indian paramilitary police died in a Feb. 14 suicide car bombing by Pakistan-based militants in Indian-controlled Kashmir, but the risk of conflict rose dramatically on Tuesday when India launched an air strike on what it said was a militant training base.

The White House condemned the intensifying conflict and urged "both sides to take immediate steps to de-escalate the situation."

"The potential risks associated with further military action by either side are unacceptably high for both countries, their neighbours and the international community," a National Security Council official said on condition of anonymity.

The Pentagon added to U.S. pressure for restraint by the foes, issuing a statement that said Acting U.S. Defence Secretary Patrick Shanahan is focused "on de-escalating tensions and urging both of the nations to avoid further military action."

Pakistan's envoy to the United States, Asad Majeed Khan, said Islamabad would like to see the Trump administration play a more active role in easing the crisis.

At the same time, he said the lack of U.S. condemnation of India's strike on Pakistan is "construed and understood as an endorsement of the Indian position, and that is what emboldened them even more."

Pakistan Prime Minister Imran Khan called for talks with India and hoped both sides could de-escalate.

"History tells us that wars are full of miscalculation. My question is that, given the weapons we have, can we afford miscalculation," Khan said during a brief televised broadcast to the nation. "We should sit down and talk."

The Pakistan government's official Twitter account released a video of a man it claimed was an Indian pilot who had been shot down.

The man, whom Pakistan has named as Wing Commander Abhi Nandan and whose face was bloodied and blindfolded, gives his name and service number before telling a man questioning him: "I'm sorry sir, that's all I'm supposed to tell you."

India's foreign ministry demanded the pilot's immediate release and said his treatment was a "vulgar display of an injured personnel of the Indian Air Force in violation of all norms of international humanitarian law and the Geneva Convention "India has not yet named the pilot.

In a second video circulating on social media, a screenshot of which was shared by the same Pakistan government account, the pilot was seen sipping tea while praising his treatment by the Pakistani military.

Reuters could not independently verify the second video's authenticity.

Pakistan and India have fought three wars since independence from British colonial rule in 1947, two over the disputed Himalayan region of Kashmir, and went to the brink of a fourth in 2002 after a Pakistani militant attack on India's parliament.

The latest escalation marks a sudden deterioration in relations between the two countries, both of which claim Kashmir in full, but only rule in part.

As recently as November, Pakistan's Khan spoke of "mending ties" with India.

The conflict also comes at a critical time for Indian Prime Minster Narendra Modi, who faces a general election in a matter of months.

Modi's decision to order air strikes could benefit him politically, according to analysts and pollsters, but he was accused on Wednesday by opposition parties of capitalising on conflict.

Congress leader Rahul Gandhi criticised the "blatant politicisation of the sacrifices made by our armed forces," in a joint statement by 21 opposition parties, the first time they have broken ranks with the government over the issue.

"I expressed to both ministers that we encourage India and Pakistan to exercise restraint, and avoid escalation at any cost," Pompeo said in a statement on Wednesday.

"I also encouraged both ministers to prioritise direct communication and avoid further military activity," he said.

China and the European Union have also called for restraint.

Many of the facts in the latest series of engagements are disputed by the two sides.

Major General Asif Ghafoor, spokesman for the Pakistan armed forces, said two Indian jets had been shot down after they entered Pakistani airspace while responding to a Pakistani aerial mission on targets in Indian-controlled Kashmir.

One of the jets crashed on the Indian-controlled side of the de facto border in Kashmir, known as the Line of Control, and the other on the Pakistani side.

Ghafoor said the Pakistani aircraft had carried out the strikes in response to India's air strike the day before but had taken deliberate action to ensure no casualties were caused.

The Pakistani jets had locked on to six targets, in a demonstration of their capacity to hit strategic installations, but deliberately fired into open spaces where there would be no casualties.

"This was not a retaliation in true sense, but to tell Pakistan has capability, we can do it, but we want to be responsible, we don't want an escalation, we don't want a war," Ghafoor told a news conference.

One of the aircraft fell on India's side of Kashmir, while the second came down in Pakistani-held territory with two pilots captured, he added.

Raveesh Kumar, a spokesman for India's foreign ministry, gave a different account, telling a news briefing that the Pakistan air strikes on military targets had been "foiled."

India shot down one Pakistani plane that landed in Pakistani territory, Kumar said, adding that it had lost one of its own planes, not two, with the pilot "missing in action."

"Pakistan has claimed that he is in their custody. We are ascertaining the facts," Kumar said.

Pakistan denies it lost a plane in the encounter.

At the Pakistani briefing, Ghafoor produced photographs of weapons and identity documents he said were carried by Indian pilots.

Pakistan initially said that two Indian pilots had been captured, before clarifying it only had one in its custody.

The Indian air force has ordered Kashmir's main airport in Srinagar along with at least three others in neighbouring states to close, an official said.

Pakistan shut its airspace, with commercial flights in the country cancelled.

Flights from the Middle East and India were also affected. Air Canada said on Wednesday it has temporarily suspended service to India, following a decision by the Pakistani government to close its airspace.

In a separate incident, police officials in Indian-occupied Kashmir said that four passengers and a civilian had died after an Indian aircraft crashed in Kashmir. A partial tail number from the craft seen by a Reuters witness showed it to be an Mi17 military helicopter. The cause of the crash was unknown.

The aerial engagement followed overnight artillery fire by both sides. Pakistan used heavy-calibre weapons along the Line of Control, a spokesman for the Indian defence forces said on Wednesday.

"The Indian Army retaliated for effect and our focused fire resulted in severe destruction to five posts and a number of casualties," the spokesman said.

Five Indian soldiers suffered minor wounds in the shelling that ended on Wednesday morning, he added.

Officials on the Pakistani side said at least four people had been killed and seven wounded, including civilians, with thousands evacuated and schools closed in border areas.