Decoding Slowdown: Why continued low inflation is not good for economy

Rural and urban inflation sliding down when the headline interest rate (RBI's repo rate) has also been falling reflects all is not well with the economy. It calls for a comprehensive policy response to spur income and investment to revive consumption demand Consumption has been the mainstay of India's growth story contributing the maximum to its GDP. In recent years, however, its contribution has moderated quite a bit.

Consumption has been the mainstay of India's growth story contributing the maximum to its GDP. In recent years, however, its contribution has moderated quite a bit. The RBI's annual report of 2018-19 shows the share of consumption falling from 71.5% (of the GDP) during FY12-FY14 to 69.8% during FY15-FY19. Commenting on this fall, the RBI report said PFCE "weakened more than initially anticipated" and cut across both rural and urban areas - indicating that the slump is widespread in the economy.

The fall in rural consumption demand was reflected in the "sharp contraction" in sales of motorcycles and tractors by 8.8% and 14.1%, respectively, in Q1 of FY20, while that of urban consumption demand in contraction in car sales, domestic air passenger traffic and production of consumer durables like TV sets, hand tools, passenger vehicles, electrical apparatus and two-wheelers. 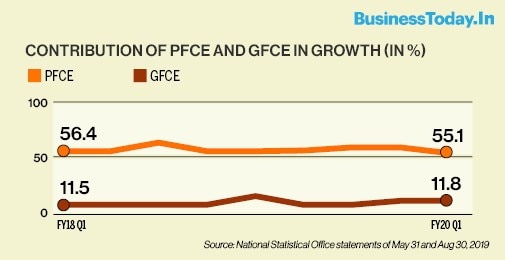 Though GFCE showed an improvement in the last two quarters, the RBI report said revenue expenditure of the central government - as a proxy of GFCE - "was lower at 1.7% (in Q1 of FY20) compared to 14.5% a year ago". It said the slowdown "is sharper in the case of state governments".

Reviving consumption holds the key to restoring economic growth. The Economic Survey of 2018-19 acknowledged this by observing that the performance of consumption would be "crucial in deciding the growth path of the economy".

Too low inflation is not such a good idea

The fall in consumption demand in rural and urban areas is reflected in the falling inflation in both the areas too. Food inflation has seen a sharp decline with consumer food price index (CFPI) falling to 0.1% in FY19. This is a clear reflection of falling farm income and wages and has serious implications for the economy as close to 50% of the total workforce is dependent on the agriculture sector. The continued declining trend would indicate that inflation targeting may have gone too far.

The Economic Survey of 2018-19 pointed to this when it said: "Pick up in food prices should help in increasing rural incomes and spending capacity and hence rural consumption demand."

Prof DK Srivastava, an eminent economist and former director of the Madras School of Economics, says inflation sliding down when the RBI repo rate (interest rate at which the central bank lends to other banks) is near historical low of 5.4% - going down from 8% in June 2014 - shows consumption demand is falling.

He is not averse to easing pressure. "Even within the policy range of 2-6% of inflation, we can target CPI inflation close to 5%. Then we will have a higher nominal GDP growth, which will give more tax revenue and create more space for increasing capital expenditure. More capital expenditure would augment demand and also increase real growth rate," he says.

Recently, former vice chairman of the Niti Aayog Arvind Panagariya too called for a moderate inflation rise to 5-6%, saying that low inflation limits the space for relative prices to move.

Per capita income in relation to per capita consumption

That income has been going down in both rural and urban areas is no secret. A 2019 study of the SBI, Root Cause of the Current Demand Slowdown, pointed at a substantial decline in both urban and rural wage growth as the "most crucial" reason for the economic slowdown.

It said both urban and rural wages were growing in high double digits until a few years ago. Growth in urban wages (using corporate wages as a proxy) peaked at 20.5% in 2010-11 and then went down to single-digit in 2018-19. Similarly, rural wages peaked at 27.7% in 2013-14 and went down to less than 5% in last three fiscals. It explains that this high growth phase was unsustainable (a deadly cocktail of wage-inflation nexus).

An analysis of growth in per capita net national income (NNI) and per capita private final consumption expenditure (PFCE) throws up an interesting feature. Though both are lower than their FY17 levels, per capita PFCE increased in FY19 - from 6% to 6.8% - while per capita NNI continued to fall - from 6.8% in FY17 to 5.7% in FY18 and 5.6% in FY19

Prof Srivastava says this could be due to fall in household savings - another indication of fall in income and investment in the economy.

The RBI's bi-monthly consumer survey of July 2019 (carried out in 13 major cities with 5,351 responses on households' perceptions and expectations) reflects gloom in the general economic outlook and in perceptions regarding present and future consumption spending. It also shows households' confidence in the rise in income is also declining. What all these indicate is that the economic slowdown is pervasive and requires a comprehensive approach, rather than a piecemeal one, to spur income and investment to revive consumption demand.