Mining the cryptocurrency requires a staggering amount of energy, which is contributing to global warming. See how:

Bitcoin is the newsmaker of this year. Virtual or real, it is perhaps the most valued currency in the world. The world might be awed at Bitcoin's meteoric rise, but its rise has not made it very green.

A recent report published in November says that activity related to the cryptocurrency exceeded the energy consumption of 159 countries around the world. 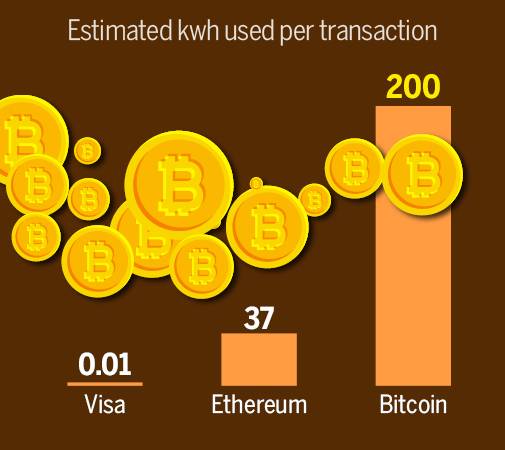 As of December 19, the 'miners' have consumed 34.96 TWh (1 TWh= 100 crore units) of electricity, according to the Bitcoin Energy Consumption Index by Digiconomist.

So, if bitcoin was a country, at current value, it would stand at 58th position in the world, next to Qatar in terms of consuming electricity in a year.

In fact, the total energy consumption is more than that of Ireland which uses 23.79 TWh of electricity and North Korea at 11.24 TWh. Mining bitcoins is like solving a math riddle, that becomes difficult as we go into the advanced stages. Coins are awarded to computers that verify transactions. The process is like a lottery, where you have many hits and misses. Therefore, it will require a number of attempts to get it right. More number of tries equals to greater consumption of electricity.

According to the Intergovernmental Panel on Climate Change, for every unit of electricity produced in the world, on an average, 500 grams of CO2 is exerted. So, if you break it down, total CO2 emission due to bitcoin mining is 14.75 million tons.

Countries that consumes most electricity

Nearly three-quarters of all major mining pools are based in just two countries, China and the US, a study by Cambridge Centre for Alternative Finance (University of Cambridge) and Visa showed. Of this, 58% are in China, followed by the US with 16%.

Cheap power often means dirty power, and in China, miners draw on low-cost coal and hydroelectric generators. According to energy analysis, one of the mines in China's carbon footprint was same as a Boeing 747.