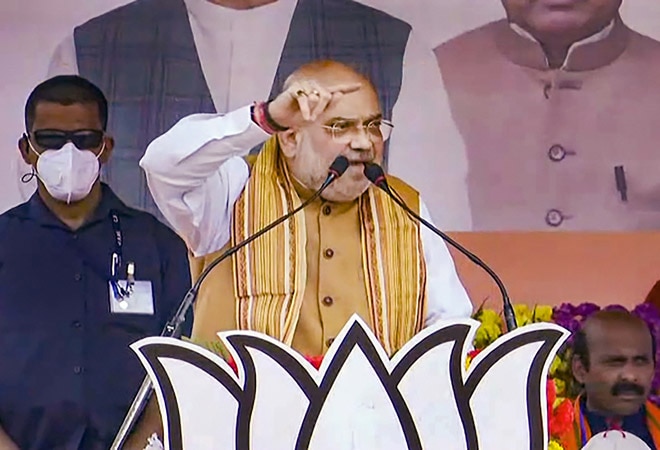 Shah, while presenting the election manifesto, said, "The core idea of this manifesto is building a Sonar Bangla. For centuries, Bengal led the country on several fronts - spiritually, science, politics, social reforms, education or art. Bengal used to be ahead in every sector."

Shah said that the BJP has decided to call their manifesto a 'Sankalp Patra' "because it is not just a manifesto but a resolution letter for West Bengal by the country's largest party."

Shah added that the BJP's manifesto emphasises on women's safety, infrastructure development, providing better healthcare services and setting up industries in the state.

"We have decided to provide free education to women from KG to PG," he added. BJP also promises 33 per cent reservation for women in state govt jobs.

Shah, lambasting the current Trinamool Congress (TMC) government, said, "At one time, 30 per cent of India's industrial production came from Bengal. Today, it has fallen to 3.5 per cent. 73 years of ill-governance is the reason for this."

Shah said that the BJP promises to provide every fisherman Rs 6,000 annually "just like our farmers".

The manifesto also talks about the implementation of the Ayushman Bharat scheme in the state. It promises three new All India Institute of Medical Science (AIIMS) to be built in North Bengal, Jungle Mahal and  Sunderban.

There is also a promise of one job per family, implementation of 7th pay commission for state government employees and PM-Kisan arrear of Rs 18,000 for 75 lakh farmers.

Shah said, "Citizenship Amendment Act (CAA) will be implemented in the first Cabinet and refugees who have been staying here for 70 years will be given citizenship. Each refugee family will get Rs 10,000 per year for 5 years through DBT when BJP forms govt in West Bengal."

Also Read: 'Taxpayers free to use ITC': FinMin on reports of pressure tactics use by GST officers